The Silk Road and the Wine Road 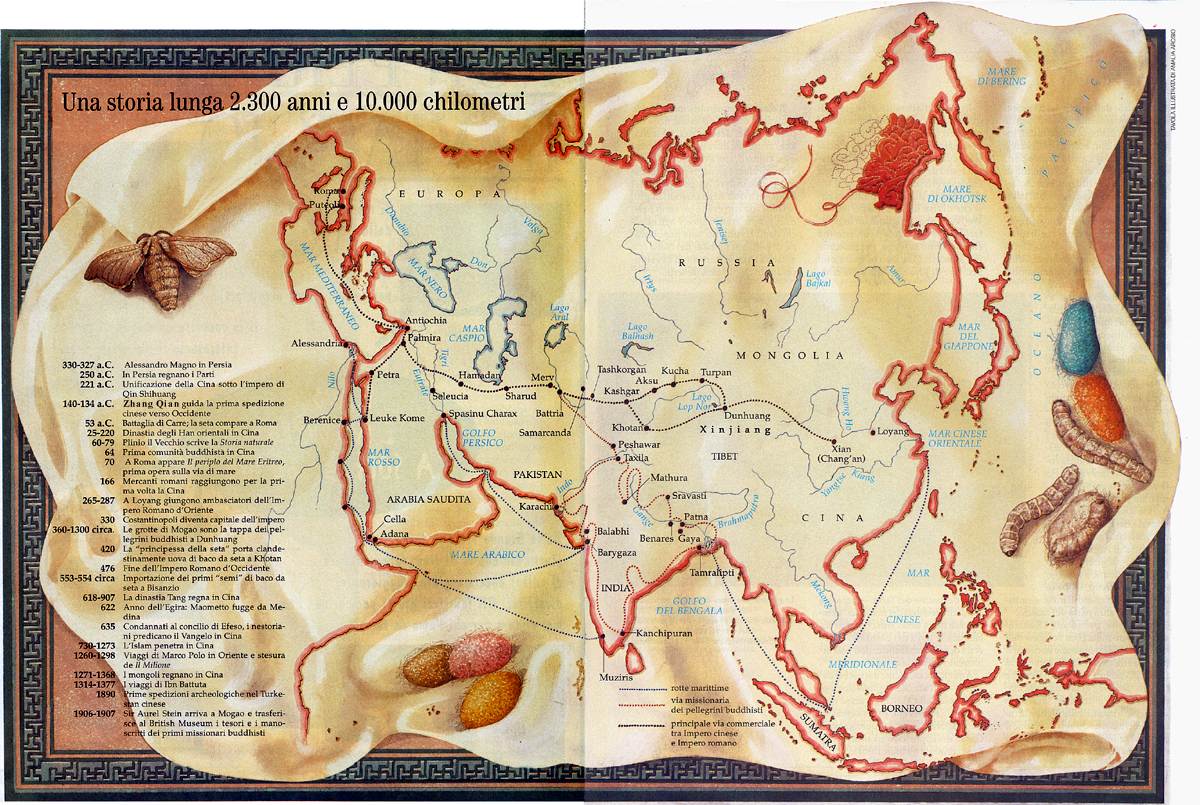 Only an important archeologist could speak about what happened three or four thousand years ago, because that is when we could learn something about the silkworm. Chance helped men in that case like in many other important scientific discoveries, and it was so extraordinary that it was told as a fairy tale.

“…the young wife of a praiseworthy Chinese emperor, Lei-Tsu drank her tea in the garden, under a mulberry tree, a cocoon fell in her mug and remained immersed in the hot liquid, she grabbed it and it began to come undone in a very long thread that meter after meter covered everything”.

From that moment on in China those small worms that devoured mulberry leaves where cared for and cherished, they wrapped in slime with strange movements and became precious cocoons, source of richness. That thread, once woven, made dresses worthy of an emperor and his wives, and worthy of the kimono of samurai. They had discovered how to do it and kept it a well-hidden secret.

To reach the wealth of the far East courageous men and curious travelers created what is called “the Silk Road”, a path that connected East and West passing through sea, land and rivers along 8000 km., from Bisanzio to the far Japan.

At the time of Justinian some monks had already smuggled out and brought to Italy the cocoons and specimens of the plant, the mulberry, from which the silkworm fed off.

It was the 13th century when Marco Polo and his family, assiduous travelers, had already traveled The Silk Road several times and learned the Chinese technique of silkworm breeding.

The rules of breeding and spinning were passed on for centuries, not only in the Veneto region but also in Lombardia, Tuscany and in the Marche. Breeding silkworms became a collateral activity to the cultivation of vineyards and it gave work and profit for several centuries, until industrial machineries appeared.

Soave, Verona, the Garda lake have a lot to say to wine lovers, but maybe it is less known that in those regions silkworms were bred and today still we can admire old machines and deposits where the laborious spinning process and silk thread production took place.

Silk always represented luxury in clothing and in home-décor so citizens round up their salary by breeding silkworms in their houses as well, for example under their roof where the silkworms found perfect conditions to develop and they also grew the “mulberry/bombyx mori” which nourished those worms.

It is in Soave that the memory of that time is guarded, where the vineyards are supported by mulberry plants, and produce a wine called “Gelso 300 anni”, there you can follow an itinerary through a now lost world of farmers – artisans.

The two roads meet, one, the wine road in expansion and the other, the Silk road, only tourism-oriented.

With the recent decline of the silk industry, in Italy in particular the breeding of the mulberry arrived at a stop and the specimen risks the extinction.

In Italy from North to South there are many excellent examples in this field: it would be a very long list from Como to Florence to Caserta, up to Calabria and Sicily, where the agricultural and industrial world in time have left behind a large number of places and memories of this art.

There’s a lot to say on this fascinating history, just like there are a lot of moths that must die to destroy the cocoon and come to life. In the history of the beauty of this world, human discoveries like the production of such a precious good, cost the life of many living beings, especially of these moths because from four to eight worms are necessary in metamorphosis to produce a single thread of raw silk.