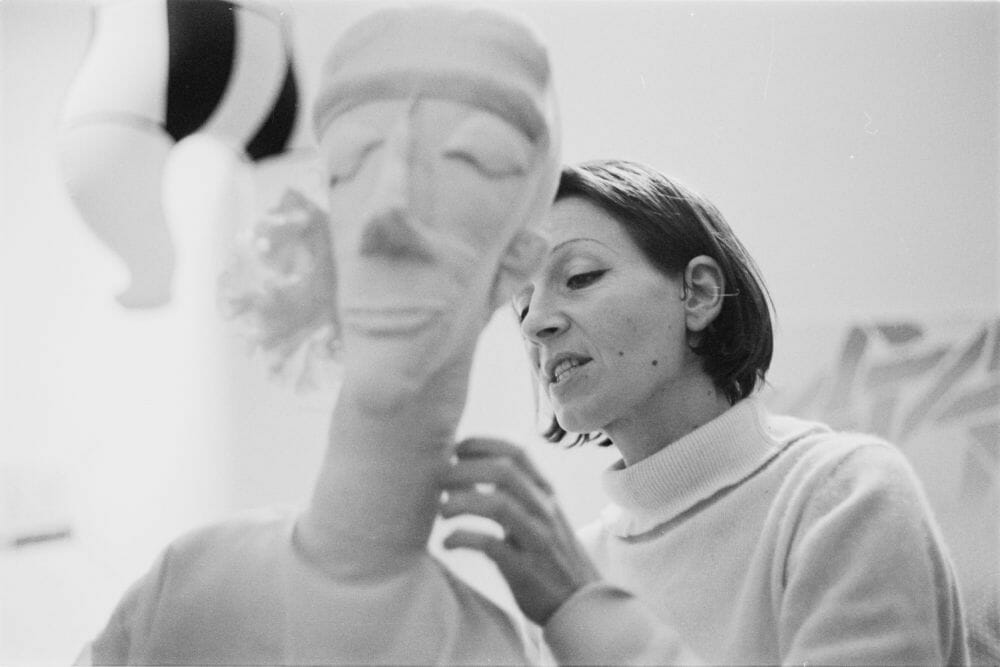 At the Pompidou in Metz : Le Musée sentimental d’Eva Aeppli
an exhibition curated by Chiara Parisi, director of the museum, and Anne Horvath
May 7, 2022 – November 14, 2022
Info: https://www.centrepompidou-metz.fr

This first retrospective in France dedicated to Eva Aeppli is an invitation to discover her sewn work, which constitutes the high point of her art. In her “musée sentimental”, like that created by Daniel Spoerri at the Centre Pompidou in 1977, her works dialogue with those by members of her close circle, with her fantasised influences and with those of her successors. It features creations by Jean Tinguely, Niki de Saint Phalle, Louise Bourgeois, Annette Messager and Sarah Lucas, highlighting how the Swiss sculptor’s art continues to exert a strong influence on the contemporary scene. Each of her fabric figures – with their striking silent cries, their simple yet highly expressive features, their scars formed by stitching – flood the viewer with ambivalent feelings in an encounter that will not leave them unaffected.

The numerous visiting cards distributed by Eva Aeppli – in which she presents herself as “Consultant in Wouzi and Wouzi-Wouzi”, “Philosopher”, “Professor of life” and “Acrobat between sky and earth” – reveal the extraordinary mind of this still little-known artist.
Born in 1925 in Zofingen, in Switzerland, Eva Aeppli grew up in Basel, where she followed the anthroposophical teachings of the Rudolf Steiner school. The period of the Second World War would have a lasting effect on the young artist who, under the influence of her father, followed with anguish the Nazis’ progress across Europe.
This traumatic experience was the source of Eva Aeppli’s unshakeable activism, embodied in 1968 by the installation she created as a homage to Amnesty International, and then by the creation of her own foundation (the Myrrahkir Foundation, based in Omaha), which fought oppression, poverty and ignorance. The human being and the universality of the human condition were the constant common denominator of her creations.
Aeppli settled for good in France in 1952, initially sharing a studio with her husband Jean Tinguely, in the impasse Ronsin, where Constantin Brancusi lived at the time. Her friendships in Paris – with Daniel Spoerri, Jean Tinguely, Niki de Saint Phalle, Jean Pierre Raynaud and Pontus Hultén were incorporated into her Les Livres de vie [The Books of Life], in which, between 1954 and 2002, she accumulated photographs of her works, correspondence with her entourage and the artistic projects of her friends. These notebooks sketch out Eva Aeppli’s complex world, which drew as much off solitude as dialogue with her circle of close friends, with whom she collaborated on occasion.
Connected to the Parisian art world, while refusing to join the movements that were then in vogue, she created a deeply original body of work at a time when Nouveau Réalisme, Pop Art and Abstraction Lyrique reigned supreme. While her first self-portraits, which took the form of charcoal drawings, reveal the artist’s personal feelings, the emotions inspired by the outside world were subsequently expressed in large oil compositions. Described by the artist as veritable “extensions of her paintings”, the first fabric figures made in the 1960s followed on from the canvases. The humansize fabric sculptures were subsequently brought together in large installations, including The Table, the Group of 13 and the Group of 48, which will be on display in this exhibition.
In 1976, her sculptures were given pride of place in the Swiss pavilion at the Venice Biennale and at the ARC in Paris. Above and beyond the institutional recognition, this year also marked a decisive turning point in her career as an artist when she rejected the bod in order to concentrate solely on the faces and hands of her sculptures. The cycles of heads – The Planets (1975–76), The Signs of the Zodiac (1979–80) then Some Human Weaknesses (1993–94) – made out of silk then cast in bronze, demonstrated Aeppli’s acute observation of human physiognomy and her passion for the multiplicity of human characters.