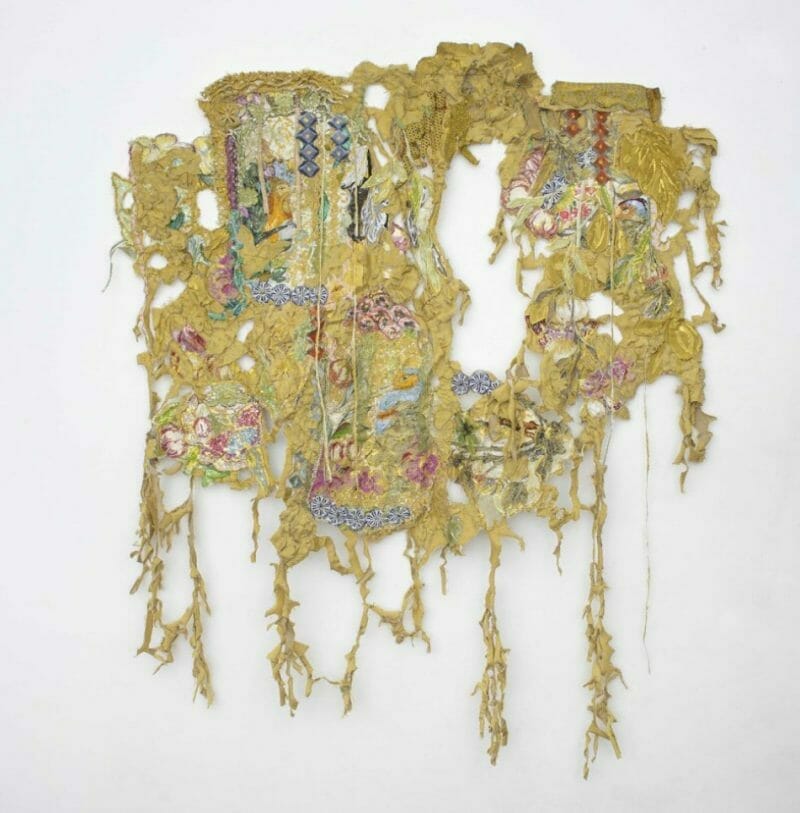 A visual artist originally from Argentina, Lia Porto obtained a law degree, which, early in her life, led her to work as a lawyer; later on, though, she decided to pursue her calling for art. Painting became the starting point for a new study pathway she developed through painting, textile and etching workshops.
Deconstructing the traditional notion of painting, Porto creates layered and complex textile works, with which she addresses issues of cultural identity, cross-cultural influences, gender roles, memory and social rules.

Her works have been exhibited in numerous international exhibitions in Argentina and the United States and have won significant awards.

How did your path in the art world begin? When did you realize you were an artist?

I began expressing myself trough writing when I was a child.  I remember writing poems at 7 years old.  At 12 I wrote a book with a friend called Poemas de a dos. It was a very simple book, kind of a fanzine with our poems and some illustrations done by a couple of friends.

For many years I saw myself as a poet. But at a certain point I felt like words were insufficient and I started painting.  The discovery of painting was a key point in my life. It was something that really surprised me.

What themes do you investigate through your studio work and artistic research?

I have always been very concerned about nature, and how we operate as part of it, how we inhabit the world, how we coexist.  For many years I worked with some utopian aspects of nature. Then, as I deconstructed the notion of painting in its traditional forms and I included textile in my practice, I also deepened my exploration into other aspects of nature like it’s relationship with the domestic world.   The domestic world to me is a primordial and relevant space.  Textiles allow me to get in direct contact with elements that comes from it. I´m very conscious about the information that is embedded in matter.  By using recovered material, I create a conversation with what is imprinted in the material itself.

In some recent works I´ve been exploring cultural crosses and transcultural influences.  My aim was to test in the pieces the possibility of coexistence in cooperation, and this idea of widening the range of a particular cultural element by creating a dialogue with something that is diverse.  At the same time, it´s very clear to me that the elements that I ´ve been collecting and using in the works carry memories that are imprinted onto them by usage.  So I ´m working not only with what is visible (like the images of a fabric) but also with what is not so evident like the emotions and memories that are embedded.   I´m working in a way that the pieces are kind of anachronism, I want to take them out of chronological time.  They belong to a present that reunites the past and the future.

There are a lot of layers in my conceptual exploration: from aspects related to cultural crosses and transcultural influences as well as memory, gender role and social standards and aesthetics.

How does the Italian cultural heritage of your maternal family, inspire your practice and is reflected in your work?

My grandparents were Italian.  I had a very close relationship with my nonna. She died when I was 4.  At that time, we lived in the isolated Patagonia, in the south of Argentina.  All her Italian stuff was at home, mainly textiles, most of them were handmade: beautiful blankets, curtains, tablecloths, even her own clothes.   I always considered them kind of treasures, and I kept those pieces even very small things like a lace or a part of an embroidery. It was later on, when I began painting that I realized how strong that legacy was.  The images of those ornaments and embroideries inspired my pictorial practice.  But it was in my textile pieces with the use of the inherited fabrics themselves that a very intimate connection with my Italian heritage happened. Not only because of the images or the quality of these fabrics but mainly because of their value as witnesses of life and time.  The recognition of the value of this domestic material as a carrier of cultural and emotional information is definitely part of the meaning of my work.

Your pictorial and textile works are rich in images, ornaments, quotations and colors, have a strong visual impact and offer different points of observation. What is the significance and role of decoration, ornament in general in all your work? Where does this aesthetic, dense with references, originate?

I consider that what really plays a main role in my work is ornament, more than decoration. Ornament is a   visual language that is related to natural rhythms and cycles.  The Greek word “kosmos” embraces “universe”, “order” and “ornament”.  In a way that ornament is a force that gathers and transforms elements in conflict and creates a perspective of a world at large. I am also interested in the condition of dependence, the ornament is always linked to something, it manifests interdependence, the ornament needs a holder.  As I was explaining before, interdependence is part of my visual research.

Regarding the origin of my dense aesthetic, I think it is the result of the nature of my process and how I make the pieces. It´s a complex process. I can relate it to a natural movement and the way that things grow in nature.

Is the process of creating a work an instinctive thing for you or is it more the result of a precise project?

I see the process of creating as a dialogue. There is a lot of it that remains unknown to me, but at the same time each step is precise. Not because I have a previous idea about how things are going to develop, but because I´m giving my full attention to the process itself.

Can you tell us about La Toma, an installation shown in the 2018 exhibition curated by Chiachio and Giannone at Galería Pasaje in Buenos Aires? What is the genesis of this work and what themes do you explore through it?

The installation is kind of a scene where vegetation is taking control over a house, and even if there is no real movement you can perceive or infer that this growing will continue. What is central is the absence, it is because of this absence that the natural world invades this space.  I was exploring the notion of permeability linking the natural world and domesticity.  From a human perspective, It´s an experience of something that is out of control.   From a different perspective there is also a reference to rhythms and cycles, in particular, the cycle of life and death.

When I began working in La Toma I was doing a research about branches and roots, in particular observing how they interacted with borders and limits (like fences in the street). I took a lot of photos, I did paintings and drawings.  I was also doing some hand- embroidered pieces on carpets.  I had two old armchairs at home, and I began working on them.  It was a one-year work. I did everything by myself using only my hands, I embroidered the armchairs and the curtains and I created a lot of black roots using hand wrapping techniques, and then I worked on the carpet, with some painting and cutouts. For the installation I wanted to include a teapot, two cups and a lot of old books, many of them I got from my parent’s house.   When Chiachio and Giannone invited me to be a part of “Tarea”, the exhibition in Galeria Pasaje 17, they wanted the installation to be in the front, so that the installation could also be seen trough the window by the people walking down the street. As if strangers could have a glimpse of a home that was out of control.

What kind of relationship between painting and embroidery, do you explore through the works in the Embroidery series? Were these works in some way a starting point for later developing your textile work

I see the Embroidery series (2010) as one of the first explicit explorations of a hybridization of painting and textile that I further developed.  That series included a group of large paintings where I worked with some organic images that were integrated with a kind of pictorial embroidery.   There was another key moment in that exploration that was in the making of a series called Pinturas con pliegues (2018-2020) when I took some paintings out of their frame and I began cutting and folding them as if they were textiles.

What projects are you working on at the moment?

I´m finishing a large scale piece in which I ´ve been working on for many months and also developing an installation.