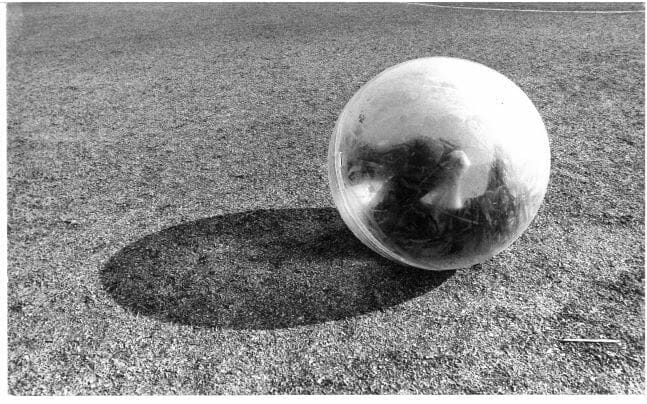 The Tel Aviv Center for Contemporary Art hosts a solo exhibition by Marion Baruch, the first dedicated to the artist by an institution in Israel. Eclectic and original, Baruch’s work spans over seventy years and represents an approach to formalism that is unique and deeply interdisciplinary.

In the mid-sixties, Baruch moved from painting to three-dimensional works, appropriating elements of fashion, graphics, industrial design and commercial practices and practically anticipating the emergence of installation art and Relational Aesthetics.

A “global artist” with an ante litteram “participatory practice”, Baruch lived and worked in Romania, Israel, where she had her first solo show at Studio Micra in Tel Aviv, France and Italy. She has created works that, if on the one hand express her position of total autonomy from any stylistic restrictions, on the other have the ability to act as a radar, capturing ideas and tools, such as the Internet, which will become very influential.

Rooted from the beginning in contamination, Marion Baruch’s artistic practice has undergone various stylistic transformations: from expressive painting to graphic art; from large metal sculptures to her performative and vital works: Container-Environment (1970) and Dress-Container (1970); from her layered work Ultramobile, a group of “non-objects” designed by artists such as Man Ray, Meret Oppenheim, Roberto Matta and Allen Jones, to the “Rembrandt” series (1978-82).”Rembrandt”, in addition to developing her artistic ruminations on the foundations of a culture that puts the West at the center, on the mass media and on the history of male-oriented art, is also an analysis, semiological and at the time same ironic, of painting as a medium.

The 80s saw Baruch’s artistic research orientate itself on a critical but also playful approach towards the art world and in particular the art market, substantiated in the decision to channel her artistic action through a campaign called “Name Diffusion” , registered with the Chamber of Commerce.  In the following fifteen years, the “Parisian phase” is characterized by the clear desire to use the medium of installation, Internet Art and language to address social and political issues. During this phase, Name Diffusion develops and becomes a collective denomination to indicate works created with the involvement of the community of “sans-papiers” (illegal immigrants) with whom Baruch clearly identifies.

The most recent phase of Baruch’s practice is characterized by the reuse of textile waste from the prêt-à-porter industry, with which she creates a body of works that reaffirm her belief that formalism is never divorced from conceptual and autobiographical problems, existential and philosophical. Two examples of this body of work are presented for the first time for this occasion: Passage Paysage and Cloud Architecture (both from 2021).

Bomba (2022), a work created specifically for this exhibition, opens a new phase in her work. It consists of an unprecedented monochromatic composition of “flaps” of  fabric, clothes that once belonged to the artist. The presence of this new path attests to the artist’s perseverance in reinventing her own medium, using a visual lexicon that is all her own and at the same time undeniably universal.

Marion Baruch, born in 1929 in Timisoara, Romania, lives and works in Gallarate. She graduated from the Bezalel Academy of Arts and Design in Jerusalem and the Academy of Fine Arts in Rome. Baruch has exhibited in solo and group exhibitions at important European artistic institutions such as the Lucerne Art Museum, the Mamco in Geneva, the Magasin in Grenoble, the Palais de Tokyo in Paris, the National Gallery of Modern Art in Rome, the Mambo in Bologna, the Groninger Museum, Kunsthalle Friart in Freiburg, KW Institute for Contemporary Art in Berlin and the Maga in Gallarate.