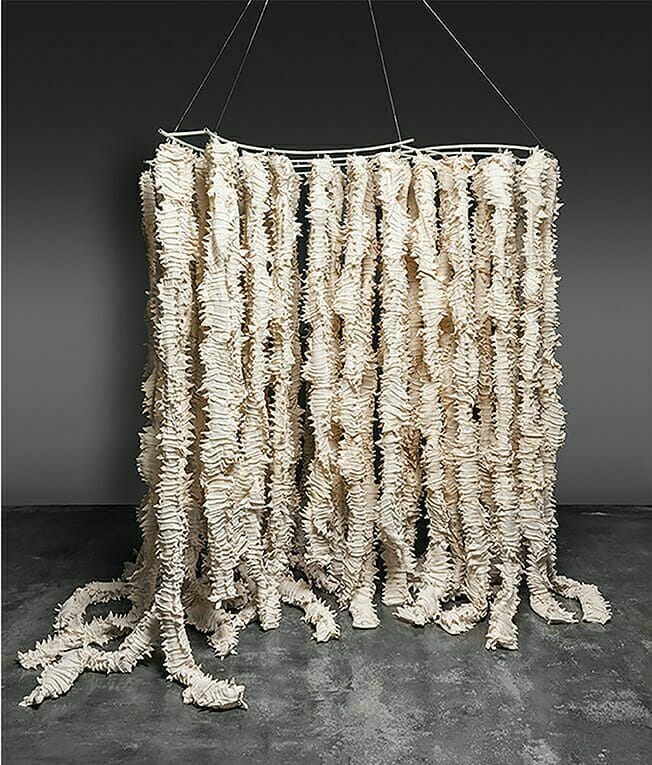 Miriam Medrez was born in México City in 1958. After studying Art and Graphic Design at Concordia University in Montreal, Canada, in 1979, she earned a degree in Plastic Arts at the National School of Plastic Arts of the National Autonomous University of Mexico (ENAP-UNAM). Essential to her training as a sculptor are the courses taught by Gerda Gruber; she was able to pass on to her students the technical skills of clay manipulation and encourage them to think of the material as a sculptural artistic language, thus freeing ceramics from depending on the two-dimensional image and traditional painting.

Through ceramics, after all, Medrez learns the ancestral chemical process of the earth acquiring form and consistency, as textiles would later teach her their inherent analogy with the human skin and the value of the sense of touch.

Since 1985 she has lived in Monterrey, Nuevo León, where she has developed her work as a sculptor and artist. In 1995, the MARCO Museum in Monterrey hosted her solo exhibition ‘Assault of Memories’ (1995) – a unique opportunity for a local artist. Then, during a sabbatical year (1997), Medrez moved with her family to Israel, collaborating with Betzalel University and working as an assistant professor in the School of Arts sculpture department.

The female body has been a constant reference in Medrez’s artistic practice since the early 1980s; to the artist’s poetics, it is a container of inner changes taking place through a dialogue with the surrounding environment.

Her research moves within the framework of her own personal experience. She addresses the intimate, existential, and universal aspects of a generation of women who freed themselves from a patriarchal model. A generation that bears on itself those transformations that have opened the door to the possibility of investigating territories, roles, and unexplored identities, thus redefining the feminine outside traditional parameters.

For twenty years, Miriam Medrez’s experimentation has turned towards the textile medium: ‘I find many similarities between ceramics and textile art. They both require hand skills and allow one to ‘feel’ the materials they build-out of the vacuum. Moreover, one through fire and the other through thread, they transform their apparent formless fragility acquiring solidity, form, strength at the end of the process.”

Materials and textile techniques allow her to follow immersive narrative trajectories that evoke ancestral gestures and meanings while at the same time filtering and distilling reflections on contemporary issues through artistic intervention. Mending, suturing, dressing, repairing, wrapping – a vocabulary that enriches and deepens the creative project at the core of her path in which the female figure is both one and multiple, primitive and avant-garde.

“My work,” she says, “always has a female aspect or perspective, with women or objects we are associated with, such as spoons, dresses, chairs and so on. I also participate as a woman when I model clay and cut or fold the fabric. We give birth to children – like all the narratives about gods creating human beings from clay – and we ‘mould’ them – we raise them to grow as individuals. And through textiles, I feel women’s special relationship with clothes, our second skin, and our homes.”

Her works are inspired by the reality that surrounds her. “My works,” she says, “arise from my everyday experience, from quotidian and domestic objects, or from reflections on the world news such as feminist protests or claims. From the exploration of the body and its physiology and the many forms of female stereotyping, as in the installation QUIEN IF A QUIEN (2019), for example. I have made works in collaboration with female poets and writers; I have created a dress sculpture based on one of their texts, a powerful personal experience.”

Last year, Medrez set up NI UNA MENOS (2021), a powerful installation made up of women’s blouses, ripped, torn or damaged, dense with writing and stained with red paint. “A project,” she explains, ” addressing the difficult situation endured by Mexican women, often victims of abuse and murder and with a very high level of impunity for criminals. We, women, feel that our voices are not heard by the authorities. I believe that, more than ever, ‘NOT ONE OF LESS’ should be the result of our activism.”

In 2022 with RESONANCIA ONIRICA, she broadens her research on the body. She presents a multimedia installation composed of thirty fabric ears about the size of a face suspended, appearing and disappearing to the rhythm of an evocative composition full of echoes, subtle notes and vibrations that lead to a sensorial, emotional and meditative experience.

Miriam Medrez’s work has been exhibited in countless national and international exhibitions, in institutional venues and private galleries, gaining prestigious recognition at home and abroad. Participations include the Hang Zhou Fiber Arts Triennial (2019), Contextile2014 in Portugal, where she won the Acquisition Prize, and World of Threads Festival, Ontario, Canada, among others. In addition, her works are included in the permanent public collections of the UDLAP Art Collection in Puebla, the MARCO Museum in Monterrey, Casa Candina in San Juan, Puerto Rico, the Museo Keramik Grimeerhaus, Denmark and the Jingdezhen Ceramic Cultural Center in China, to name a few.