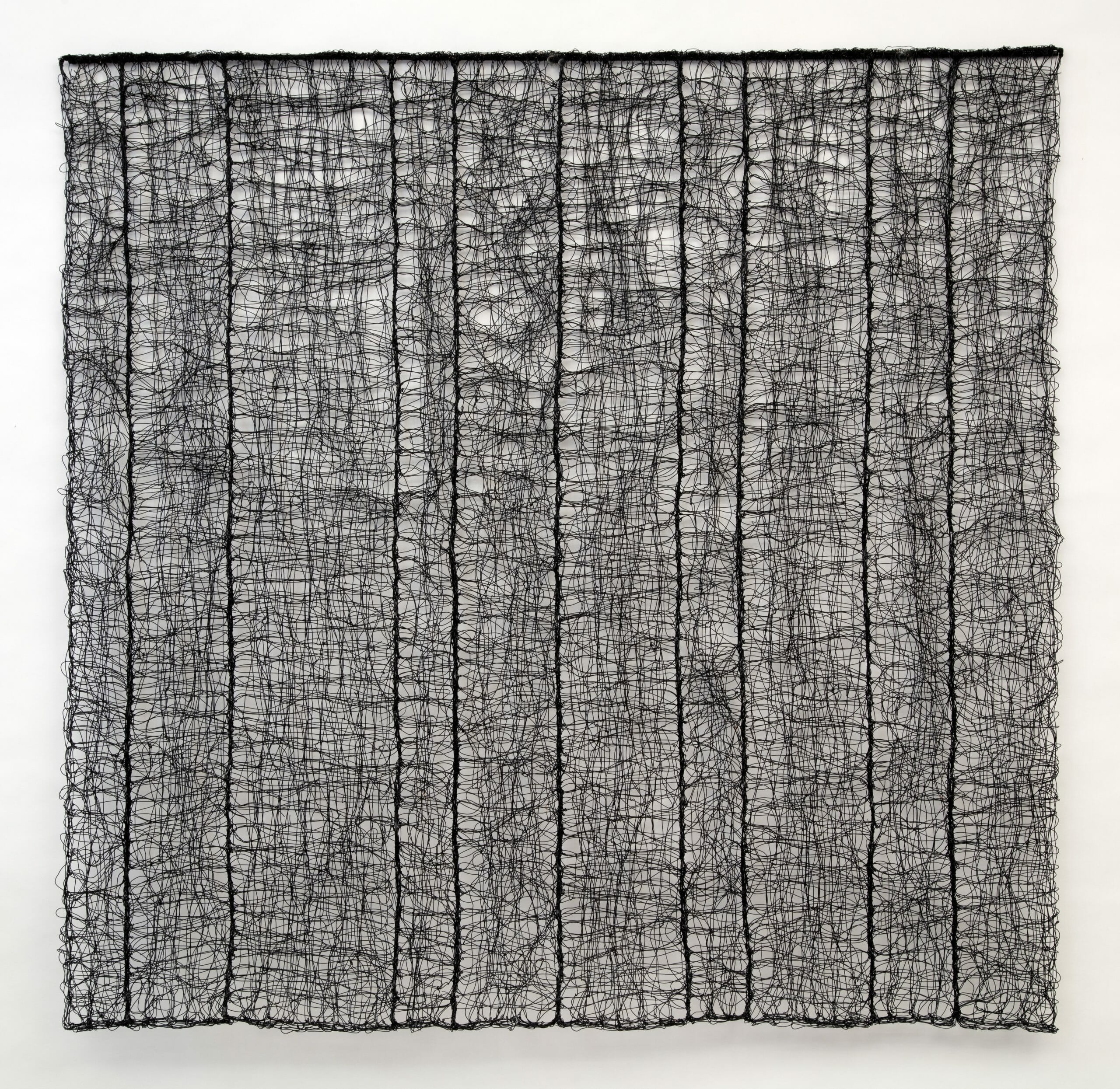 Nancy Koenigsberg’s is an artist living and working in New York; she uses sculpture and installation as the main expressive mediums in her practice. Complex fabrics, dynamic tangles of light, shadows and transparency are created with woven, knotted or crocheted metal wires.

Industrial materials, like copper and steel, are used by the artist in forms and structures that often remind of the softness of cloth, creating works that could appear as fragile and delicate, in contrast to the solidity of the material they are made out of.

Koenigsberg’s sculptures appear as complex explorations of space inspired by urban geometries, the grids of New York streets, and the repeated facades of the city’s buildings. These elements belong to the artist’s DNA; fascinated by the line’s expressive potential, she draws and creates outlines, volumes and stratified shapes.

Her works have been widely exhibited on an international level. They are now part of important public and private collections, including the Houston Museum of Fine Arts, the Cleveland Museum, the Museum of Arts and Design, the New York and Racine Art Museum and the Textile Museum in Washington.

Koenigsberg is the founder and Chairman Emeritus of the Textile Study Group of New York, a well-known association committed to studying and disseminating fibre art and promoting the work of its members, among whom are mostly artists but also historians, curators and teachers.

How did you approach art? What was your path, how and when did you come into contact with the textile medium?

I don’t know that I approached art. Paintings and drawings and made objects were simply part of my world, like stones and trees and the night sky. As a child, I loved to draw. I don’t recall when I started to draw any more than when I started to speak. As a very little girl—perhaps 6 or 7—I learned to knit and crochet. I suppose that was when I started working in the textile medium, though I’m sure I didn’t think of it as “work” or “art”. I was just knitting and crocheting- but when I was drawing and knitting and crocheting my awareness of time and space was altered, and I felt true.

I continued to knit, crochet, draw, and to paint. Before college, I took a sculpture course at a local art school, and this was my first introduction to working in 3 dimensions. I loved it. In college, I studied art history, and took courses in drawing and painting. (Courses in sculpture were not available.)

I learned to needlepoint but was quickly disappointed in the available designs, so I started designing my own needlepoint canvasses. Friends saw my designs and asked me to create needlepoint canvasses for them to complete. Requests from friends of those friends followed and I was suddenly in the business—an enterprise that grew and prospered for a decade. I had some wonderful clients, but the work itself was artistically unfulfilling. I decided to tie off that thread and change direction.

In 1974, I enrolled in a textile course at the New School in New York City. I had the great good fortune of studying for two years with Gayle Wimmer, a brilliant fiber artist. Her own wonderful work incorporated a wide range of materials—gauze, goat hair, old newspapers— woven together to create complex structures. Our classes met on Thursday nights at Gayle’s pristine studio. She was an inspiring teacher and helped open my eyes to a world of “off loom” possibilities that changed the trajectory of my work and my life.

The use of textile materials has been an important part of your work. Today you have switched to the use of industrial materials such as copper wire but worked with typical textile techniques. Can you tell us the reason for this choice?

Traditional textile materials—cotton, wool, linen, silk—are diverse. Each has a unique combination of physical properties: plasticity, elasticity, thickness, softness. Textile artists and artisans have always selected materials that best served their vision. The availability of new materials offered new properties that made possible new forms. In my case, I wanted to make open, three-dimensional pieces. Traditional fibers didn’t provide the structural stability the work required, so I used new textile materials, such as copper wire. These materials gave me the structural stability and pliability needed to knot and twist and weave the copper wire. In that sense, copper wire is just another fiber on a continuum offering new possibilities. The relationship between new materials and the new forms they make possible is not confined to textiles.

In 1977, you were one of the founders of the Textile Study Group of New York. What did this project consist of at the beginning and what developments has it had today?

The Textile Study Group of New York started with the end of my courses with Gayle Wimmer at the New School. As I mentioned, her studio was pristine—and all white— so “refreshments” were limited to water. By 9 pm on Thursday evenings, when class ended, we were all famished. So, several of us started to have dinner together. In 1976, Gayle left New York for a tenure-track position at the University of Arizona. We were devastated that our courses with Gayle were ending. She told us: “you’ve done enough studying for now; go to your studios and work.” Almost offhandedly she added “and get together with each other to talk about your work.”

We did. We met on a Thursday night once a month. At first it was five of us. Soon, we were more than 10, so we started mailing meeting notices on hand-written post cards. And we established membership dues— $5 a month, cash—to cover postage. For a long time, we met in my apartment, I think because I had a large living room.

At some point, we decided that our meetings would eventually get boring if we only talked to each other, so we started to invite speakers. It was a lot of work but proved to be a great decision. Over the years, we’ve had some of the most accomplished textile artists in the world as well as museum directors, curators, and historians such as Mildred Constantine, Gerhardt Knodel, Bisa Butler, Sheila Hicks, Jack Larsen, Helena Hernmarck, Jacob Hashimoto, Chunghie Lee, Michael James, and Janis Jefferies.

We’ve had a number of well-received shows of our members’ work, and we continue to enjoy each-others’ good company. Membership has continued to grow over the years. We are now incorporated as a not-for-profit called the Textile Study Group of New York with more than 200 members.

Kyoto Stones. Can you tell us a little bit about this work?

A wonderful artist and good friend, Nancy Bess, organized a trip to Japan. I’d travelled all over Europe, but never to Asia. So, of course, I signed up. We spent a week in Kyoto, Japan. It was magical, and beautiful in ways I hadn’t experienced before. When I made Kyoto Stones, I wasn’t thinking about Kyoto, or anyplace else. Like so much of my work, the piece determined its own form as it evolved. It was only after it was completed that it triggered sense memories of my trip to Japan, and it then became Kyoto Stones.

How has you work changed over time?

Each work informs the next, reveals new possibilities and gives me ideas for new work—often before it is finished. When I started working in copper wire, I was creating open structures made possible by the strength and shape-holding properties of the wire. Over time,

I’ve increasingly been engaged by the possibility to use wire in forms that drape and have the soft “hand” of more traditional textiles. My nets are examples of that exploration.

The woven grid is an element that characterizes most of your work. What does it represent?

I always have loved and have an ongoing dialog with grids. Needlepoint is all done on a grid. So is weaving on a loom. When I use wire, my grids are often regular and geometric but, at the same time, none of the lines are straight and the intersections are mostly knotted. It is that duality, and the fact that all of the work—even the most rigid pieces—move.

Often in your works you incorporate objects such as paper, stones, glass beads (in works such as Secrets, City Nights…). What is their role and meaning?

The inclusions—paper, stones, glass beads—do not have an independent meaning. They are an integral part of the piece, incorporated to enhance the sense I am trying to convey. Sometimes they add light, sometimes they interrupt, like a broken rhyme in an otherwise too predictable poem.

Is there a work or project to which you feel particularly attached or that has played a significant role in your personal and/or professional path?

Yes. Thirteen Nets. This was the work that marked my transition from using copper wire for its structural strength to exploring its possibilities for properties —lightness, translucency, movement, even softness — usually associated with the traditional, diaphanous textiles. In the summer of 1988, I attended a conference called “Knots and Nets” organized and led by Joanne Segal Brandford, textile scholar and artist. She is the maker of extraordinary, knotted works. You could say “the seed was planted” or “the knot was tied” during that incredible weekend. Although I admit it did take a while for me to see the possibilities of those techniques when used with copper wire.

Your works appear as an exploration of the expressive and evocative potential of the line, which creates contours, volumes, shapes that give life to a language that reaches the essence of things. Do you find yourself in this statement?

Looking back, it has always been about line. From my earliest memories of knitting, crocheting, drawing, needlepoint and working with fiber. I’ve been lucky, in my life and in my work: the lines, though rarely straight and rarely planned, can be very beautiful if you let them.

What is the source of your inspiration today?

I live in New York City, near the river. I am inspired by what I see. Buildings and shimmering water and the night sky—always there, yet always moving and changing.

What are you working on at the moment?

I am working on a piece for my granddaughter, Emily, revisiting the layered, draped, metal nets with an emphasis on their cloth-like qualities. I am also working on paper collage and printmaking using woven wire to make the impressions. And about 10 more ideas that will have to wait for another time.