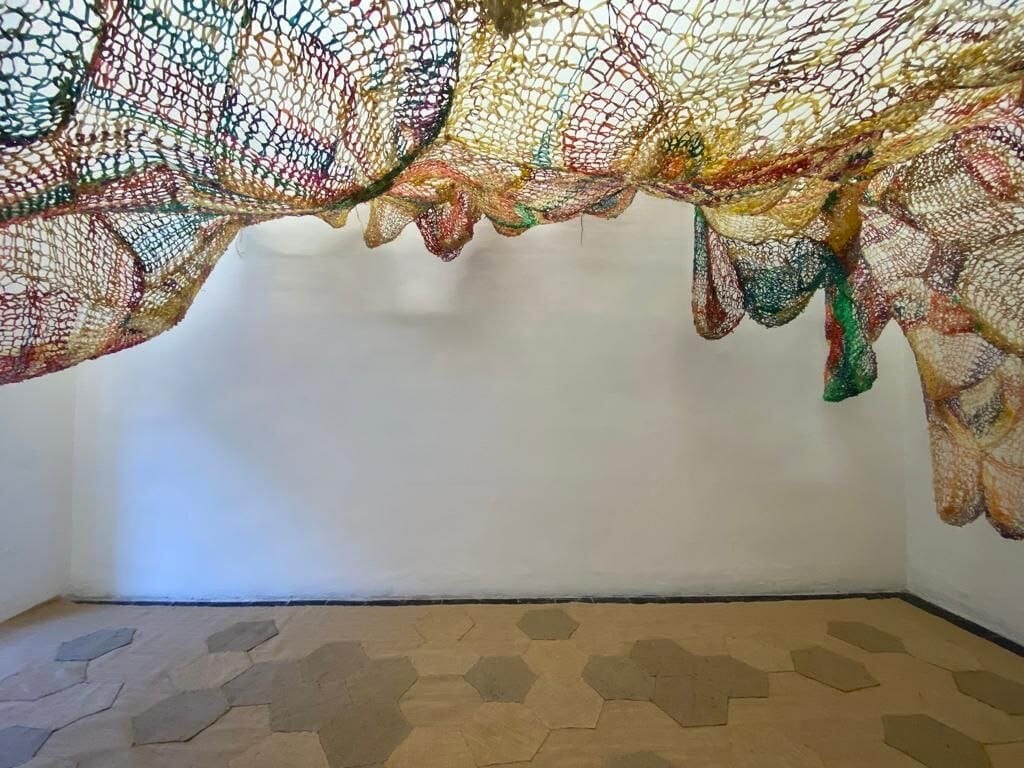 From Wednesday, February 9, 2022, Quartz Studio is pleased to present The Earth Sounds, the second solo show in Turin by Paola Anziché (Milan, Italy, 1975) with a critical text by Hortense Pisano.

“We are in the epoch of simultaneity, of the near and the far, of the side-by-side, of the dispersed”. According to Michel Foucault, we instead experience the current epoch of space as a “network that connects points”. In his 1967 lecture, the French philosopher made a fascinating distinction between utopias and heterotopias. He defined utopias on the one hand as sites with no real place and heterotopias on the other hand as places that are absolutely different from all the sites that they reflect. He cited the garden, for example, as one of the oldest heterotopias and stated that the traditional gardens of the Persians had very deep and seemingly superimposed meanings. “The garden is a rug onto which the whole world comes to enact its symbolic perfection, and the rug is a sort of garden that can move across space”, so Foucault. [1]

Paola Anziché sewed a “rug hive” out of jute fabric. Spread out over the floor of Quartz, each familiar hexagonal form adjoins the next and forms an abstract, golden floor pattern. The natural fiber “jute” is often called a “golden fiber”. We are often completely unaware of exactly how many jute products shape our everyday experiences. Unprocessed, the material may initially seem unremarkable, but it now even features as a fashionable highlight. Over the centuries it has served quite functionally in the production of rugs, ropes, and sacks – the latter for the transport of wares. Thus, jute material is associated with a long history of knowledge exchange, of goods transport, and a global trading network, starting from the distant sites of production, moving to the processing sites, and finally to the places where those wares are distributed. Paola Anziché reveres the special quality of this natural fiber. She has already given striking expression to its soft, yet robust materiality in an earlier series of works entitled Yurts (2010/2011). A feeling of closeness and distance, of strange intimacy and unfamiliarity is evoked by her Yurt works. This may be the result of the familiar techniques of weaving and sewing that Anziché has learned, which immediately make you want to pick up these tactile objects and hold them in your hand. These works are reminiscent of oversized everyday objects, some even of extraordinary ritual, cultic objects. While the Yurts series vividly reflects the cultural embeddedness of the material, its forms, and associated techniques, in Anziché’s current space installation at Quartz, we now become part of the action. The exhibition The Earth Sounds confronts the viewers with themselves, with their individual perception and conduct in the art space and in the exterior space. So, for example, even as we enter the exhibition, we are invited to set foot on the artwork itself, on the aforementioned rug hive. It may well be that we visitors are already unwittingly standing on the artwork. For, so says the artist herself, “the first sensation that the viewer will have is that of the smell”. She refers to the scent of beeswax that is dispersed from a net extended across the ceiling and woven from colorful strips of wool and natural beeswax. Not unlike her space installation Natural Fibers (2016), the viewer’s gaze is directed away from the exhibition wall and up towards the ceiling. In order to get closer to the work, we visitors must bide a while on the rug, which functions as a kind of projection surface – we must lay back and luxuriate on it, to dream and allow our imagination to play. “The juxtaposition of the colors in soft textures is reminiscent of a flowering meadow in spring,” according to the artist. The loosely woven net of merging colors and abstract forms hangs from the ceiling like a kind of kaleidoscopic arc. Anziché’s ceiling element conveys an almost primitive vision of nature – note: not a rigidly structured garden landscape. In this space-in-a-space-installation, all of the viewer’s five senses are appealed to. The Earth Sounds is an invitation to the viewer to dive in and luxuriate, to reflect deeply upon the relationship between art and nature.

It is tempting to link Anziché’s current installation with Foucault’s description cited at the start of this text, to say that this other space is presented as a net of linked points. Or, as Foucault himself said: “We do not live in a kind of void, inside of which we could place individuals and things”.