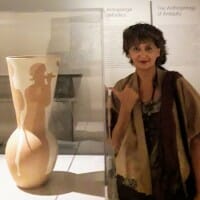 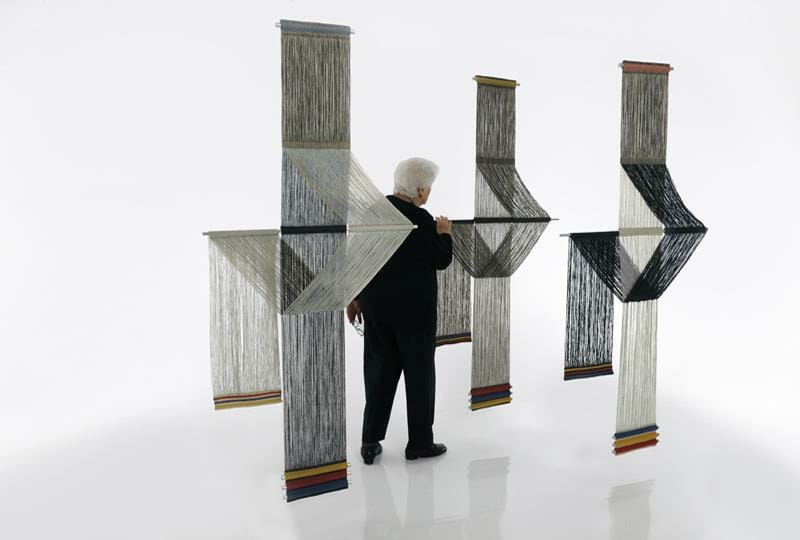 This is how Paola’s memory was, and this is how ours must be in remembering her: a memory capable of planning, gathering and preserving, and providing new inspiration for future generations.

I have chosen seven keywords to read, under a new perspective, the different aspects of her versatile but never eclectic artistic adventure.

The word ‘art’ did not exist in the Greek language. However, the word TECHNE’ did exist, meaning first and foremost, regardless of the fields of expertise, the ability to make things knowing a set of rules that neither inspiration nor imagination could replace.

This term seems adequate to me to define the singular and methodical approach to her artistic career, which we can summarise in two ways. Firstly, her desire to weave within the structure’s dictated rules: any change or transgressions always started from an “acceptance” of the technical framework. This attitude led her to find, especially in Central and South America, small and medium-sized looms still in use but derived from ancient pre-Columbian societies, an awareness of a material culture that silently collects and preserves symbols, languages and aesthetics as varied as ever.

She stated: “I firmly believe in the ‘what-ifs’ and the ‘what-else’ both in weaving and in life, and it is exactly what all the peoples of the world demonstrate in their ways of working.”

Her approach to history was not only philological but poietic, transformative. In this regard, I want to mention the work “reticoli Chancay” I exhibited, using the datasheet she compiled to explain how technique, historical/anthropological knowledge and creativity came together in a brilliant synthesis in the 2012 edition of Muse Diffuse in Champorcher, Gressoney s.j. and Courmayeur.

Indeed, the culture of the 1960s extended great curiosity to all areas. Dario Fo, for example, used to listen with ‘new ears’ to folk songs dissonances, which were transferred into the sounds of the avant-garde. For Besana as well, creative influences were varied and unpredictable. I remember her wandering through her collection, a repository of materials for creation in which books and sensations coexist. She was surprised by the number of ideas that came from it, defining them as textile stimuli and pointing out that it was not a question of transforming them into “…textile sensations, but of giving birth to new textile sensations, utterly autonomous from whatever generated them. In fact, Agnes Martin’s paintings remind me of specific small sample motifs by Anni Albers; Dorazio makes me think of large thread structures that I may make one day, and Sonia Delaunay small silk print patterns have already a relief and a weaving structure for me. And what about the painted architecture of Yemen, the weaving of baskets and Jazz music? For a weaver, everything becomes textile structure, and for a cook, it becomes perhaps a flavour?”

In her rigorous, technically accurate and conscious approach, there would seem to be no room left for subjectivity, yet, with modesty and lightness, Paola allowed her experiences and affections to enter the work. Her comments show the relationship between abstract forms and feelings in a balance that we could define as classical.

“…. With a material as beautiful as an opalescent strapping band, with flexibility properties similar to those of palm leaf, we can express our joy, our impulses and perhaps even experience disappointments, when ‘the gods are no longer favourable to us’ and we discover that for functional reasons the strap is now produced wrinkled and opaque.”

Paola’s passion for collecting also has something of Renaissance about it, in terms of its extent, quality and method. Among books, fabrics and looms, we can reconstruct her cognitive adventure. She wrote: “My collections have developed over the years along three interconnected threads: research into textile structures, historical-geographical interest (I would almost say anthropological) and my affections. The latter is linked to textile gifts and also to the frequent exchange of postcards with textile subjects”. This last category of emotional and material souvenirs is very peculiar. Bruno Besana, who oversees the organisation and “museumification” of all these precious materials, explains: ” For my mother, collections of textile and non-textile objects were an essential part of her world. Among the many things she collected, there were postcards: a simple and magical object, which allows composing a series of thematically heterogeneous images (faces, readers, cooking, hands, animals and looms.). Inspired by this passion, the Polytechnic young students created postcards of her objects. Then they positioned them, re-photographed them, thus creating the most appropriate landscape: Paola’s universe, her home studio”.

Notti a Palazzo, 2016. On display at the exhibition I saw a king. Alcantara and 9 artists interpret the Prince’s Apartment, Palazzo Reale, Milan. 400 x 400 cm Alcantara® and steel. Manual printing and weaving

After staying in Sweden and Finland in the 1960s, she travelled to the United States. In New York, she studied with Lily Blumenau, the first artist to graduate from the New York School of Textile Technology and the first to provide a technical and conceptual approach to textile art. In Washington, in the 1960s, at the Textile Museum, she met Irene Emery. The latter was engaged in publishing her monumental “The primary structure of Fabric”, a work that provided Besana with the method for classifying her private collection.

Her determination to share and pass on her knowledge stemmed from contagious energy. She was well aware that her wisdom had to be expressed in simple but not superficial language, together with a progressive method to support the acquisition of complex techniques in a clear manner.
Her commitment should not be taken for granted since the question of whether it is possible to teach art in our times is a subject that is debated both inside and outside the academies, oscillating between the confinement of craftsmanship and its revaluation. Her approach is in the phenomenological trend centred on the active role of each subject in the cultural sphere and the historicity of values and symbols. Above all, she is aware of the democratic process initiated by Dewey when, in the 1930s, he proposed a methodology for research and action in shared working environments. Paola grew up with her pupils, who are now able to carry on her teaching and preserve her valuable materials to move forward within the framework of a logical working method.

The collection, the library, the students: a valuable legacy that her son, Bruno and her friends want to preserve in its integrity and make it accessible to the general public. The library has already been reopened for public use. The hope is that greater attention will be paid to Paola Besana as a bearer of artistic values she always embraced and shared in the most diverse fields, from social activities to design. Famous works have been created with Paola Bonfante and Lalla Ranza for Fiat, La Scala, Costa cruise ships, and the fashion industry, with collections of bags exported to Japan and the USA.

Currently, under Prof. Beppe Finessi guidance, four students of Interior and Spatial Design at the Milan Polytechnic have carried out an impressive study of Paola Besana’s work as their degree thesis. They examined her works, design and teaching, her collections, and the items’ location in her studio apartment (which is presented as a Wunderkammer), thus highlighting the relationship between art, craftsmanship, and the cultural context.

I would like to add a personal memory linked to a public meeting in Courmayeur during which she still expressed her passion by pointing out new paths for the culture of textile heritage and its preservation. I hope that friends and institutions will follow in the footsteps she laid out. Thank you Paola!

Simple heddle comb loom on which the reticle was woven

Detail of the reticle

“I have always been fascinated by the infinite variety of textile structures in pre-Columbian Peru. Chancay reticulated textiles cover a relatively short period from the 11th to the 12th century AD. In these funerary textiles, a net, formed by pairs of warp threads spaced apart and bound by a double weft, served as a background for embroidered motifs. I constantly analysed the characteristics of each textile structure to explore new interpretations. In the case of the Chancay net, the knotted and spaced double wefts, which do not glide and create open spaces, allow not only embroidery decoration but also the introduction, in areas, of a foreign body. I, therefore, thought of a partially dyed hemp webbing. “Sis” for the Brazilwood dye and “cat” for the indigo refer to the names of my friends Sissi and Caterina, whom I asked to do the dyeing.

Paola Besana, world-famous weaver, designer and textile artist, and a scholar of textile structures and ethnic looms, the protagonist of a unique path between art and craft, died in Milan on the eve of her 86th birthday. She was active until the end, cultivating new projects such as a major exhibition in Seville.

Born in Breno (Brescia) on 26 June 1935, Paola Besana began weaving in 1958, at the age of 23, after a long trip to Sweden and Finland. In 1961-1962 she studied in New York with Lily Blumenau, then in Maine, and at the California College of Arts and Crafts with Trude Guermonprez.

Back in Italy, in 1968, she opened the Paola Besana Weaving Studio in Milan, which was a workshop and a centre for research, production and teaching. In the mid-1970s she was joined by Paola Bonfante and Lalla Ranza. Together they designed Alcantara fabrics for Fiat. They made costumes for Richard Wagner’s “Parsifal” at La Scala, 680 multiple of variable tapestries for the Costa Classica cruise ship cabins, large tapestries for the Costa Romantica lounges, and bag collections for the USA, Japan and Italy.

Since 1997 she continued working alone, reducing her commercial production and intensifying her studio practice, research and artistic production. She has also made study trips throughout Europe, Syria, USA, Mexico, Guatemala, Colombia, Peru and Bolivia. Her collection is vast; in her library, she has collected and catalogued over 2000 volumes on the art of textiles.

TEXTILES INSTALATIVOS – DEL MEDIO AL LUGAR at the Centro Andaluz de Arte Contemporàneo, Seville, from 26 November 2021 to 15 May 2022.
Several large-scale pieces are on display, spanning almost four decades of Paola Besana’s work.
On 2 November 2021, Paola Besana’s name was inscribed in the Famedio of Milan’s Monumental Cemetery. Here are honoured people from Milan, by birth or adoption, that have contributed to making Milan a unique place for social, scientific, cultural or artistic merits.
Under Bruno Besana guidance, the rearrangement project is curated by Prof. Beppe Finessi, along with four students from the Interior and Spatial Design course at Milan Polytechnic.
The library, consisting of 2,000 titles, can be consulted by appointment by writing to biblioteca@paolabesana.it