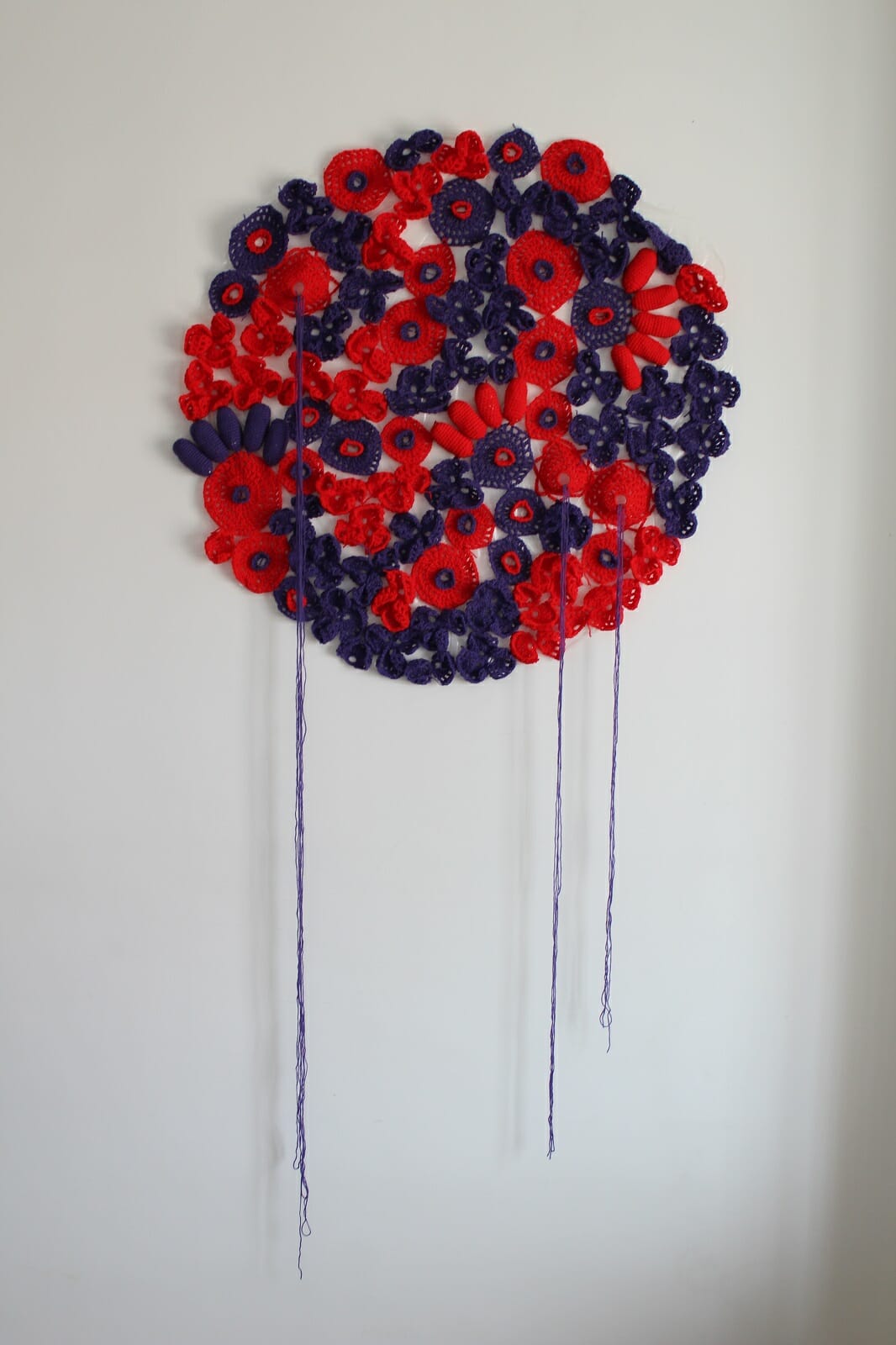 SCD Studio opens on Saturday February 19, 2022, 5 pm, in the spaces of via Bramante 22N in Perugia, the #PENELOPE exhibition, curated by Margaret Sgarra, with works by Alice Biondin, Grazia Inserillo and Francesca Rossello.

The exhibition metaphorically weaves a thread between tradition and contemporaneity: the artists have created the works through the use of fibers by applying different techniques, materials, languages ​​but in a shared perspective that reinvent and reinterprets the textile practice no longer as a traditional, functional activity and artisanal but as an art medium.

The reflections that emerge from their research focus on current changes and urgent contemporary issues, in particular on the condition of women, the definition of identity and the protection of the environment.

Alice Biondin investigates the inevitable physical changes in women during the period of pregnancy when the body becomes a home, the womb welcomes a life and adapts to it. The artist amplifies the metamorphosis of physical forms and exasperates their features. The body dimension also returns in the collages belonging to the Bleeding days series where the predominance of red symbolizes the menstrual cycle: a physical condition that still represents a taboo today.The tapestries by Grazia Inserillo address the theme of identity: through the filamentous textures and knots that make up the works, the artist expresses the difficulties of the search for one’s own self, investigating, at the same time, the relationship with her own land. Through the choice of violent colors, Inserillo gives voice to the sufferings generated by the detachment caused by the need to abandon bonds and affections to try to reach better living conditions. Francesca Rossello reflects on the environmental emergency through a work composed of five looms with embroidery on tulle that focuses on the existence of the small beings that populate the natural sphere, in this case of a colony of ants, making visible the small traces of the their passage on our planet, establishing a connection between human beings and social animals. A parallelism between interiority and nature is drawn instead in the work Anima which shows the trunk of a tree in its hidden dimension, the internal one: an almost hypnotic vision with its succession of concentric circles that restores to nature the dignity that is often taken away from it.

Alice Biondin (Gorizia, 1986) graduated from the Academy of Fine Arts in Venice, is a visual artist who mixes different mediums: engraving and collage are some of the techniques used. At the center of her work there are issues related to the female universe investigated under multiple aspects – the broken body, feminism, violence against women. Different colors, materials, words and stories follow one another within the same installations, often of a textile nature, which become a visual story. Among the recent exhibitions Family Portrait as part of Paratissima 2021 and Rendez-Vous, Nora, Turin. She lives and works in Turin.

Grazia Inserillo (Palermo, 1988) graduated in Sculpture from the Academy of Fine Arts in her hometown, she is a textile artist and teacher, she carries out social workshops to raise awareness against violence against women. Her artistic research investigates existence and living through the thread from an anthropological point of view, a material element with which she gives shape to complex installations. Among the recent solo shows The weight of the blanket at the Drago Contemporary Art Gallery in Bagaria and Little World on me at Art Now After Hours in New York.She lives and works in Turin

Francesca Rossello (Pisa, 1992) graduated from the Academy of Fine Arts in Florence. Her artistic research is a material transposition of a dialogue that the artist creates with the natural sphere: trees, insects and ephemeral elements are some of the protagonists of her works. In her work different artistic techniques coexist, at times opposite, such as, for example, sculpture and embroidery. Among the recent exhibitions, THINK GREEN! at the Casa dell’Ambiente in Turin and Art, Design and Impresa Talenti_20 at the Luigi Pecci Center in Prato.She lives in Vecchiano.