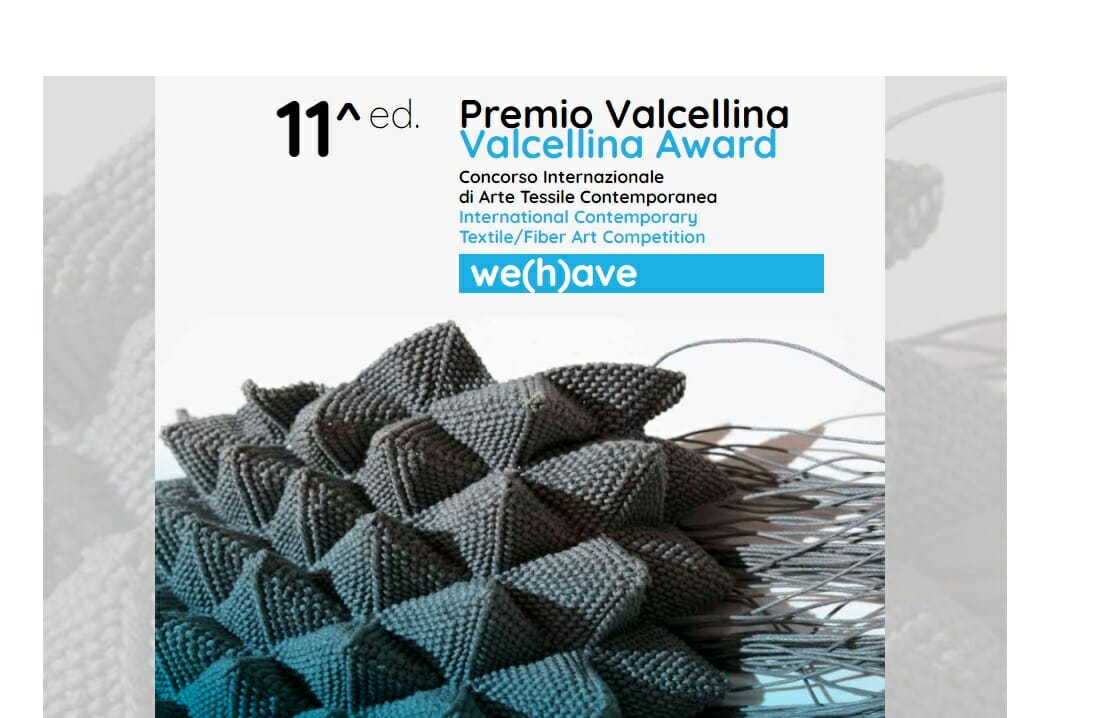 The winners of VALCELLINA AWARD 11th edition are announced: first prize to the young latvian KATRINA LEITENA with the work INEXPRESSIBLE. Presentation of the event extensive catalogue and of the BOOK FIBER ART 20 YEARS OF VALCELLINA AWARD. Award cerimony, finalist works and collateral exhibition available on Youtube. Guided tours of the finalist works on display at the ARTE FABBRILE MUSEUM in Maniago and of the collateral exhibition WEHAVE_THE SOCIAL at LE ARTI TESSILI hedquarters are planned during the summer

The winners of the 11th edition of the Valcellina Award, organized and promoted by the Association Le Arti Tessili APS in Maniago, based on the theme We(h)ave, word game between the verb weave and “we have”, were officially announced Saturday 26th June in a press conference at the former Ex-Tipografia Savio, in Pordenone and the event was streamed online.

The young participating artists were invited to create a work interpreting the present, dialoguing with historical memory to seek innovative visions and, through their own artistic research, to intuit innovative visions to design and offer a cultural and social transformation.

The winning works were presented by the President and responsible for the Valcellina Awards Annamaria Poggioli, Lucia Vedovi vice President and in charge of the set-up, Barbara Girardi coordinator of the Competition together with Ilaria Bomben and Anna Teresa Bruni of the Board of Le Arti Tessili APS.

The Award was contested by 23 finalists selected among 59 young creatives from 18 different countries, as evidence of the wide participation in the Valcellina Award by fiber artists from around the world.

The Latvian Katrina Leitena, born in 1995, won the first prize of this edition with the work “Inexpressible”. The prize includes free attendance to a course at the Academy of Fine Arts in Bologna with a scholarship worth 3,000 euros. The work is a triptych in which the embroidery in black and white, faithfully and in an absolutely realistic way, represents photographically hands and bodies touching each other.

«In Leitena’s work – the jury, composed this year by art historian Eva Comuzzi, the artist Anna Galtarossa, Renata Pompas, journalist, essayist and expert in Fiber Art, Massimo Premuda, curator of many exhibitions between Trieste and Muggia, and Thessy Schoenholzer Nichols, textile artist, textile and Swiss costume historian, declared- refinement of manual execution and originality of the composition stand out. The embroidery is performed with skill and delicacy in tonal passages from white to black that vivify the texture of the epidermis».

The second prize goes to the work Deux Mille-fleurs / Two Thousand Flowers that draws inspiration from the backgrounds of carpets and tapestries of Medieval and Renaissance eras, where the human intervention has been replaced with digital algorithms able to generate infinite variables of symmetrical floral elements returning a new unrealistic vision proposed by the Danish artist Søren Krag Nielsen (1987). The author of the tapestry, which is 6 meters by 1.6 coloured by 2000 flowers, was awarded a prize that includes the free attendance to a course at the Fondazione Arte della Seta Lisio in Florence, worth 2,000 euro

The author of the powerful work and social and environmental denunciation The river my heart seeks by Yu Jung Wu (1992) is from Tawain and won the third prize. The work was made with fabrics tied according to the shibori technique and then immersed in the polluted waters of eight rivers of the city where the author lives. The artist, using a traditional dyeing technique, highlights the devastating aspects of pollution produced by our civilization.The creation is surprising for its ability to represent the disturbing toxic contamination of the planet through a poetic realization. Awarded with the free attendance to a course at the Academy of High Fashion and Costume Koefia in Rome with a scholarship of 1,500 euro.

Among the other prizes awarded, there is also the free attendance of a course at SRISA Santa Reparata International School of Art in Florence, with a scholarship of 1,000 euro awarded to the artist Nikola Filipović (1994, Montenegro) author of the work Le mal du Pays. Instead, the 5th prize, which includes the residency of artist Rad’Art Project at Associazione Arteco’, Mercato Saraceno, FC, with a scholarship of 1,000 euro, was awaerded to the artists Jiying Liu (1995, China), Xu Yingbo (1996, China) and Peng Shaohua (1994, China) authors of the work INTIMO-Intimo, a collective work in which the three artists represent a flag created by sewing together female underpants dyed with natural colours to form a crossbred textile mosaic. While the Italian artists Selene Torlino (1994), Marco Taurino (1995) and Alessandro Rubei (1995), authors of the work Soundweave, characterized by the contamination between electronic programming and the historical aspects of ancient textile activities were awarded with the free attendance of a course at the Textiles Zentrum in Haslach (Austria) with a scholarship of 1,000.00 euro. Finally, the Calimala Prize, which consists of a gift card valued at 250 euro, to be spent on the DHG online shop was assigned to the author of the work Signs of Resistance by the artist Reyhaneh Alikhani (1985, Iran).

During the morning two volumes were also presented: Fiber Art: 20 years of the Valcellina Award and the catalogue of the 11th edition of the Award.

The publication Fiber Art: 20 years of Valcellina Award, its a book of 360 pages that explores the 20 years of the Competition through interventions by distinguished speakers such as Gina Morandini fiber artist and creator of the Valcellina Award, recently passed away, the expert journalist of Fiber Art Renata Pompas, Andrea Bruciati art historian and current director of Villa Adriana and Villa d’Este in Tivoli, with whom Le Arti Tessili has worked for many years, Beatrijs Sterk, International Fiber Art Expert, former President of the ETN Europeean Textile Network, Keiko Kawashima, Director of the Gallery Gallerygallery in Kyoto (Japan), Justin Thompson, internationally renowned artist and lecturer at the SRISA Santa Reparata Shool of Art in Florence, Vanna Romualdi, professor at the Academy of Fine Arts in Bologna, Annamaria Poggioli, Barbara Girardi, Lucia Vedovi and Ilaria Bomben, key figures in the organization of the event and other important personalities who have collaborated in the realization of the Valcellina Award Competition along the years.
The second volume instead, is the catalogue of the 11th edition of the Award, and contains photos and cards of all 23 finalists and the works of the collateral collateral section Wehave_the social.

Some works, about fifteen among those selected, courtesy of the artists, will be visible until 19th September 2021 at the Museo dell’arte Fabbrile e delle Coltellerie in Maniago, PN.

Guided tours to the exhibition of the finalist works at the Museum dell’Arte Fabbrile and the collateral exhibition Weave_Tessere il sociale set up at the gallery of the headquarters in Via Carso 4 in Maniago will be led by art historian Eva Comuzzi on Friday 9th July, Saturday, 21st August, and Sunday, 19th September.

This eleventh edition has been realized with the contribution of Regione Friuli Venezia Giulia, Comune di Maniago and Fondazione Friuli, with the support of Ecomuseo Lis Aganis, BCC Friulovest Banca, Savio Macchine Tessili, Pordenone and Associazione Il Capitello, Pordenone. The event relies on the support and partnership of several institutions including the ETN European Textile Network.