Quilt from record, today we talk about Yo-Yo 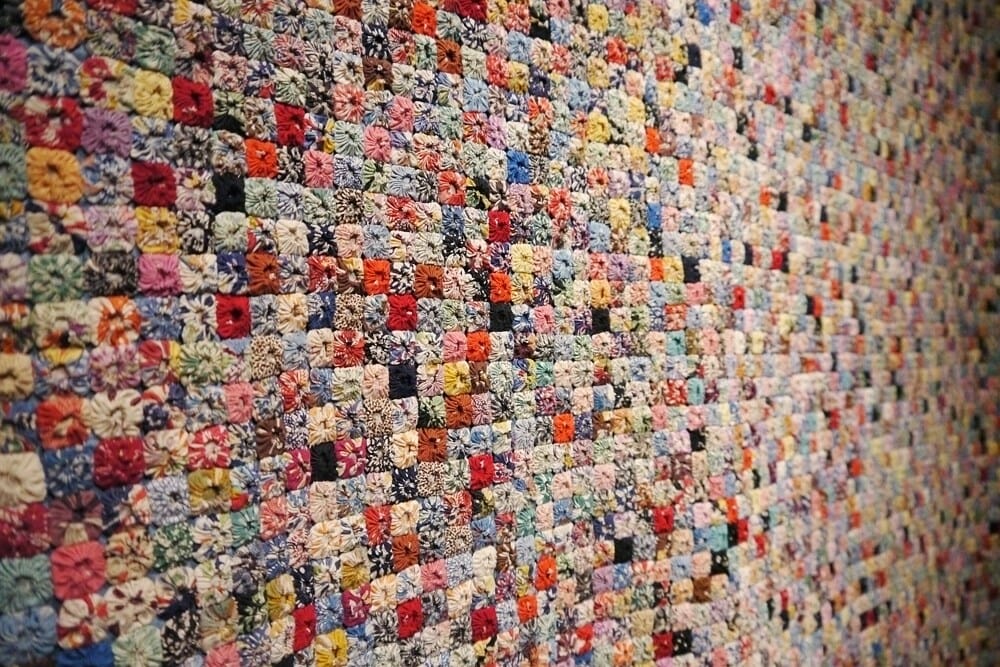 Reworking of an article by Jonathan Holstein, who besides being a historian is also a collector of quilts

The “yo-yo” style / model is inspired in its form to a very widespread toy, which was fairly successful at the beginning of the 20th century, a success that continues today.
The toy, of Chinese invention, takes place in a thick wheel with a groove in half, in which a cord slides, one part is rolled up in the game keyboard and the other is held in the hand, with a finger. Throwing the wheel on the ground, it comes back, and my run is an infinite number of times, as far as children are concerned and not just a hypnotizing one.
Inspired by the yo-yo those very creative ladies of more than a century ago, who practice the quilt, cut small pieces of round cloth, or square, edged them with a tight basting that pulled created a small swollen circle, could look like a ball , this is the flattened fledgling ball, so it became flat, with the narrow curl in the center that is well stopped with the needle. Finally, as regards the sides, the other is a small void on the four sides, which can be wider or narrower.
This is one of the many inventive approaches of American quilters, those that have enriched the traditional heritage of infinities, discovering new construction techniques, trying to modernize, always in step with the times.

With the yo-yo model, a home-made quilt was made, such as blankets, tablecloths or panels to hang on the walls to create a touch of color.
An incentive to use this technique was my first plan for reusing leftovers, that poor cotton that piled up at the bottom of the drawers. There are many individual pieces, they do not take up much, they have the advantage of being able to be worked on during a trip to a meeting with friends.

The Quilt of which I speak is composed of 14.000 years ago and is now part of a private collection. The author is unknown, she claims only that it was made in Illinois between 1930-40. All the pieces have been sewn on the four sides and then fixed on the lining, there is no padding or quilt, but only a thin external finishing bond. Who knows if the author was asked the idea, the design of a drawing? We will never know, he left no mark, at the origin or at the end of his work.

It really deserves the “Guinness Book of Records”.

The vision of the final result was of extraordinary complexity. The number of pieces was already amazing. Among these there were some that stood out because they were made of identical materials and colors. The author, however, inserted them so that they were not too close, unconsciously I had created an extraordinary mosaic, myriads of stars and galaxies, microscopic particles: a surface that was both lively and stable, compact. It suggests the future and Jackson Pollock and abstract expressionism.

This work has been a sequel over time, because the “yo-yo” style has been much imitated and has spread everywhere with interesting variations; as an example, in the field of record-breaking quilt, it can be used as a quilt with the stamps of the National Postal Service, even these thousands of pieces. But this is another story, more patriotic than domestic.

The yo-yo technique paved the way for the creation of geometric figures that had a different thickness than the traditional one, which was flat: compare large circles, squares, hexagons that were widespread in the late Victorian period and then inspired the current application of three-dimensional figure decorating the surface of the quilts.

If you search online you will find designers and decorators who still continue to prepare tapestries or blankets with yo-yos, a style that has its future, is in fact still very popular.