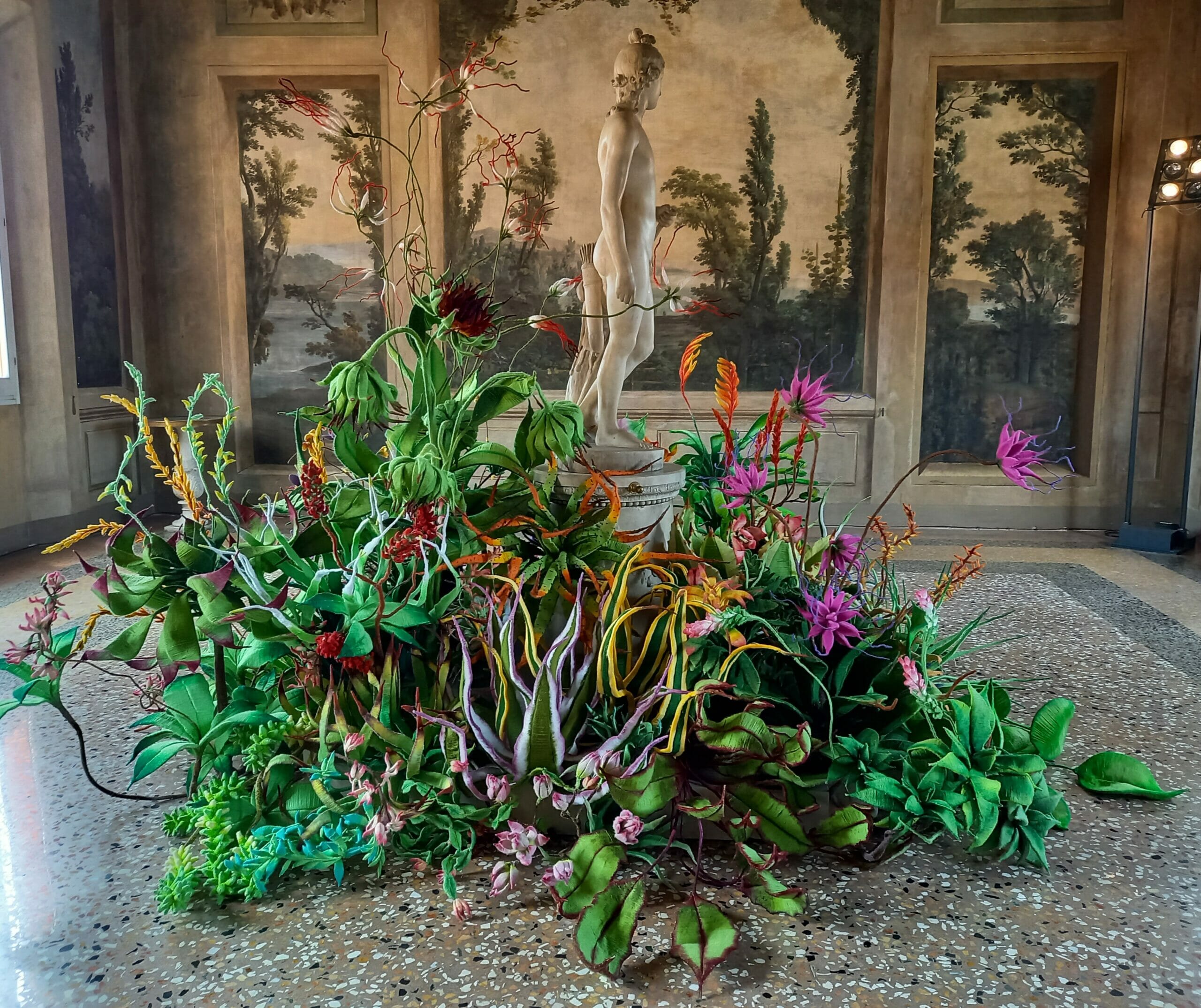 “In this new appointment of the project Heritage, resources for public space, tools for contemporary artistic design, which connects the places of the territory with languages of the students of the Biennium of Decoration for Architecture of the Academy of Fine Arts of Bologna, the participating artists investigated the stories, relationships and atmospheres of a historical space using that gaze that art knows how to return by creating a path made up of “areas of exchange, dynamism and permeability “. With a visual / sound itinerary capable of communicating with the works of the Municipal Art Collections and the Farnese Chapel, the path unfolds in four rooms in which each artist, putting himself in resonance with the place, returns his own testimony linked to the historical space lived and to the works preserved in it, generating memories and interactions in the visitor. […]

In the Boschereccia Room, Hybrids, the site-specific intervention by Elham M. Aghili and Khorshid Pouyan introduces us to a multisensory environment in which the suggestive sound carpet of Pouyan, detected in the Botanical Garden of Bologna with an instrument capable of translating the vibrations of plants, joins an immersive textile weave that gives the observer an imaginary future between the wild and the domesticated, inhabited by a new generation of plants. The work, inspired by the ancient Orto dei Semplici, which once occupied the space of the current Sala Borsa Library, overlooked by some windows of the Boschereccia, symbolically leads us to a precious natural heritage, the archive of Ulisse Aldrovandi. A sensory bridge between wall paintings and environmental  intervention is re-established in the room, immersing the visitor in a rich botanical collection where visionary configurations analytically redefine a new hybrid nomenclature that alludes to an evolving nature, as in a continuous “metamorphosis of plants” (J.W. Goethe), which gives voice to its secrets. Both daughters of a thousand-year-old Persian culture, the two artists, one raised among the colourful carpets in her father’s shop and the other among the traditional Persian instruments practiced during her previous musical training which here interacts with the sound depictions of the Botanical Garden, come together to remind us that Bologna still knows how to preserve precious archives of memory.” (Vanna Romualdi, Professor, Decoration for the Architecture (MA), Academy of Fine Arts in Bologna)

Khorshid Pouyan (Ahvaz – Iran, 1988), lives and works in Bologna. After a first degree in Music at the University of Tehran (Iran), in 2019 she graduated in Decoration, Art and Environment (BA) at the Academy of Fine Arts in Bologna, where she is currently a student of Decoration for the Architecture (MA). Among her recent exhibitions: Stratificazioni in 2019 and La decorazione tra storia, natura e poesia in 2018, at the Zucchelli Foundation in Bologna. In 2019 she was selected for the Engraving award Giorgio Morandi and exhibited at the Salone degli Incamminati, Pinacoteca Nazionale di Bologna. She is currently in residence at Lucy+Jorge Studio Orta in Paris, for an internship.