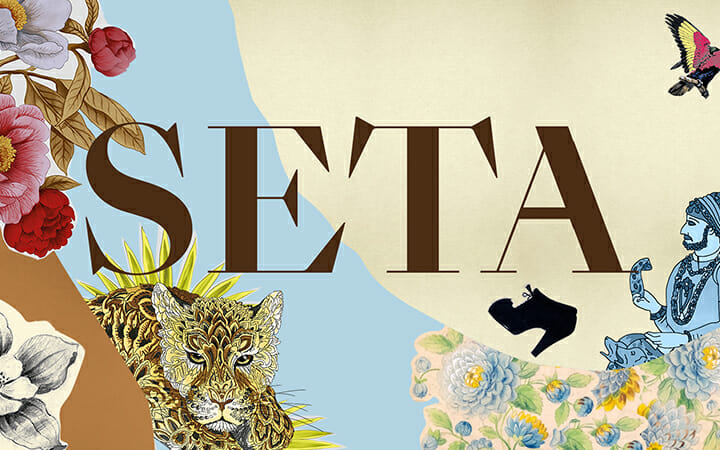 Promoted and organized by the Ferragamo Foundation, Florence Salvatore Ferragamo Museum, Florence
In collaboration with the National Central Library of Florence
With the patronage of the Ministry for Cultural Heritage and Activities and Tourism and the Tuscany Region Municipality of Florence
www.ferragamo.com/museo

An exhibition that emphasizes the relation between creative intuitions and high industrial craftsmanship that is the basis for the production of silk scarves. Italy has excelled in the production of fabrics made from this precious yarn since the Middle Ages and in the 1930s Como became a reference point for the creation of those prints that will help make Made in Italy famous all over the world. The neckerchief in the carré format (square, in fact) allows the local industry to experiment both in the printing press and in the creative phase, starting the collaboration with the big established fashion brands.

The Salvatore Ferragamo maison has chosen silk printing as the image of its style. If the Ferragamo name has been linked to footwear since 1960, its founder’s goal has always been to create a fashion house that would dress women from head to toe. In the 70s it was the daughter Fulvia who started the production of silk accessories with exclusive designs and made in Como by Ravasi, Butti and Ostinelli, Ghioldi, Canepa, Ratti and Mantero, silk textures selected according to the printing specialties in which they excelled.

Initially, the scarves were purchased from external companies, with the exception of one from 1961 designed on Ferragamo’s direct commission by the artist Alvaro Monnini and produced by Ravasi. The subject is inspired by an eighteenth-century engraving by Giuseppe Zocchi depicting Piazza Santa Trinità, where however Palazzo Spini Feroni, headquarters of the Ferragamo company, is made of wooden shoe shapes and all the elements of the design (birds, horses, carriages, etc.) are replaced by elements that refer to footwear; a unique product likely intended for promotional purposes.

In the early 1970s, Fulvia developed the idea that it was time to produce this accessory on her own, with personalized and recognizable designs, working in direct contact with industries specializing in silk printing. At first, the designers of the printing companies were used, but within two years contract designers and internal figures within the company started engaging in the process. The result is an eclectic creative world inhabited by flowers, exotic animals, collages, hunting scenes and the inevitable footwear now preserved in the company’s historical archive, a documentary treasure that allows the company to continue designing and producing in the wake of her passion and of her ideas even after her untimely death in 2018.

The star of the first room is the installation by two contemporary Chinese artists Sun Yuan & Peng Yu – Were creatures born celestial? (2021, in collaboration with Galleria Continua) – which brings together some animal sculptures and taxidermies from Naturaliter, Capannoli (PI) and the Museum of Natural History (La Specola) in Florence, one of the most prestigious zoological collections in the world. Here the walls are covered with wallpaper that reproduces a map of the ancient route where the places are marked by figures, buildings or animals taken from the prints created by Fulvia Ferragamo. For this exhibition, the artists also created a design for a silk scarf.

Fulvia Ferragamo’s passion for silk and oriental decorative motifs dates back to the years in which she attended the boarding school of the SS. Annunziata in the Villa del Poggio Imperiale in Florence; here the students’ dormitories were housed in the so-called “Chinese quarter”, a place that testified to the passion for China in Europe in the eighteenth century when, in 1765, the Grand Duke Pietro Leopoldo di Lorena and his wife Maria Luisa arrived in Florence, chose the villa as a summer residence.

There are many sources of inspiration for the subjects printed on scarves and ties: from the works of art preserved in museums to the ancient volumes of botany and natural sciences which were carried on in drawings and collages in the silk department of Ferragamo in Milan, the starting point of the collections, and gathered in 1065 “red albums” whose use inspired designers and silk producers since the 1970s.

For this exhibition, the various references in the albums were monitored, combining them with the scarves produced, discovering, for example, that a samurai astride a scarf reproduces an armor identical to that at the Stibbert Museum in Florence, or that the poppies on one of the prints from the nineties are the reproduction of an engraved table of one of the most beautiful botanical books of 1613, Basilius Besler’s Hortus Eystettensis. Many floral themes, then, take inspiration from the works of the Medici painter Bartolomeo Bimbi today preserved in the Museum of Still Life in Poggio a Caiano.

And for the magnificent birds the references go to centuries of iconographic tradition of editorial masterpieces but also from the most popular contemporary magazines as well as from The Birds of America by John James Audubon, the most beautiful ornithology book in the world, printed in London between 1827 and 1838, in four monumental volumes with 435 plates engraved with aquatint and colored by hand and depicting 1065 species in their real size.

The formal key of Fulvia Ferragamo’s first scarves – and for about twenty years – was in the use of flowers and leaves with which she built decorative patchwork and collages in a creative mix that Albertina Porro of the Como printing house working for Ferragamo suggests was inspired by the animated movies of great Eastern directors that were broadcast by RAI between 1970 and 1971. In the nineties, floral themes then became the protagonists of many prints, inspired by the art, naturalistic and book collections of Florence

The short film, the work of the two young directors Rocco Gurrieri and Irene Montini, draws inspiration from the scarves of Fulvia Ferragamo and from the animated films of the Czechoslovakian director Jiří Trnka, with his puppets made from patchwork of flowers.

Sophisticated connoisseur of scientific and artistic iconography, Fulvia draws, for the extraordinary animalier production of her scarves, from ancient volumes, from works of art and engravings, as from photographs taken in her travels or from reports that appeared in specialized magazines no less than from observation from life.

Art Media Studio has created a multimedia installation that stages the graphics of five students of the Art School of Porta Romana and Sesto Fiorentino (Florence), coordinated by their teachers.

At the end of the eighties, a new shoe theme was introduced into the production of scarves and ties. The first foulard with this theme is Shoes, a true sample of the most famous historical footwear, followed by Toes, Notice Board, Poster where the advertising posters by Lucio Venna for Salvatore Ferragamo from 1930 are inserted as decorative motifs. The micro-designs of the ties are instead inspired by the uppers of the most famous shoe models, such as Sfera and Stella, a reinterpretation of the Tavarnelle lace embroidery of some 1930s décolleté, or Scacco, which incorporates the decoration on the wooden wedge of a sandal from the 1943.

At the time when Fulvia Ferragamo created the first scarves in 1971, this accessory was already famous and indispensable complement of elegance, thanks to iconic figures such as Audrey Hepburn, Brigitte Bardot, Jacqueline Kennedy and Grace Kelly. The immediate success of his prints leads the Florentine maison to decline all-over designs on silk and thus with the prints of the scarves created by Fulvia the stylists who have collaborated with them since the late seventies have created evening dresses, sarongs, twin-sets, etc. A world of silk that is narrated here as in the scenes of a theatrical piece, reproducing poses and settings from each decade.