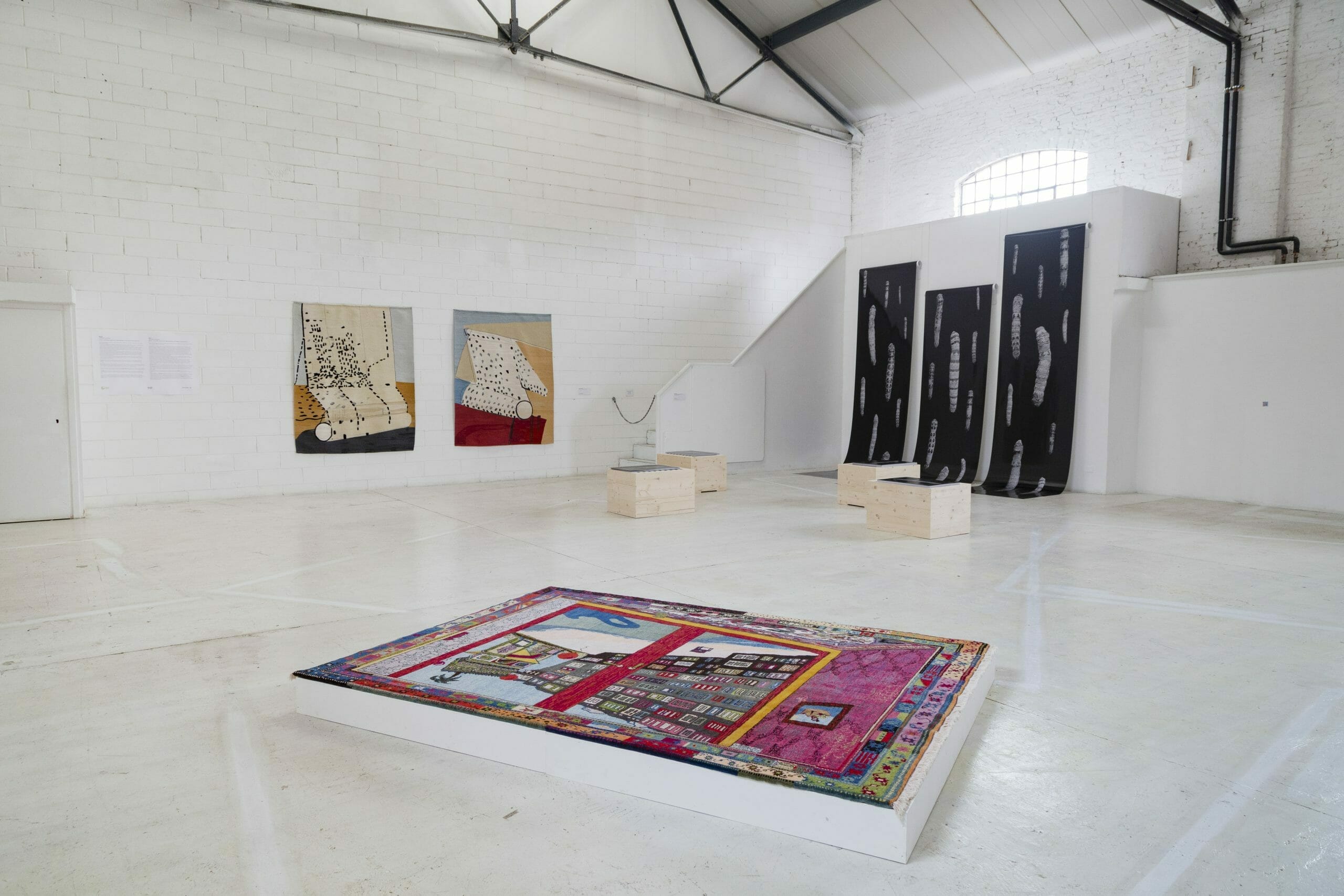 “Kublai Khan does not necessarily believe everything Marco Polo says when he describes the cities visited on his expeditions, but the emperor of the Tartars does continue listening to the young Venetian with greater attention and curiosity than he shows any other messenger or explorer of his. In the lives of emperors there is a moment which follows pride in the boundless extension of the territories we have conquered, and the melancholy and relief of knowing we shall soon give up any thought of knowing and understanding them ”

Goethe-Institut and Giudecca Art District are pleased to present the exhibition of art and textile, SILK, curated by Alfons Hug with artists from the Caucasus region, Italy and Germany.

More than 10.000 years ago goats and sheep were first domesticated in the Caucasus and Mesopotamia ushering in a sophisticated tradition of carpet making and textile art as well as laying the foundations for human settlement, culture and civilization.

Textile art continues to be very important until today in many countries of the region between the Caspian and the Mediterranean Seas. For centuries, women in the Middle East, Central Asia, the Balkan countries and the Caucasus have passed on the tradition and art to their children. The intricate designs and materials used in carpets make it an elaborate art. Silk-printing was a very important product of manufacture in the Caucasus region, of which the silk factory and especially the silk museum in Tbilisi as well as the Carpet Museum in Baku serve as testimonies.

In textiles the history of trade and industry has resonated since ancient times, and fabrics reflect the ever changing conditions of global production. At the same time they give insight into social practice. But they are also an aesthetic realm with their own poetic potential.

The artists of our exhibition have learned how to strike a spark of poetry from these sources and to decipher the secret index of the past, enabling us to sense a breath of the air that surrounded people in former days. It is almost as though there were a secret appointment between the old Masters and the artists of today, a weak messianic force echoing down the centuries.

At the same time the project revisits the western part of the old Silkroad which started in China and ended in Venice. The project also serves as a cultural corrective to the massive Chinese “Belt and Road”-Initiative with its strictly economic and geopolitical objectives.

Our exhibition approaches the Silkroad as a poetic resonance chamber and positive myth where ideas, technologies and artifacts are exchanged and “traded”, rather than merely merchandise.

The high prestige that is generally attributed to contemporary art will positively affect and enrich the artisans’ production. This is especially true when the works are shown during the Venice Biennale which is considered the most important exhibition on a global level. Art in such a context is capable of heightening awareness for the artisan industry and enhancing its opportunities.

Venice is an iconic city not only for the silk road but also for the century old trade and cultural exchange with the Islamic world, in particular the Ottoman empire. The dock behind the Biennale is called “Darsena” from Arabic “dar-as-sina” or House of Industry which later became “Arsenale”, one of the venues for the Biennale. So in addition to arts and crafts the “Western Silkroad” project is situated at the crossroads of great civilizations. Rather than insisting on contemporary conflicts and frictions, for example between Armenia and Azerbaijan, the exhibition invites the public to reflect on common heritage and artistic excellence.

It is also a unique opportunity to showcase artists from all three Caucasian nations in productive dialogue with artists from Germany and Italy. We expect the show to travel to all 3 countries after Venice.

Faig Ahmed is well known for his conceptual works that transform traditional decorative craft and the visual language of carpets into contemporary sculptural works. His art reimagines ancient crafts and creates new visual boundaries by deconstructing traditions and stereotypes.

Nino Kvrivishvili produced two handwoven tapestries that tell the story of their making in the now defunct Soviet textile industry. Numerous studies for these tapestries were created and later transformed into woven pieces. The titles of the simple, abstract weavings AISI and DAISI (Sunrise/Sunset in Georgian) reference the names of the fabrics produced by the Soviet era Georgian silk industry.

Based on the principle of fragmented tapestry, puzzles or patchwork, Araks Sahakyan’s drawings made with markers on paper are made up of dozens of A4 format free sheets on which the artist has brought together snippets of her personal memory, punctuated by multiple trips.

“I wish you were a mulberry tree leaf and me a silkworm” is the Georgian poet’s quote that Olaf Nicolai prints on posters that depict silkworms. The artist has done extensive research in the iconic Silk Museum of Tiflis which is a huge archive of old photographs, objects and handicraft. The museum’s general state of disrepair serves as an ideal study for contemporary art for which the ruin has always been a privileged realm.

In the two tapestries handmade by Lisa Batacchi from the project “Sand Storms in Medio Mundi”, a melancholic vein prevails in reference to the ancient mysticism that arose along the Silk Road as if waiting for a new predominant ideology that can start a subsequent human cycle on earth, thus facing the current ideology of progress understood as an insatiable machine of available energy.