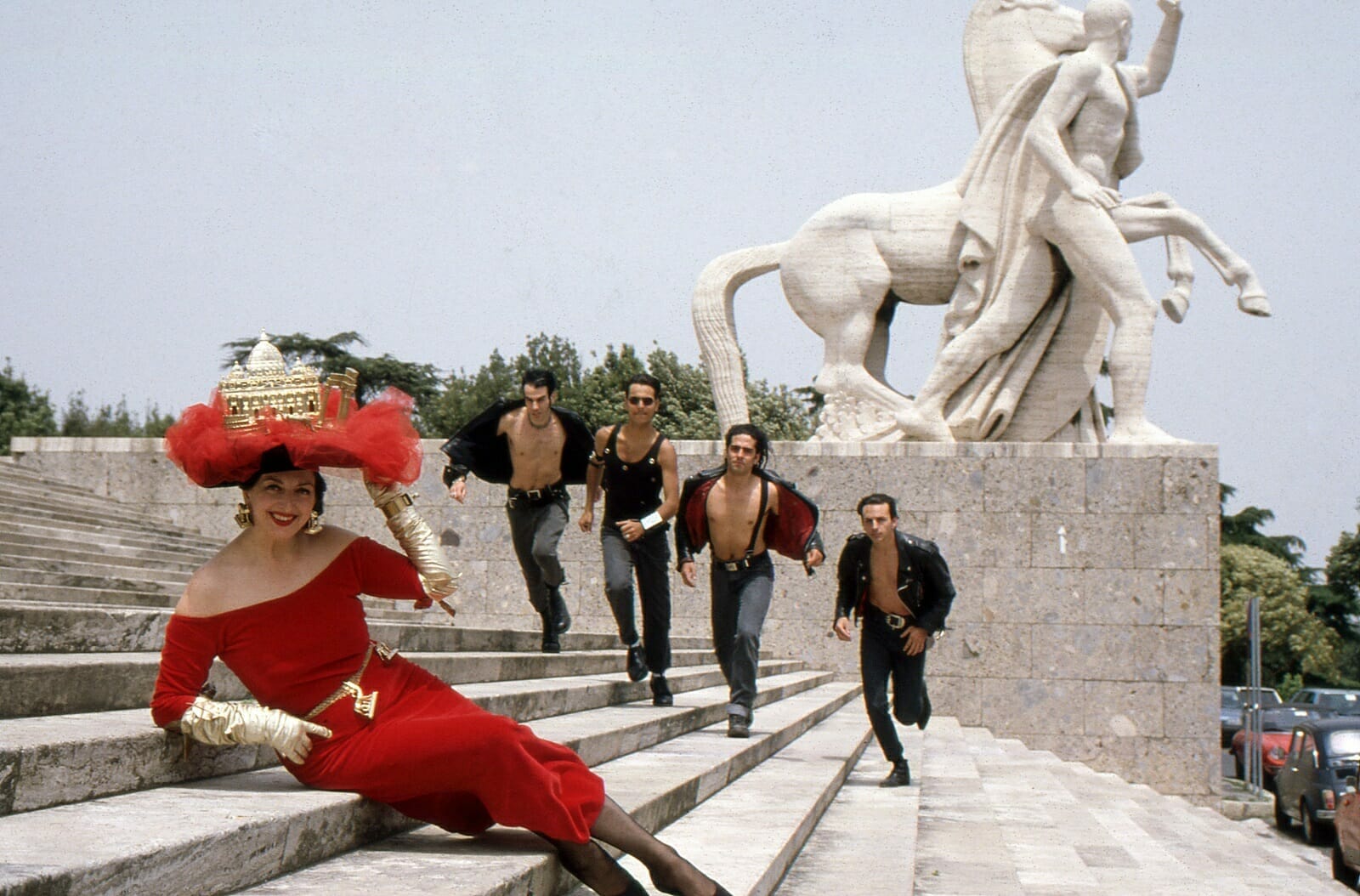 The door of Silva Bruschini’s home-studio opens on a smile that awaits me beyond the threshold. Raven hair with a disheveled cut, a very red lipstick and two eyes highlighted by blue eyeshadow: even if I didn’t know her, I couldn’t doubt that it was none other than her.  She receives me in a space of accumulated and stratified ideas that her hands have given shape to, a space – or what remains of it – full of costumes, hats, accessories, clothes and books – many, many – scripts, catalogs, volumes that have informed her research and practice over the years but also testimonies and documentation of the many successes collected in her long career.

Silva was born in Rieti, a couple of years after the end of the war, in a simple family – she says – but enlightened, I add. It was her father who noticed her artistic talent early on, but it was the whole family who supported and encouraged her move to Rome to first attend the Art School in Via Ripetta and then the Academy of Fine Arts. It was a courageous step for a small provincial girl of the first generation of women born with the right to vote. But anyway, her talent was her destiny: character and determination did the rest. At the Academy she studied and graduated in Painting and Engraving with masters of the caliber of Guttuso.  And in the meantime, she frequented the magical atmosphere of the capital of the 60s, participated in the cultural and artistic ferment but also, in the evenings, in the ballrooms and in the places of the Dolce Vita frequented by stars, producers and international stylists where she began to create – a little out of necessity and a little for overflowing creativity – accessories and clothes that she designs, sews and wears, becoming herself the first model and testimonial of her work.

Experimentation is the key to all her artistic practice: since the early 70s she uses alternative, waste and reuse materials for her creations – an ante litteram upcycling that transforms Christmas decorations into fashion accessories, spare parts for cars in sculpture-hats in which excess also has an assertive value.

It is then, in fact, that the silent hands of the women who had created fashion up to the first half of the century finally begin to emerge from anonymity and who, overcoming the dimension of simple performers, now could  and wanted to develop their own ideas and own the fruit of one’s talent.

From these beginnings, Bruschini built a career as a stylist and creator of accessories and, for a long time, was also active as a designer of fashion fabrics at the Charlie Farkas studio.

In a solid balance between the rigor of professionalism and the lightness of the game, she has often worn her own creations at fashion shows and performances in Italy and abroad – in New York, Vienna, Paris, Rome.

Her eclectic nature has led her to work in various fields. For the theater, for example, with countless collaborations that will accompany her entire career, fueled by a passion for costumes that combines a vast historical knowledge with an innovative vision. In 1982 she is in Paris where she makes costumes for a play that will participate in the Linz Festival and, over time, will work for shows staged at the Teatro Argentina in Rome, at the PalaFenice in Venice, in Orvieto, Latina, Narni. In 1996 it was the time of the masks for G. Verdi’s Ernani at the Bilbao Opera House (Spain) followed by lorgnettes and masks for Gounò’s “Romeo and Juliet” for the Bonn Opera House and showing also  at the J. F. Kennedy in Washington and at the Nice Opera House (France). Her hats, hairstyles, accessories will also be at the XXXIV International Festival of musical operetta in Trieste in “The Duchess of Chicago” directed by Marco Carniti.

But additionally she creates costumes and accessories on several occasions for television sets. In RAI Italian Radio Television she made her debut with Renzo Arbore’s Quelli della notte and over the years she has collaborated and participated in several broadcasts (Paperissima, Uno morning, Domenica in, Dancing with the stars, among others)

At the same time, she was an advertising designer for large companies (from Buffetti to Air France, just to cite an example) with forays into the world of animation as an artistic collaborator for Peynet’s French cartoon film “Around the world of lovers Valentino and Valentina “and others.

But it is in the creation of hats and fashion accessories that Silva Bruschini has expressed all her talent. With collections for Raniero Gattinoni, Fendi, Lancetti, Giovanni Torlonia, Egon Fürstenberg, Raphael Salato, Gianluca Gabrielli, Miss Sixty, Alviero Martini, Sergio Valente, for many years her creations have paraded on international catwalks. In 2011 at AltaModa Rome at the Auditorium Parco della Musica she participated with her own performance.

It is all this, and much more, that she tells me in more than three hours of chat. A gushing of episodes, anecdotes, memories. Some amusing, others veiled by the melancholy that always accompanies absences. I ask her to summarize her career in one word, but it’s not really possible.From that patrimony of experiences, every now and then masquerade balls emerge between decayed nobles and upstart on the Roman scene, but also many nights bent over the sewing machine pressed by delivery deadlines during her apprenticeship, she tells me, was really long, and so, so tiring.  She tells me about the tears of fatigue in the final rush of 350 accessories for an opera and, with pride, of the room that the Automobile and Fashion Museum of Malaga (Spain) has dedicated to her works. We leaf through a huge book together, page after page we travel from Paris to Rome and then to New York through hands peeking out of flamenco-inspired headdresses and models wearing gardening rakes.

How are your creations born? It is essential – she explains – to find a balance point between the creative and the client, it is necessary to understand – sometimes imagine – who will wear what. This is why she prefers hats and accessories, because freer from the strict canons of fit and size, they leave more room for imagination, the possibility of an infinite number of combinations of elements to be worn.

She would do it all again, she tells me. Regrets? None. Her hats published in specialized magazines and publications, they are the proven proof of her success. It was really a long journey full of emotions for a girl who left a small provincial town in times when for too many the prospect did not go beyond the family and a safe and not too ambitious job.