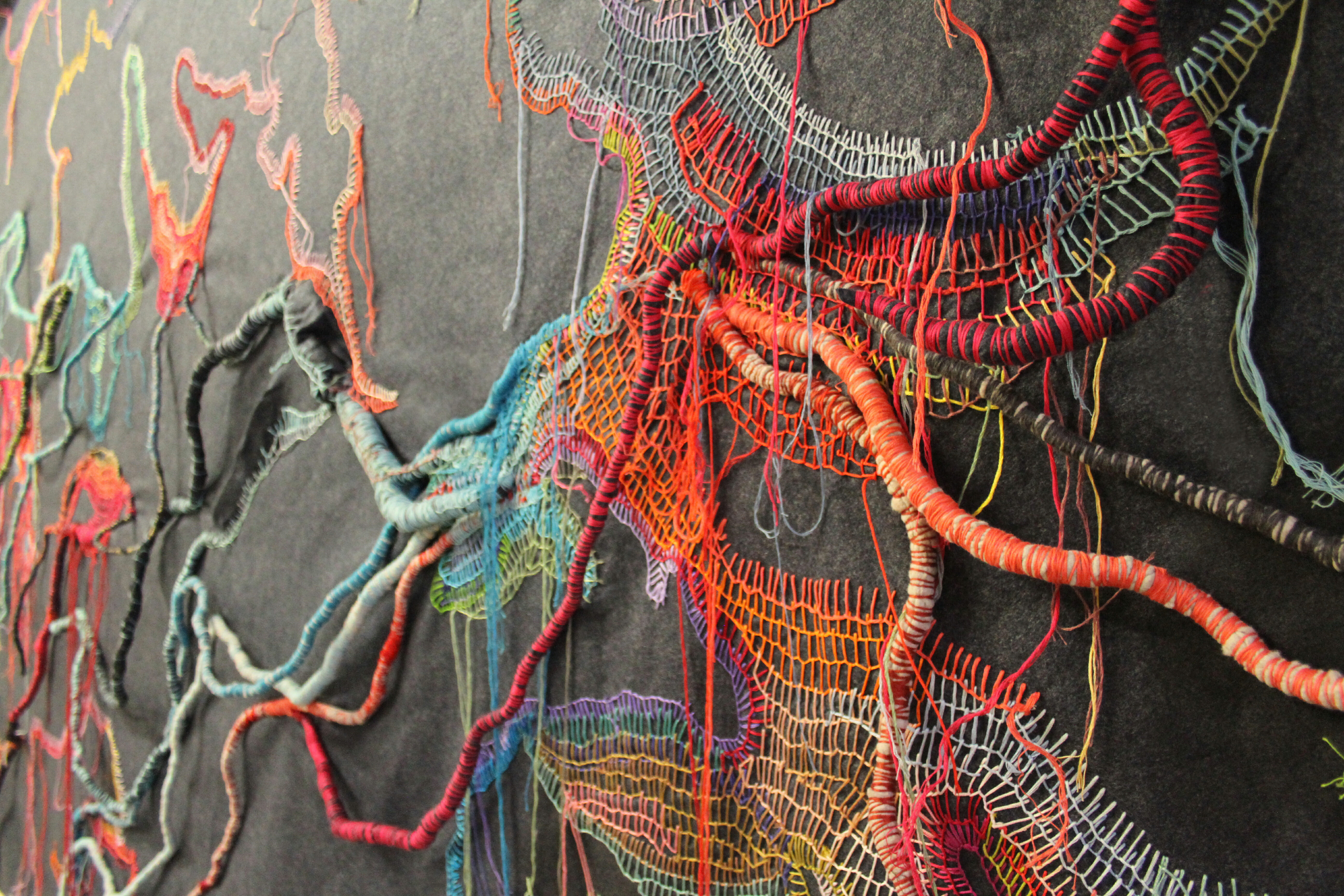 Nobody wants that, as in the Nietzschean prophecy, “nothing has happened”. In truth, even if the humanitywould disappear tomorrow, no one can denythat «nothing has happened”. Man has been, from eternity, and with his presence even fugitive, with regard to the eternities of the universe: continents drifting, natural and human landscapes seen, painted, drawn, photographed, mapped, individual and collective passions, wars and peace, churches and gods, spiritualties of all kinds, memories…

“Souvenir from Earth”, the first personal exhibition of Brankica Zilovic at Laure Roynette Gallery in Paris, is alreadya solemn promise that there will always be something torn from nothingness, destruction and oblivion. As we bring back a memory of travel, as one seeks to engrave in one’s memory – or in one, more forgetful of the phone or computer-the image of what has happened or been, “Souvenir from Earth” brings back into the heterotopy which is instore in gallery: buildings, landscapes, things, beings who are, or who were to be petrify, sometimes literally when the artist marries them to concrete, as much as to bring them back to life. Books, maps, photos, frescoes, carpets … In an almost encyclopedic attempt to collect bits of what life was like on this planet, here is “Souvenir from Earth”.

Brankica Zilovic’s relationship with maps and territories is a vast and deep adventure, which begins at the edge of “ La Pangée “(his first” planisphere “, 2011) and continues since, effortlessly.Exploring borders, fractures, schisms, rifts, by tugging, stretching, inventing, reinventing, triturating, nervous networks building “like synapses,” affirm how life is supposed to bubble anyway … and to resist entropy and death.

Since the 1960s, many artists (from Jasper Johns to WimDelvoye, Robert Smithson to AligheroBoetti, to name a few, were interested in cartographic representation as an aesthetic space for expressing a complex phenomenon beyond political or social geography, as an echo of territorieschanging.

“The inadequacy is intrinsic to the map,” said the American logician Nelson Goodman. The fact that artist like Brankica Zilovicis interested in mapping on time of Google Map indicates how much the artist’s maps acts not as adequate representation of a real but as materialization of a mental space, projection of memory order, imagination and desire.

This selective, subjective, and poetic vision of the world could be understood as a response to abstraction and dematerialization of the contemporary world. She makes a territory, certainly fictional, but visible to a paradoxically invisible world, “without body or face”, as expressed NicolasBourriaud. She proposes an atlas of the world, inevitably provisional, to testifies his struggling recomposition, in vain perhaps, against anessential nostalgia.

Brankica Zilovic’s maps fit perfectly into what Deleuze and Guattari what could say: they build a real more than they can transfer, they unravel and unfold in our times of self-withdrawal, they tear up, overthrow and shake up the territories, sketch themselves like meditations on past and present times as the design of the future.

The poetic and fictional dimension of Brankica Zilovic’s works don’t evade their biographical and political character. The diasporic spaces that she draws initially refer to her own story – coming from a “country that no longer exists” – the Yugoslavia, and to share, with her compatriot Marina Abramovic, the “guilt”, if not the “shame” of the war. It’s a work of memory and resilience implemented by the artist, eminently sensitive to the particularly tumultuous history of her Europe of Balkans from which she comes and that she is questioning through the series “No Longer mine” (2019), or “Lastview’’ (2019), a photograph embroidered with gold revealing, almost erased, the house of her childhood, on the eve of its destruction.

She embroiders, she says, to ward off the ghosts of the past. Secondly, it’s important for her personal story to be part of a universal story, and for her, Serbian, to live anywhere, to inscribes her presence in an open, multiple world, “All World”, as defined by Edouard Glissant, a thinker that she likes to refer. Her reflection, like her practice, is based on this idea of ​​interpenetration of cultures and imaginary of the world that continues to changes, hence her keen interest in images from here and elsewhere, maps and books, her insatiable curiosity of everything, which she satisfies in her travels, to verify that the land is “shared by all”. Her works are a mirror of this world, moving, chaotic. By the work of embroidery and threads, the elements meet, arise, disappear, transform.Glissant would say that from this chaos-world, the one we live in, the one the artist describes, a new humanity emerges or will emerge … If only in these subjectiveentanglementsand the history, the world that Brankica Zilovic tells is at the wobbling edge, out of breath.

We all possess this diffuse and agonizing awareness, if not of the collapse, at least of the world crumbling. We could say that this impression isn’t new. The History of Humanity is punctuated by moments of rupture of established orders, reversals and revolutions, emergences and crises … The crisis, explains Hannah Arendt, brings new opportunities to be and offers an opportunity for rebirth. But today, unlike our ancestors suffering the evil of the century – a vague in the soul between two decisive moments of history, “where we do not know, at every step we make, if we walk on a seed or on a debris ” – and to extend the medical metaphor, it’s not impossible that we are no longer in crisis, but at the apex, the crucial and definitive moment, where one survives … or passes away. There was a before but, will there be an after?

It might emerge the temptation to liquidate this lost old world, temporarily, waiting for an apocalypse, in a literal or a radical way, to really end it, as Nietzsche said, because there is small need for the human presence on earth.

Is there anything like this at Brankica Zilovic’s work? That could explain the lyrical and nostalgic dimension, almost feverish and romantic in many of her works, when the threads leaking out from her cartographies and her books could materialize a kind ofdecay, as black and white turn to gray photographs on concrete pieces as remains and ruins of time, soon faded … Brankica Zilovic was allowed to take the utopian nostalgia for an Arcadian past – deceptively contemporary inclination – but one could well interpret the emotion that emerges from these works as an echo more or less far away from, what Burkecalled, the sublime: something as order of terror and danger, the exciting joy, the edge of the precipice. Where we are, precisely, in the History of Humanity?

But at the same time, these same works, or others, magnify with all strength what still remains to be saved, just like the ice floe, the most visible, the most spectacular, and the most tangible symptom of climate change, in works: “Holy Icefloe” (2019), sewn in gold thread, “Puzzling world” (2019), realized in a technique of tufting gun colored and dense, or “4.15 million” (2019), the remaining area of ​​the world ice floe in 2019.

Her photographs on concrete express her fierce desire to fix, to save, by petrification, by  stratification of memories but also some monuments, often religious, French but not only, which she chose to show and preserve.

By embroidering ancient books (often chosen for their significant contents) with maps, sometimes similar to city maps besieged, citadels, sometimes letting escape from the blue of the sea like torrents, reactivates them in a certain way. As objects of knowledge and imagination in the process of disappearing into the digital vortex, they become the subject of a transmission, even if the text is lost behind embroidered by force representation in the thickness of the book.

However, it’s always a question of re-appropriation of images and things, in order to revive the world, to give a new breath despite a dark and abstract horizon.

This conjuration of the disappearance passes by a confrontation that can’t be more materialisticthan concrete as matter – countless hours spent on her embroidered books – very real, against the growing dizzy virtualization of our world, and by a profusion of mediums and materials inrecurring use. Richness of patterns, colors, threads, embroidery, expansion of the supports, the work of Brankica Zilovic hoista baroque dimension, formally and spiritually, to which the luxuriance of gold, used recurrently, is not alien.

First of all, of course, the influence of Byzantine art and orthodox iconography, which are very much present in the original culture of the artist. Ultimate material, a color that doesn’t live in the light but that bears its own radiance itself, gold symbolizes the pure shine, the divine light. We then think about the gold from Baroque vocabulary and aesthetics, this passion for emotion “push upwards”, this support of the most precious of subjects to religious feeling.

Giving meaning to the crisis, said Hannah Arendt, is resisting to the disappearance and to affirm that the new is still possible. And the new, wrote the philosopher, is always a miracle.

If, for Brankica Zilovic, the idea of ​​finitude, as essence of the existing, remains unacceptable, the act of creation appears as a medium to exorcise this curse, and joining by this to the older conceptions of art as a wayof survival beyond death, as a fragment of eternity. So, the act of creation to which Brankica Zilovic submits every day take part of this miracle, of this “promise of redemption for those who are no longer a beginning.”

This is how the exhibition in a certain way ends: with this large wall piece, simply called “Life” (2018), more colorful than most of the works presented. A monumental planisphere in complete freedom, in which volumes and thicknesses play with boundaries that dilate, burst, dissolve and reconstitute, a bubbling All-World and well beyond the respite, traversed by energetic jerks and synapses violent and joyful at the same time, with, says the artist,a certain frivolity, lightness and above all, an intense and radiant faith in life.