Sum of the Parts: Dimensions in Quilting 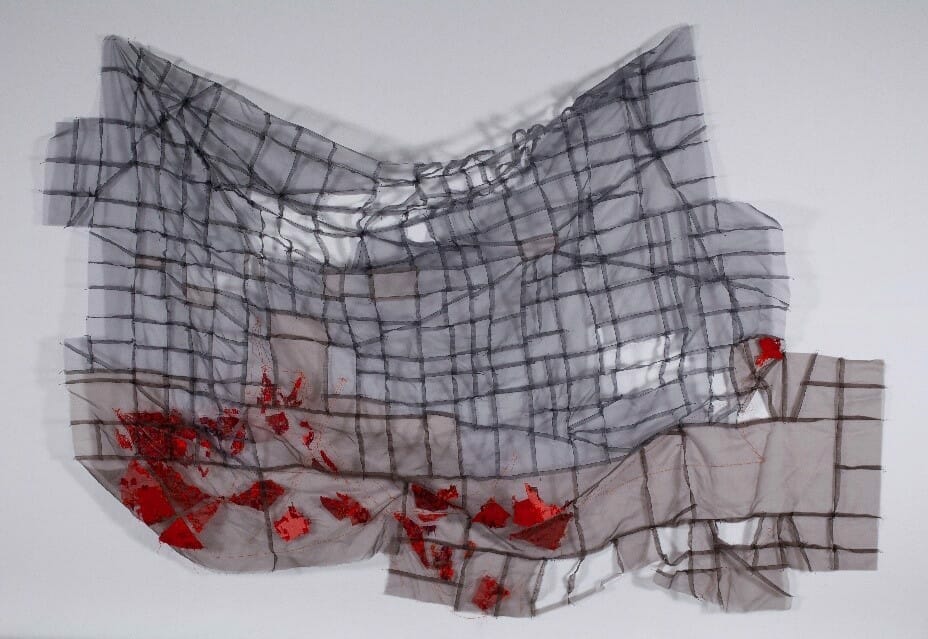 The five artists in The Sum of the Parts at Craft Contemporary explore the physical and conceptual dimensionality inherent in quilting. Traditionally, quilts are composed of several layers – usually a top, a soft layer of batting, and a back – joined together with extensive stitching. Those stitches are utilitarian and can produce rich patterns and textures. The artists in this exhibition build upon that layering through extensive folding and wrapping, cutting holes, incorporating three-dimensional elements, and adding light as an active component of their work thus expanding upon the form itself by pushing beyond its conventional structure.

The artists are equally concerned with the layers of meaning quilts can carry. Their materials and actions of layering, piecing, and embedding memories in materials record stories that have been ignored, and, by turn, become illustrations of their wishes for a more equitable world. Their work reminds us that quilts have always been radical sites of expression, bringing people together for community building and political action. The exhibition works are provocative for their physical structures and for the narratives they preserve and uplift. The histories embedded in the Sum of the Parts artists’ works remind us that quilts and abstraction existed well before Modernism. Quilts possess a distinct tangible and emotional texture that is infused in every stitch and swatch of material. As these artists demonstrate, a quilt becomes a quilt through bringing together its many, complex parts.

For exhibiting artist Kathryn Clark, her passion for quilting is equaled by a fascination with data collection which developed during the years she worked as an urban planner. Her deconstructed quilt tops serve as a map or historical record of the erosion of democracy since Donald Trump took office in 2016. Clark treats each quilt surface as a topography, piecing together sections of a sheer cotton organdy fabric to visually render areas and government buildings in Washington D.C. She then cuts away portions of her patchwork, leaving her intensive stitching to hold the delicate piece together. She seeks to demonstrate through quilting the fragility of the structure of democracy.

Carlos Spivey is a multimedia artist who started quilting in 2015, drawn to the medium for its softness and portability. He uses Dye-Na-Flow fabric paint on muslin to create portraits which he appliques to his colorful quilts. Drawing on his animation background, these illustrations of dignity represent the positive images of Black people that he never found in the media while he was growing up. Quilting gives Spivey an avenue for exploring the many layers of Black American experience, most especially its optimistic imagination and spiritual vision. In his three quilts in the exhibition, Spivey attached a lush layer of three-dimensional flowers which his subjects arise from.

Known as an improvisational quilter, Lavialle Campbell often creates largely monochromatic quilt patterns, exploring the depth that can be achieved through extensive piecing, folding, and stitching. She uses the language of abstraction and act of quilting as tools to cope with physical illness and speak to larger narratives of healing and survival for other Black American women. Her exhibition pieces are part of an ongoing series she started while working on a large collaborative project with a friend. In the series, Campbell contracts bright compositions of yellow and chartreuse with dark compositions of purples, grays, and blacks while also demonstrating a dramatic range in scale of her quilts.

Sabrina Gschwandtner started making what she terms “film quilts” after receiving a box of 16 mm films that were deaccessioned from the Fashion Institute of Technology and given to her by the archivist of Anthology Film Archives. The films were short textile documentaries, dated between 1950 and 1980, that examined textiles and portrayed the women who made them. After watching the films, Gschwandtner was saddened that they were not considered valuable enough to archive, and she determined to memorialize this archive of “women’s work” – both the makers depicted in the films as well as the women film makers and editors who continually go unrecognized. To construct her film quilts, Gschwandtner cuts and sews lengths of film together, referencing traditional American quilt patterns, and attaches her pieces to a light box. Her pieces reactivate the films’ narratives, illustrating the intensive skill and time of all the references makers, and literally shines light on these unvalued histories.

Jade Yumang works in intensive, research-based series which examine how queer optics permeate into culture. Included in this exhibition are several sculptural constructions from their series, Drum, which reference a 1960s queer magazine of the same name. Drum differed from other queer publications of the time as it flagrantly blended sexuality, politics, literature, and humor. Each quilted construction in the series represents a page from the issue of Drum that was seized by the U.S. Post Office and used to federally indict the editor. The artist digitally printed each page on to fabric which was pieced and quilted, and then assembled with found objects, furniture, and upholstery. The decorations, patterns, and colors reflect queer aesthetics of the same timeframe as the magazine.