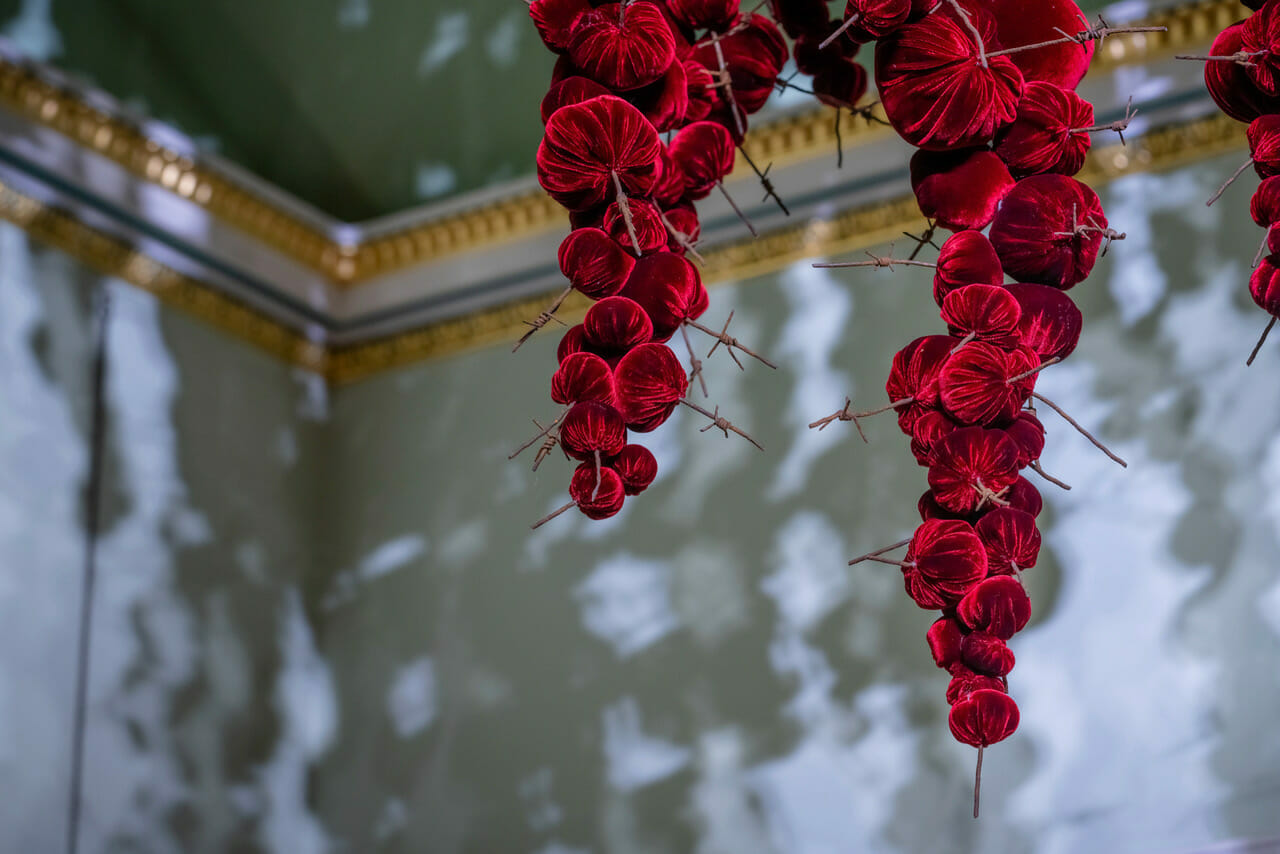 Some artists’ work reaches the viewers on a deeper level than others.

For me, this is the case with Susie MacMurray, a British multidisciplinary artist; a classical musician before becoming a visual artist. A 2001 graduate in Fine Arts from Manchester Metropolitan University, she now has an international exhibition career developed between Europe and the United States.

MacMurray’s practice balances matter and place, memory and history, body and spirit, and lies in between poetry and alchemy.

Susie, in your artistic practice you use unexpected materials in unexpected ways: the result are destabilising artworks for the observer. What is the process that guides you in choosing the materials? And does the experimentation of the material also have a conceptual meaning in itself?

In my process I try to begin playfully, often asking ‘what if?’ I’m looking for a conversation, or some kind of frisson between materials/objects. Yes, I do find it difficult to detach or disregard the various cultural associations a material or thing might have. It’s a kind of semiotics of stuff as opposed to words. Therefore, what they are, where they come from and the way they interact with other things, with the space they are in and with the viewer, has to be juggled and balanced in the same way as the physical form of an artwork. The two aspects are not separate. I start playfully but as work develops, I become increasingly demanding in how a thing might be. I am frequently dissatisfied!

In the textile medium, an element that is in many of your works, is there an intrinsic allusion to memory, an evocative figure?

I think given what I’ve just said that if often the case. For me making art is a way of trying to understand, and perhaps to reassure myself with regards to the transience of life. I will often use a textile of some kind because it has a certain association with the human body, and will evoke that in the way I’ve just spoken about. For example, in Echo 2006 in a deconsecrated church I used many gossamers fine hairnets, which became ethereal suspended cranial forms when holding a few tangled strands of used violin bow hair. The use of gold embroidery thread in Promenade 2010 at Kedleston Hall referred to the precious ‘Peacock Dress’ made of cloth of gold and housed in the museum below the space. It spoke about memory, beauty, wealth, passing time and the eventual unravelling of everything.

The balance between materials of different texture and function, sometimes even opposite (such as military barbed wire and silk velvet, for example), in your works is one of their poetic aspects. Is it a metaphor for life always poised between joy and pain, fragility and strength, harshness and lightness?

You put that very well! Yes, that is a large part of it. It is an overwhelming thing to think about, and can be exhilarating and horrifying in equal measures. I think perhaps that is why I have been drawn to exploring these ideas in a physical, tangible way. It is like peeping round a curtain at something too bright and blinding to look at full on.

What are the themes you explore in your artistic research?

Really it is what we have been speaking about. On the one hand it is a very physical playfully way of working, while at the same time I’m watching out constantly for the emotional and cultural echoes I see as I am living my life. People have asked me if my work is feminist, and I have to say how can it possibly not be? I am in a female body and therefore unavoidably my interaction of the world, socially, culturally and physically is female. But that is not so say that my work is exclusive, or exclusionary. Negotiating the paradoxes of fragility/strength, vulnerability/power and transience/permanence (if there is such a thing), are universal to all humans, but my experience of that is from my own perspective.

Your site-specific installations are always deeply evocative. What is your relationship with the space that hosts your works? How are these works born and developed?

Often someone will reach out and we have a conversation about what their place/space/site/venue is and how it is used and what their expectations, parameters and hopefully desires might be. It works best when it is a collaborative journey and one of the things, I love is the relationships that develop during working together. I’ve often said that it may come from my time as a professional orchestral musician. Creating something with the potential to be more than the sum of its parts by collaborating with others, making something you couldn’t do on your own is similar to the immersive experience of being in a symphony orchestra.

With regards to developing my ideas, I will spend as much time in the space as I can, read what I can and importantly speak to people who know the place and its stories. Sometimes the germ of an idea will come from a throwaway line or anecdote someone has shared. Then it is the physical process of finding relevant materials, refining how they could manifest themselves and speak together within the space so that in the end only what needs to be there exists. If successful the ideas, materials and space become tuned together as a whole.

What is – if any – the work you have created that has involved you most emotionally and intellectually?

For personal reasons the garment sculpture Widow 2008. I made her 2 years after my husband died, out of soft black Napa leather pierced with around 100,000 large 50mm dressmaker pins. Most recently I have been greatly satisfied making Stalker. For me she is a study in elegant power and brittle exposed vulnerability. Made from many pairs of deer antlers sliced into thin slivers, sanded, drilled and stitched to canvas she was a complex practical challenge. Much of her making took place during Covid 19 lockdown which added another layer of meaning to her for me.

Can you tell me what are your ‘garment sculptures’?

I call them ‘garment sculptures’ because they are not dresses. They are sculptures that look like garments, but they could not be worn and are not intended to be. In one sense they are all self-portraits. They explore facets of female identity and experience. Using this form is a pragmatic way to invoke the body. My intention is that the viewer identifies directly with them in a way they would not if the materials were presented as either a panel or a formal sculpture. What formal shape should such a sculpture take that wouldn’t remove the focus from a direct bodily experience?

What does it mean for you to be an artist and what role does art play in your life?

Much of the time I make art because I need to. It helps me to survive. I love the self-directed mixture of private exploration and collaborative working.

Among your installations, there is one that moves me deeply: ‘Gathering’. What was the genesis of this work?

Gathering came out of a collaboration with fundraisers for a wonderful hospice in Cheshire, UK. They had identified a nearby stately home Tatton Park as a venue to use for a temporary commission. My own husband, and also myself and our children would have greatly benefited from the support of such a place. I was deeply moved by their compassionate care, and how they gathered round to support people and their loved ones at their greatest time of need and vulnerability. My impression was of doctors, volunteers and nurses gathering up the dying and their families in a multitude of arms, and of wounded bodies and hearts not being drawn back from in horror or shied away from, but cherished, dignified and held. I worked with hospice volunteers over 12 months to make the individual elements of the piece, each of which is a bundle of deep red silk velvet gathered round a piece of historic military barbed wire. During 2019 the work was suspended through the rotunda in the entrance hall of the mansion. Individual elements were later used as gifts of remembrance and to raise funds for the hospice.