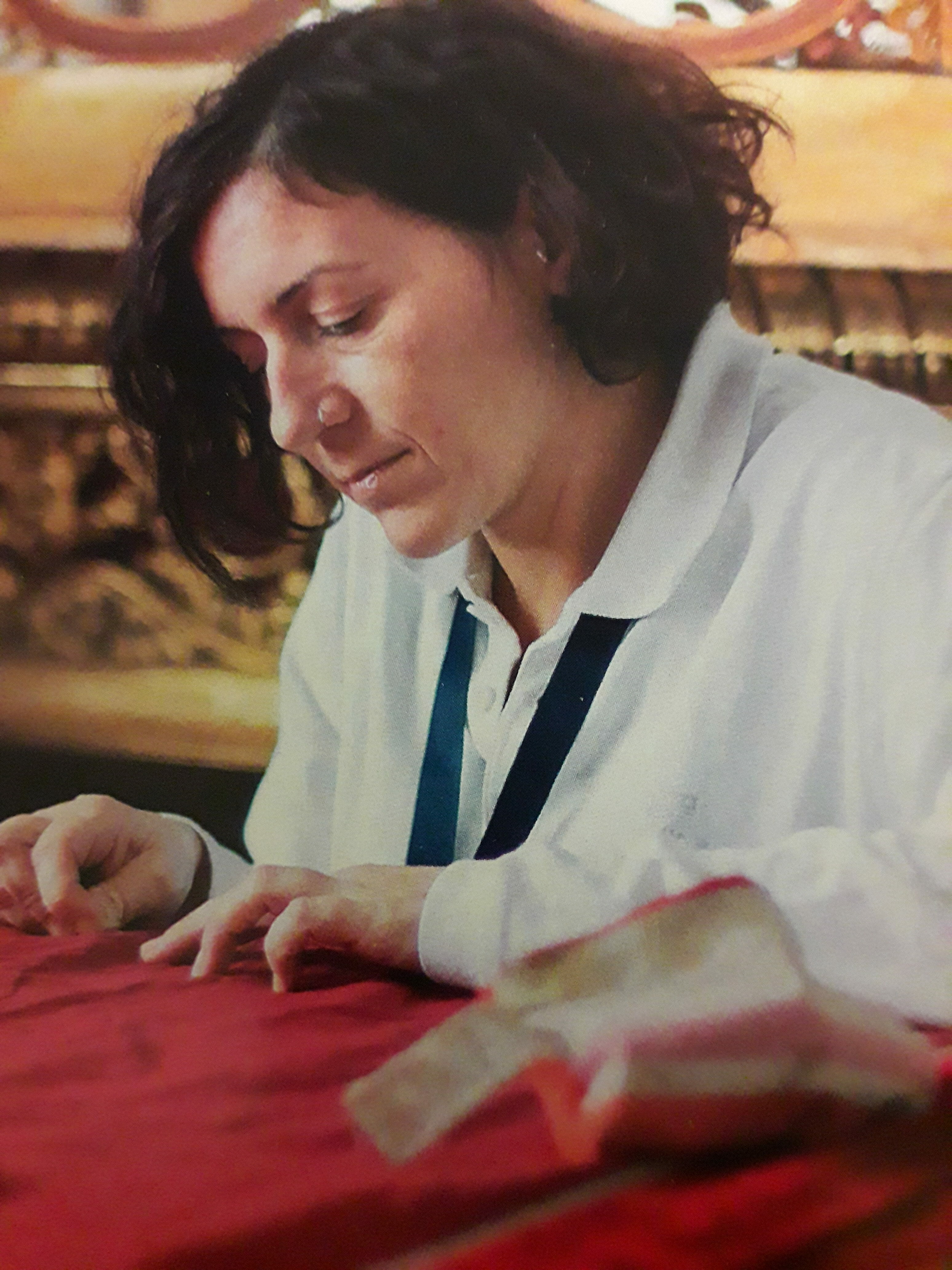 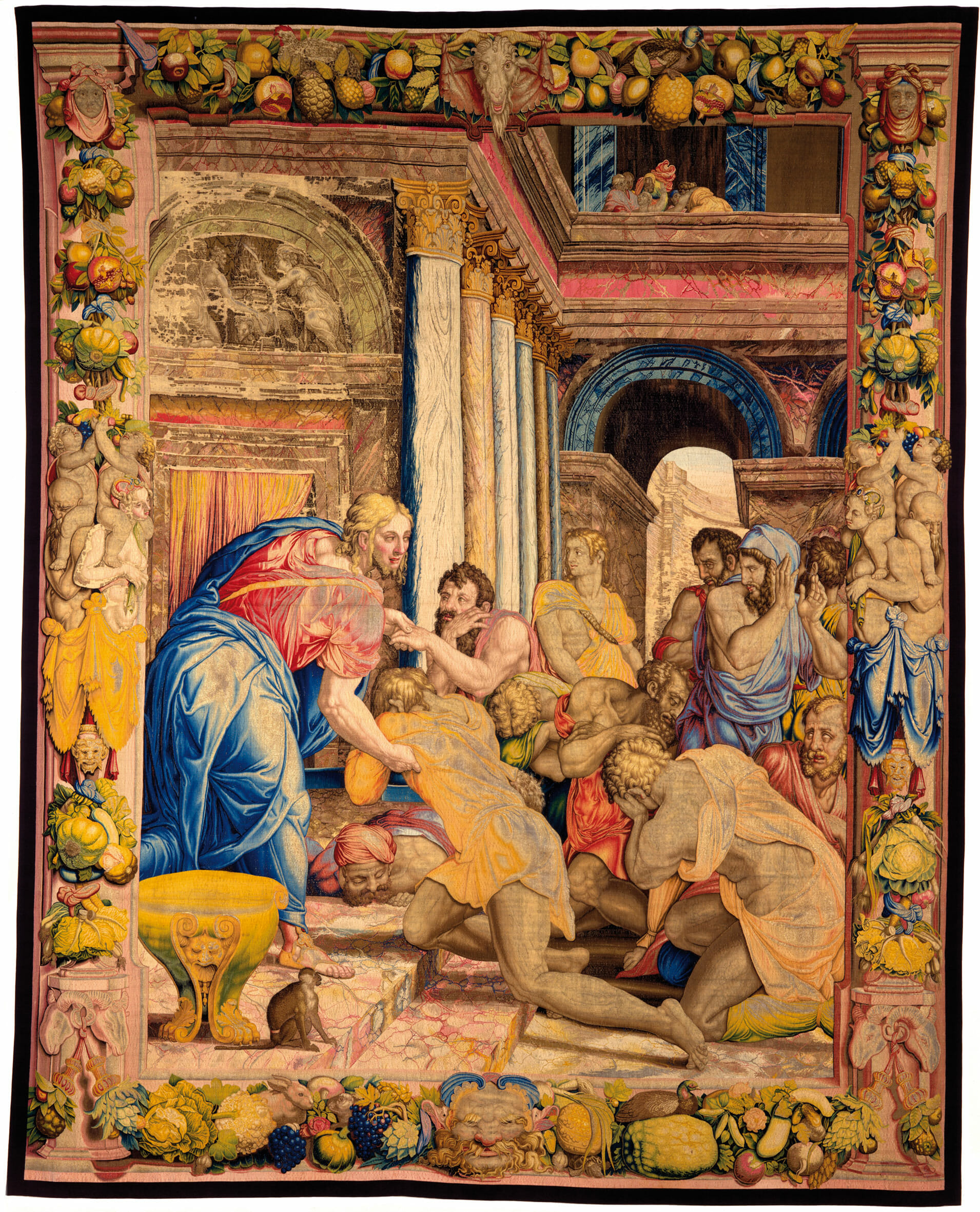 The term “tapestry” derives directly from the city of Arras, a town in northern France which was an important production center. It identifies a stained fabric with particular characteristics and techniques that distinguish it from stained cloths for domestic or decorative use found in the Orient and in the classical world

The traditional weaving technique has changed very little over the centuries, the tapestry is an interweaving of warp threads which are completely covered by those of the weft. The processing can be performed on two different types of loom: high heddle loom, low heddle loom.

The low heddle loom was horizontal, slightly inclined and the heddles were raised by means of pedals placed under the warp, the cardboard was under the warp and was reproduced in the opposite direction. Its use made work faster, both in the control phase and in the heddle handling phase.

It is appropriate to spend a few words about the cardboard, the starting point for any traditional tapestry; this could draw inspiration from a painting, an engraving or a miniature, or it could be conceived and created by the same author, who, from the fifteenth century, also had the task of indicating the colors to be used. The creator of the cardboard, at times, provided a sketch or a model on a smaller scale which was then developed by another agent chosen from among the workers close to the manufactures. In general, the cardboard was the work of famous artists and remained the property of the tapestry maker, who thus had the opportunity to replicate the model several times.

The beginnings of a documented history of tapestries takes us to the West around the eleventh century, a first example is the San Gereone cloth, a wool tapestry with a linen warp, from the church of St. Gereon in Cologne. The decoration, which we know from the fragments scattered in various museums, shows the repetition of medallions containing a bull attacked by a winged griffin, a western-inspired decorative motif, more precisely, of Germanic inspiration.

Notoriously, the major tapestry production centers are located in France (Arras, Tournai, Paris, Beauvais, Aubusson) and in the Netherlands (Brussels, Bruges); from the beginning the processing was organized as an artisan workshop or a small industry, it was this working structure, independent of a single client, that facilitated subsequent variations of the subjects represented, leaving space also for profane compositions.

For centuries the cloths have had a specifically sacred destination, from the fourteenth century onwards, the tapestries enter the residences of the princes, having a practical importance both for protection from the cold and as a piece of furniture, indicative of economic conditions and social status. The favorite themes were chivalrous illustrations accompanied by sacred depictions of episodes from the Old and New Testaments.

The Italian situation is completely different, and it is precisely the organization of work that determines this difference. The workshops were directly employed by a prince or an illustrious patron, therefore, the Italian tapestry has the task of transmitting the prestige and social status of the client. Let’s not forget the particular cultural and artistic context in which the history of the Italian tapestry is inserted, around 1400 a complex Italian figurative civilization flourished which sanctioned the supremacy of painting, the preparatory cardboard became fundamental, in fact, in most cases, it was entrusted to the most sought after artists of the time.

Throughout the 1400s there are testimonies of a large presence, in various centers, of technically better prepared French and Flemish tapestry makers, invited  to the peninsula to give life to cardboards* by local artists.

The oldest nucleus of tapestries woven in Italy probably by Italian tapestry makers is made up of the Allegories of the months, commissioned by the Marquis Giangiacomo Trivulzio and woven in Vigevano in a laboratory created for the occasion. Twelve cloths made between 1501 and 1507 perhaps on Bramantino’s cardboard of full Renaissance inspiration. This was an isolated experience, in fact, successive series of tapestries were commissioned to Flemish tapestries; Leo X turned to Pieter van Aelst in Brussels to carry out the Acts of the Apostles on cartoons by Raphael. The stylistic qualities of the Raphaelesque models forced the artisans from across the Alps to measure themselves with the compositional balance and spatial organization of Italian Renaissance art. From this moment there is a fruitful collaboration between Italian painters and Nordic tapestry makers.

The most famous Italian tapestry of the sixteenth century was the Medici Tapestry, commissioned in 1546 by Cosimo I De ‘Medici. Initially he made use of the experience of famous tapestry makers such as Carcher and Rost, employed in the production of the first series of tapestries with the Stories of Giuseppe, a monumental work consisting of 20 cloths and destined for the Sala dei Dugento in Palazzo Vecchio. The canvases  made by Bronzino, Pontormo and Salviati are a testimony of the Florentine mannerist culture, characterized by an accentuated monumentality with an almost metaphysical spatial division.

The sixteenth century marks the definitive consecration, also in Italy, of the tapestry as a widely distributed art product, but it was especially in the Baroque period that it assumed full autonomy as a true artistic expression

The seventeenth century returned to the tapestry its original decorative function by summarizing in itself a mediation between painting, architecture and furnishings. While the activity of the Medici Manufacture continues, the Barberini Manufacture was founded in Rome in 1627 on the impulse of Cardinal Francesco Barberini. The Flemish tapestry maker Jacob van den Vliet was hired to create the stained cloths, while the cardboards were entrusted to Pietro da Cortona. The greatest results came with the completion of the French series on the Stories of Constantine in which Pietro da Cortona privileged the appearance of the Roman emperor as a Christian and a man of faith.

The rise of the Barberini Manufactory, capable of translating the decorative liveliness of the Baroque with extraordinary scenographic effects, contrasted with the opposite fate of the Medici Manufacture which, relying on the lines of the late Mannerist tradition, maintained high productivity but with modest results at the quality level .

The turnaround occurred with a profound reorganization of the laboratory activities around 1715 but, the Florentine activity ended definitively in 1737 with the death of Giangiacomo and the extinction of the Medici dynasty. The merit of the renewal is attributed to Vittorio Demignot who, had affirmed himself in a private laboratory commissioned by Pope Clement XI and located in Rome in the Hospice of San Michele a Ripa. The production of this Roman tapestry was distinguished by the themes of the representation more related to occasional events than to vast decorative programs.

In the 1700s the tapestry production centers were Turin and Naples; starting in 1730, Carlo Emanuele III of Savoy undertook the renovation and expansion of the Royal Palace of Turin, for this occasion he set up a laboratory with low-hued frames for the decoration of the new apartments. The program of work involved the creation of various series of cloths that enhanced the courtly and celebratory character rather than the narrative aspect. The Stories of Alexander, the Stories of Caesar, and the Stories of Cyrus were made.

In Naples, Carlo di Borbone called the Florentine tapestries left without work to give life to the Neapolitan Manufactory, the credit for the success of this manufacture goes to the Roman tapestry maker Pietro Duranti in charge of completing the series of twelve French tapestries with the Stories of Don Quixote, intended for the rooms of the Royal Palace of Caserta. The tapestry business ended in 1806 with the entry of the French into Naples.

From that moment on, there has been an inevitable decline of the tapestry, also due to the prohibitive costs, the cloths no longer corresponded to the tastes of the time but satisfied the needs of individual clients. And then machine-woven or painted tapestries with purely decorative contents begin to appear.

Among the avant-gardes of the early 1900s, only Futurism was interested in the tapestry; Enrico Prampolini was a designer of tapestries, rugs and fabrics, Giacomo Balla and Fortunato Depero attempted several times in the creation of tapestries but, with Futurism we can consider the tapestry season in Italy come to an end.