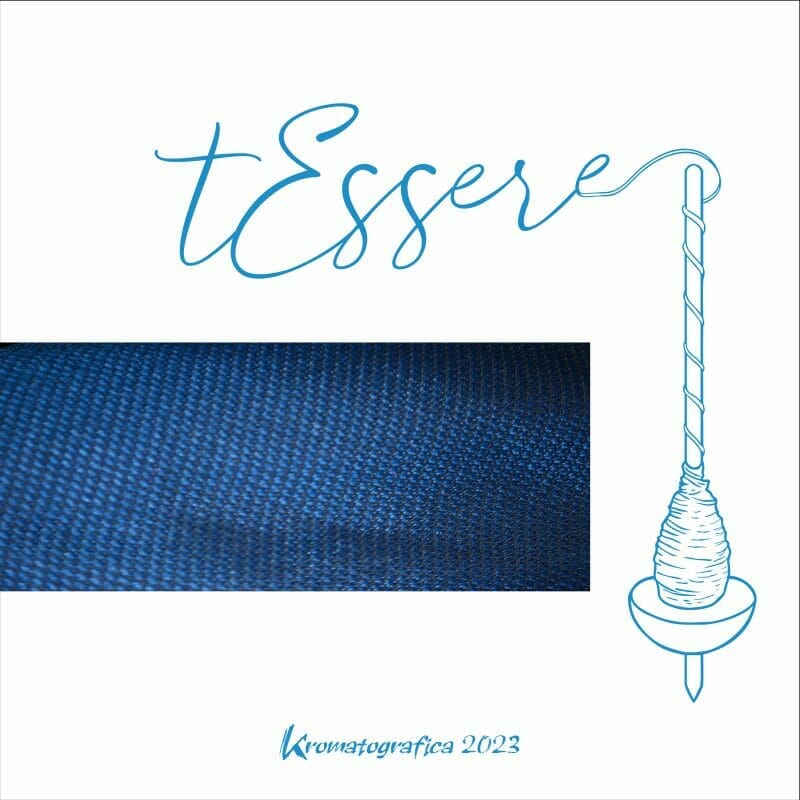 This is the title of KromatoEdizioni/Kromatografica’s 2023 calendar, an editorial product, with careful attention to graphics and packaging. Both the practice of textile art in the history of peoples, and the dimensions and themes investigated by the artists, highlight this profound link between ‘being’ and ‘weaving’. The project is curated by Evelina Barone. A veritable catalogue, the calendar presents an extensive introduction to the theme of weaving in the history of mankind, in the symbolism of peoples, in myth, in cultures, in art. It speaks of Sicily’s rich textile heritage and contamination. Palermo was the first centre in Italy of fine silk weaving, which was carried out in the Tiraz of the royal palace from the Arab domination until the reign of Roger II. The royal palace was a great multi-ethnic lab, where Arabs, Armenians, Greeks, Persians, Syriacs, Franks, Egyptians and Normans worked. The island was indeed a place where peoples met, and the magnificent Tiraz workshop can be seen as a metaphor for the Sicilians’ ability to weave diplomatic and civilised relations, to create an unparalleled model of inter-ethnic coexistence. Thanks to Claudio Drago’s photographs and Giorgio Cappello’s filming, it was possible to document the work of some of the last women weavers working on late 19th century looms in western Sicily, as well as the work and vision of artists of different nationalities using the medium of thread and weaving.

The calendar and the accompanying exhibition propose a journey into the art of weaving, retracing its history, its symbols; rediscovering the tradition through encounters with women who still weave on ancient looms dating back to the end of the 18th and 19th centuries; following the trace of the evolution of this art through the artists who have made it their own and reformulated it in order to create new individual or collective narratives. The lexicon revolving around the thread has recurrences ranging from fairy tales to literature, from Magna Graecia to the Bible. Born to meet man’s essential needs – to cover oneself, to shelter oneself, to create utensils – thread has acquired a semantic, symbolic and metaphorical force beyond geography. In Greek myth, the Fates or Moire cut the thread of life after unravelling it, like the Vedic deities Yama and Nirrti. The spindle or distaff is the symbol of the Great Goddesses such as the Eigizian Neith or Proserpina. Plotting can also be a form of self-determination, beyond fate. To plot also means to go against a system, to subvert patterns, to alter reality. Ariadne, Penelope, Arachne, Andromache, Athena, Helen, Pandora, Philomela, Lysistrata transcend domestic virtue through the skilful use of thread. For Ariadne the thread is rescue, for Penelope individual and political action, for Philomela the tapestry is an instrument of denunciation of the violence suffered. The universe of thread thus becomes a metaphor of the human being, of his power to decide for himself, to challenge fate, subvert a condition, mark the time of his own existence. Just think of the scarves and shawls of the mothers of the Plaza de Mayo, on which the name of their desaparecido son was embroidered to reaffirm their denied identity, and the arpilleras, the patchworks denouncing the Chilean military regime. Contemporary artists make it a powerful tool for reading the world. Even if tracing a history of the role played by the textile medium in the poetics of the early 20th century means talking mainly about women. The artists involved offer different interpretations of textile art, both in terms of the materials and techniques used and the concepts and dimensions investigated.

Rita Lazzaro used sewing to weave communities with the WIR project. Sicilian, a multifaceted artist, she lives and works in Moers, Germany. In response to the isolation and estrangement experienced during the pandemic, with the loneliness experienced, Rita Lazzaro created the WIR (We) project, which soon became a social project. The utopian idea was to allow the inhabitants of Moers to create a huge patchwork by sewing together many pieces of fabric, and each inhabitant contributed a 15 x 15 cm piece from an old garment. Rita was fascinated by the fact that so many people were socially, politically and religiously connected, despite the cultural variety that characterises this colourful and multifaceted city. The result of this composition is the work called CUBO: geometrically defined as ‘the side of the square to the power of three’. We can imagine that each person inside this patchwork cube feels enveloped and protected, just like in a mother’s womb.

Jonida Xherri weaves threads into carpets to claim the rights of the foreigner and create belonging. Her work combines art and craft in a recovery of skills and traditions that belong to all peoples, namely weaving and storytelling. Jonida brings back to the centre of artistic research the relationship with the other as the fulcrum of all civil coexistence. She lived in Albania until the age of 22, when she arrived in Italy, and for a period she experienced a void in the idea of ‘home’, a void that through art she transformed into carpets woven as a symbol of welcome and hospitality. Migration, rights, environment: at the centre of Jonida Xherri’s work are always social and topical themes. Interlacing and weaving are the most recurrent techniques she relies on to create works, including large-scale tapestries and carpets.

Aurora Mica creates carpets in women’s circles, to help every woman identify and release her most authentic self. Aurora lives and works in Ortigia. Aurora resembles the poets and poetesses, the artists she quotes, as she shows a tapestry, caresses a seam, tells the story of a fabric. There is a trace of Sicily in her creations, baroque, as a painter friend called them. Passionate about textiles, all of them, she prefers antique, or old, blankets, because they speak to her, they tell the story of women’s lives. Because of their function, blankets are steeped in the moments of life: everything decisive happens there (birth, reproduction, illness, death). Recomposing the fabrics into a new, more complex and harmonious design means harmonising and recomposing all the joys and sufferings. Aurora Mica resorts to the technique of patchwork or, better still, madness. The artist captures an image that triggers creation on an unconscious level. The production also constitutes a subversion of the traditional canons of combining shapes and colours. There is a series of textiles dedicated to the feminine, conceived as a rediscovery of identity. For too long the potential of women has been repressed and now, with this production, the Syracuse artist wants to contribute to making it manifest.

Rossana Taormina works on a recovery of memory, with the constant desire to safeguard anonymous existences, trying to give them a well-defined space.

Rossana Taormina was born in the Belice Valley. The ruins of her childhood landscape devastated by the earthquake of 1968, whose rubble daily returns objects and fragments, and the parallel construction of the utopian space of Gibellina by the greatest masters of contemporary art of those years, profoundly marked her formation. Experiencing the progressive loss of her childhood’s places and the consequent feeling of disorientation are to be considered the constant coordinates of her poetics which, with a predilection for the objét trouvé, welcomes and stratifies suggestions linked to areas of personal interest such as archaeology, cultural anthropology and poetry. The artistic language, of which the thread becomes a privileged tool, gradually opens up to the contamination of techniques and traditions, always remaining faithful to the investigation of space and memory, social dynamics, the sacred and its rites. She uses photos of strangers to maintain a necessary emotional distance from the object, but for her works on fabric, whenever possible, she uses those that belonged to her own family. The artist thus sublimates personal urgency into a delicate speculation on universal themes.

Sylvie Clavel, who makes sculptures driven by a desire for externalisation, by a detachment from the self.

Born in Paris in 1953, she works between Sicily and Paris. The practice of dance, performed with great companies directed by Carolyn Carlson and Francoise Verdier, together with yoga, allowed her to explore the psychophysical dimension of being, which she then transferred to her textile work under the guidance of Chilean artist Chacon Avilà. An accident derailed Sylvie’s path and it was, at that point, the ropes, the threads, tied together, joined in the right tension to achieve a form, a desired figure. Sylvie’s enormous sculptures often assume positions that her body can no longer support. During her stay in the United States, she learnt about ropes, strings and knotting. “Those ‘things’, those materials, subdued or restless, responded to my desire for externalisation, for a necessary detachment from myself. I have no instruments other than my hands and fingers, in contact with the woven strings, preferably of vegetable origin. The form is born from the contact between the string and my fingers, from spontaneity, from improvisation, or from error overcome with patience and vigilance’.  Her creations refer to archetypal figures sedimented in the collective unconscious. A powerful symbolism that moves between East and West. The sculptures are often large in size and the creative process becomes a psychophysical ritual in which yoga meets the art of knots.

Saba Najafi conducts work on memory and the unconscious. Iranian, she lives in Milan. Her artistic research focuses on the inner world and the unconscious, in an attempt to bring our gaze to the invisible part of our being: the fragility, resilience and complexity of our existence in relation to nature, others and the world. Saba Najafi uses the shape of the stones as a reference to memory; we can consider them the memory of the earth. They are covered with threads and strips of cotton, symbolising the link with our experience. On some parts there are writings in Persian calligraphy, in the Farsi language, in the form of a diary, only partly legible because memory always remains a personal experience. The knot often recurs because of its strong symbolic representation: in the land of Sheba, in Iran, since ancient times, it has been woven in shrines to ask for a grace, in the hope of seeing one’s need or desire fulfilled. The world and the times we are living in are characterised by climate problems, wars, injustice and suffering, perhaps more than ever before. The ‘Knot of Hope’ is a collective request for grace so that the common desire for a better world may be realised.

This work of research is translated into an exhibition featuring the works of the artists involved. The interviews will be available on the Youtube channel and on the Kromatografica website. It will be possible to access the video interviews via a QRcode in the calendar. The soundtrack will be a piece by the duo CurAmunì, composed for the occasion, entitled “Sciamitu”, a product of the Sicilian textile tradition, whose rhythm recalls the movement of the loom and the slipping of threads between the warp and weft hinges.

The exhibition will be inaugurated on 13 January 2023 in Ispica (Ragusa) at the former Sciabica church.

The distribution of the calendar is free of charge. The public is asked to make a free offer to set up a charity fund for associations working in the social field or families in need. Thanks to the involvement of artist Saba Najafi, an Iranian association working in support of women’s rights has been identified.