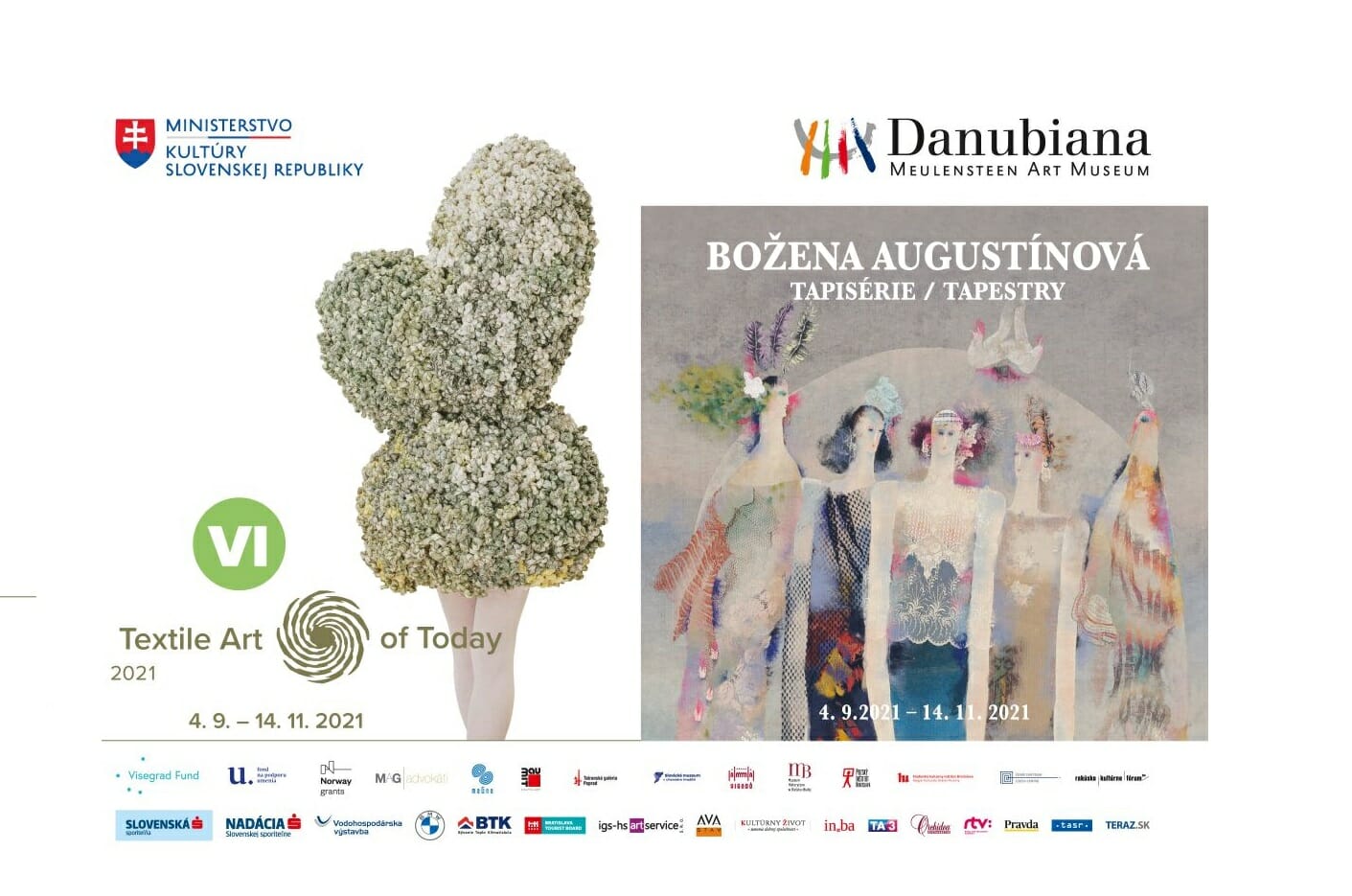 Textile Art of Today is an international art project that presents contemporary textile work; it is the largest project of its kind in Central Europe. It differs from other global textile exhibitions by the fact that it has five re-installations in significant galleries in the four Visegrad countries (Slovakia, Czech Republic, Poland, Hungary). Its significance is underlined by the support of the Minister of Culture of the Slovak Republic. The Textile Art of Today project strives to present textile as a modern and dynamic discipline which transcends the boundaries of the classical perception of textile art. The intent is to unite artists from all over the world and present current trends in the field. Through their work, many artists actively express their standpoint regarding global problems. Since the beginning of this event, the international jury has granted the prestigious Grand Prix of Božena Augustínová, named after the significant Czechoslovak artist. Other prizes include the Excellence Award for outstanding work, the Award for Crossing Boundaries in Textile Production given by board of curators based on the proposal of its chair, the Students Award for innovation and the Awards of Galleries and Cultural Institutes.

Attractive chamber works, provocative installations featuring pressing themes, interactive concepts which pose questions about the position of humanity in the contemporary world and its place in the future. For a long time now, textile has been about much more than just decorative “rugs”; it is a topical medium with a confident artistic mission.

The 6th year of the international project entitled Textile Art of Today, which opened on September 3, 2021 at the Danubiana Meulensteen Art Museum in Bratislava-Čunovo, also convinces us of that. The exposition will later be installed in galleries and museums in Budapest, Poprad, Bielsko-Biala and Uherské Hradište, thus, connecting the Visegrad Four countries as well as five continents. 312 artists entered the triennial, while 40 gifted young artists submitted their works in the students’ section. After carefully assessing each work, the Commission selected the works of 83 artists from five continents; 17 of these works were assigned to the students’ section.

Since the environment is this year’s leitmotiv, the Enviro Award, for which 31 of the exhibiting artists will compete, will be awarded for the first time at the Textile Art of Today.

Invitations to participate in this international event were also accepted by significant personalities of the contemporary art scene, such as Kari Anne Helleberg Bahri (Norway), Eszter Bornemisz (Hungary), Włodzimierz Cygan (Poland) and Olafur Eliasson (Denmark).  Their participation confirms the influential international status of this event. The accompanying exposition at the Danubiana Meulensteen Art Museum features tapestries created by Božena Augustínová-Rochovanská (1939 – 2005). The Grand Prix of Božena Augustínová is awarded at this festival as a tribute to her artistic legacy in textile.

Bahri, Cygan, Eliasson and Shoplifter – Stars of the global art scene, coming to the Danubiana

Kari Anne Helleberg Bahri, Włodzimierz Cygan and Olafur Eliasson will be the biggest stars of the 6th year of the Textile Art of Today, festival of contemporary art, which will have its premiere exhibition at the Danubiana Meulensteen Art Museum in September 2021. Kari Anne Helleberg Bahri (1975) one of the most influential Norwegian artists, participated in the exhibition of the Royal British Society of Sculptors Galleries which took place last year in London. The theme of her work is the combination of the body, existence and clothing. She likes to question the definition of the concept of clothing which she removes from its traditional form with invention. Polish artist Włodzimierz Cygan (1953) gained international acceptance thanks to his unconventional use of mono fibers in a textile structure in which the phenomenon of the light transforming durability of the material plays an important role. Olafur Eliasson (1967) represented Denmark at the 2003 Venice Biennale and enhanced his reputation by his Weather Project at the Tate Modern, London and Green River at the Serpentine Gallery, London. The influential Studio Olafur Eliasson operates in Berlin and has prepared many installations in public spaces all over the world. Green Light – an artistic workshop was a part of the 2017 Venice Biennale. Hrafnhildur Arnardóttir (1969) aka Shoplifter, is of Islandic origin but her studio is in New York.  She will be the fourth star. Her cooperation with singer Björk on the art design of her album Medúlla and her installation at the Islandic Pavilion at the 2019 Venice Biennale made her famous. Her Venice project entitled Chromo Sapiens attracted huge interest. As Birta Guðjónsdóttir, curator of the project said, “you entered the pavilion as Homo Sapiens and exited as Chromo Sapiens”.

Not even the global pandemic has prevented the enormous interest of visual artists from all over the world in the Textile Art of Today project. This renowned event again attracted the attention of a broad spectrum of artists and its 6th year featured the submissions of 272 artists from every continent and as well as 40 submissions to the students’ section. ENVIRO was chosen as the focus which we want to accent in the presentation of this international exhibition of textile art.  It does not lack inventive visuals crossing traditional boundaries of art while asking disturbing questions and emphasizing current technologies. This is also why the ENVIRO AWARD will be presented for the first time at Textile Art of Today, which will be attended by 57 of the 312 registered artists and 12 students.

Deň plný snov (A Day Full of Dreams), Vznešená (The Noble), Tajomstvá kráľovskej cesty (Secrets of the Royal Way), Šťastie prinášam do vášho domu (I Bring Happiness to Your Home), Snívanie vo vlnách (Dreaming on Waves), Čakanie na dúhu (Waiting for a Rainbow), Na krídlach snov (On the Wings of Dreams) are some of the titles of her tapestries.  They are imbued with poetry and in fact they are artistic verses, woven for those who can read them from the inside, but also for those who come from without. Yes, the art of Božena Augustínová is open and accessible to all. She makes no distinction, but opens her arms to anyone willing to tune in to the wavelengths of their own dreams. She hands out helping yarn, but leaves it up to them whether they will entwine it in their ideas and infinite imagination. I was lucky to know Božka in person. Always cheerful, hospitable and empathic. Like her paintings, she resembled spring in full bloom. She was interested in others and gladly responded to those who were interested in her world. I frequently asked her about the content and origin of her works. “How are they created? Like dreams,” she replied and added with a smile, “You just need to capture them at the right moment. It’s not so simple sometimes… That’s why I prefer working at night, when the apartment is quiet and I can concentrate on them.”

I was fortunate to have the opportunity to prepare several exhibitions for Božka – mostly along with her sons Andrej and Martin, as a continuation of their family story. That was also why we often entitled them as we did. They are never-ending stories which, even after her unexpected passing, remain among us as pleasant thoughts, like a pleasant trembling that we strive to preserve for as long as possible. Art has many colors and passions. Božena Augustínová’s tapestries, which are exhibited as an accompanying exhibition of the 6th year of the Textile Art of Today at the Danubiana Meulensteen Art Museum, are also about these emotions. Although her work is also comprised of paintings, graphic work and illustrations, her woven dreams are the most suitable for this international event initiated by her sons.

Text by the curator