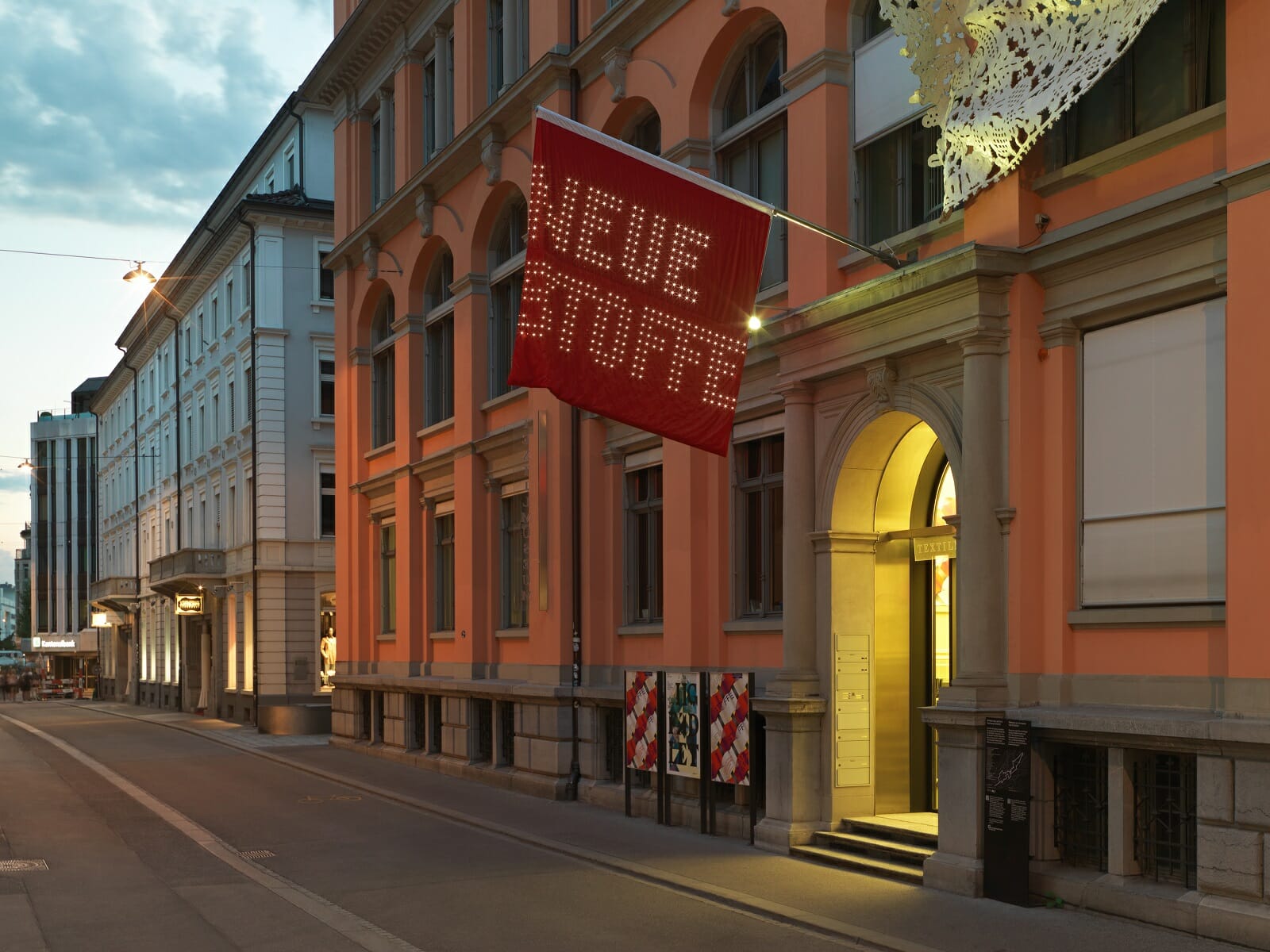 We introduce you to the Textilmuseum St.Gallen through an interview with Silvia Gross, head of communication for the museum, who tells us about its history, its permanent collection and the many institutional activities organised and promoted on its premises.

Why a Textile Museum in St. Gallen?

Eastern Switzerland was one of the most important textile centres in Europe in the second half of the 19th century. Particularly famous was the so-called St.Gallen lace, which is actually a machine embroidery that enjoyed great popularity worldwide, especially in haute couture

How was the Textile Museum born?

Inspired by the world fairs – technical and handicraft shows that arouse the enthusiasm of a large public from the mid-19th century onwards – the Kaufmännische Direktorium sets up the first sample collections for the region’s textile industry in 1863. In 1878 the ‘Industry and Trade Museum St. Gallen’ is founded. The museum opens in 1886 on the former site of the Seidenhof on Vadianstrasse in a palatial historicist building. On account of its red brick façade, the building, whose design is by Zurich architect Gustav Gull, is called the ‘Palazzo Rosso’, too. Besides the collections of the Kaufmännische Direktorium, it houses the Textile Library, the Drawing School, and, from 1890, the Embroidery School.

From 1900 onwards, temporary exhibitions increasingly take place, whereby the museum can fall back on important private collections and company archives that have come to the institutions throughout the decades. They supplement the original sample collections with valuable historical textiles, which once served the textile industrialists as a template for their own production and which today count among the museum collection’s highlights. As the years go by, the collection continues to grow. There is an increasing need for space and so the museum is extended upwards in 1956, which represents a massive alteration to the building’s appearance, as does the grey façade painted in 1962. In 1982 the museum is renamed, from the ‘Industry and Trade Museum’ to the ‘Textile Museum’ and the ‘Textile Library’. The latter is altered and extended in 1987/88. In 1991 the Textile Museum and the library are transferred to the ‘Stiftung IHK’. Since 2012 the Textile Museum St. Gallen has been run by the ‘Verein Textilmuseum’, which works closely with the ‘Stiftung Textilmuseum’, into which the ‘Stiftung IHK’ was merged in 2019.

In the early years, the museum served primarily as a training centre and template collection. Its purpose was to promote the local textile industry. Today, the Textile Museum sees itself as a centre of excellence that informs the general public about textile issues, with a particular focus on conveying the value of textiles in the age of fast fashion and encouraging visitors to adopt a sustainable approach to textiles and garments.

How is the permanent collection of the Museum composed?

The Textile Museum houses one of the most important collections of textiles in Switzerland. It encompasses historical embroidery, hand-worked lace, textiles from outside of Europe, historical fabrics and costumes from several centuries. Sample books, fashion photos and drawings expand the collection, which illustrates the multifaceted history of the Swiss textile industry, both embedded in the local region and connected internationally.

From 1863 the Kaufmännische Direktorium (Commercial Directorate), a forerunner of the Chamber of Industry and Trade, regularly purchases fabric samples from France, which are meant to serve as a model and inspiration for the regional textile industry. The sample collections are extended by purchases and gifts from important private collections as well as the absorption of company archives.

Today some 56,000 objects are stored in the Textile Museum depots. Besides the conservation and research into the holdings, an important focus of our work is on digitalisation of the collection. The objects are recorded in a database and made publicly accessible in a selection found in the Online Catalogue of the Textile Museum.

Impressive picture embroidery from the 14th to 16th century come from the Leopold Iklé and John Jacoby collections. Hand-made white embroidery as well as machine embroidered products trace the history of the embroidery industry of Eastern Switzerland in the 19th and 20th century. The objects could be absorbed into the Textile Museum through acceptance of selected company inventory, among other reasons.

A representative inventory of fabrics came to the Textile Museum from the collections of Friedrich Fischbach and the Schweizer Textilfachschule. The fragments tell the story of European silk weaving since the Middle Ages and right up to the 20th century.

Items of clothing and accessories spanning the 18th century to the present day illustrate the use of textiles and textile techniques and tell the history of fashion. To expand our collections, we are looking for women’s and men’s clothing from prominent designer labels, as well as garments that are demonstrably made from Swiss textiles.

The textile samples that were acquired by the Kaufmännische Direktorium from 1863 onwards were gathered together in the 20th century into sample books. Slowly, an impressive collection of these books evolved, which was added to by gifts. An important inventory of sample books came to the museum in 1983 from the estate of the company Fa. Grauer & Co.

The collection houses photographs of models from St. Gallen machine embroidery and Swiss fabrics from the 1920s to the 1990s. Also, it contains various drawings and illustrations, including the works of the Basel fashion illustrator Walter Niggli, for example.

Does the Museum host temporary exhibitions?

These days the Textile Museum manages an overall collection with around 56,000 objects. It hosts two to three special exhibitions every year, which complement thematically the permanent exhibition on the history of textiles in Eastern Switzerland. A highly varied event programme, museum-related educational activities.

How do you combine tradition and modernity?

We try to consider both aspects within our exhibition (= relate historic aspects to today’s discourse) and we try to set-up an exhibition programme which includes more historic topics as well as today’s design and fashion topics or social questions like Fast Fashion.

What are the other offers of the Museum?

We have a textile library, a public library with focus on textile and art topics and schools and family programmes as well as events for different target groups: guided tours, workshops, museum talks etc. The Museum has also a shop which offers traditional textile products from the region and Swiss design.

How important is the Museum for the territory and what is the link with the community?

The Textile Museum is quite important for the cultural identity of the region: today there is hardly any textile industry (once Switzerland’s leading industry) left, so we preserve the cultural heritage which used to form Eastern Switzerland and its society.

We offer programmes for different target groups, co-operate with other cultural and scientific organisation and we inform the broad public (people from the region as well as tourists) about the textile history of St.Gallen.

Who are the visitors?

Visitors are both individual visitors of the region and from other Swiss regions, tourists from Europe and world-wide, especially Asia and all grades and university students.