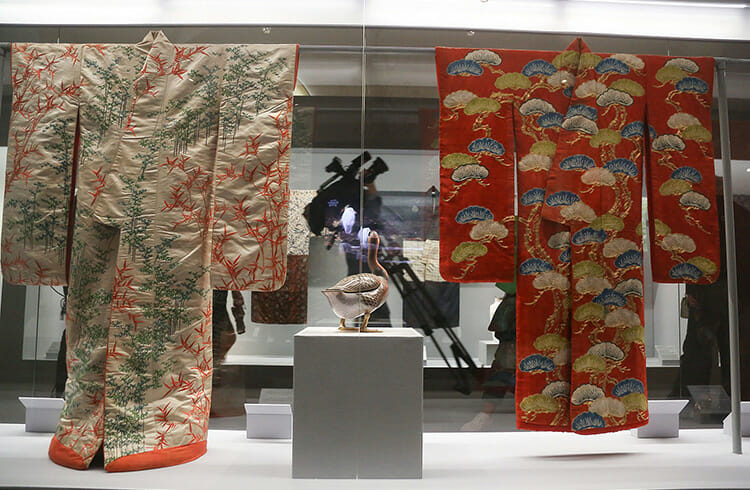 The Khalili Collection of kimono comprises more than 450 garments and spans three hundred years of Japanese textile artistry. It is one of the world’s most outstanding private collections of traditional Japanese kimono. The form of the T-shaped, straight-seamed, front- wrapping kimono has changed very little over the centuries, yet the Collection reveals an astonishing variety of designs. In Japanese dress it is the surface decoration, not the cut and construction, that is important and indications of gender, age, status, wealth and taste are expressed through the choice of colour and pattern.

Professor Nasser D. Khalili PhD KSS KCSS is a world-renowned scholar, collector and philanthropist, who has often been called the ‘cultural ambassador of Islam’ by Muslim leaders worldwide.

He was born in Iran in 1945, and after completing his schooling and national service there, moved to the United States in 1967, where he continued his education. He graduated in 1974 from Queens College, City University of New York, with a BA degree in Computer Science. Thereafter, in 1978 he moved to the United Kingdom, where he completed his PhD on Islamic Lacquer from the School of Oriental and African Studies (SOAS), University of London, in 1988.

These eight collections have been shown in more than 44 major museums worldwide. Furthermore, the Khalili Collections have been major contributors to more than 70 international exhibitions, such as the British Museum, London (1994), the Victoria and Albert Museum, London (1997), Somerset House, London (2004), the Alhambra Palace, Granada (2001), the Metropolitan Museum of Art, New York (2003,  the Van Gogh Museum, Amsterdam (2006), among many others. Also, The Arts of Islam. Treasures from the Nasser D. Khalili Collection was shown in 2007 at the Art Gallery of New South Wales, Sydney, in 2008 at the Emirates Palace, Abu Dhabi, in 2009 at the Institut du Monde Arabe, Paris, and in 2010 at De Nieuwe Kerk, Amsterdam, at the State Hermitage Museum, St Petersburg and at the Kremlin Museums, Moscow.

In addition to his cultural and educational interests, Professor Khalili is also a leading voice in the global movement to advance mutual respect and understanding among the nations of the world.