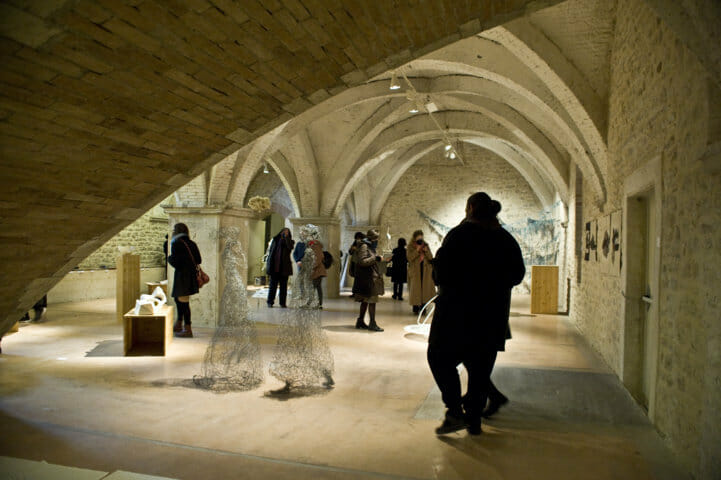 We visited the second edition of the Fiber Art Biennial in progress in Spoleto. The widespread exhibition (four host locations) offers a large number of works whose common denominator is the language that finds its expressive medium in the fibers and techniques related to them. By the will of the organizers and promoters, the Biennale wants to be a place to talk about art, an opportunity to promote the work of young artists and to give visibility to the research that is carried out within the Italian Academies of Fine Arts as well as a window open to textiles – materials and technologies – in contemporary art also thanks to the participation of established artists and artists who have been pursuing this research for some time.

The exhibition itinerary is seamless from site to site as there is no subdivision into categories (for example between teachers and students), a choice that places every single work on the same level.

The objective of this edition is admittedly a reflection on art through works that are heterogeneous in form and content that investigate urgent contemporary issues – from recycling to isolation due to lockdown – but also timeless social and existential themes. We have chosen a few to tell you about the diversity of what you will see, recommending that you visit it in person if possible.

Overview of the inauguration with the works of Anna Moro Lin on the left, a tribute to her career. Ph.credit Emanuela Duranti

This year’s career tribute is dedicated to a recently deceased artist, Anna Moro Lin (Rapallo, 1929 – Venice 2021), through two works from the Spazi allusivi cycle presented in 1987 at the Bevilacqua La Masa Gallery in Venice; two self-produced paper collages on gauze that proceed from tearing to the subsequent random recomposition of the fragments, restoring a new and different compositional ‘order’ to the initial form.

Among the many established artists participating is Silvia Beccaria (Turin, 1965): her multiple installation Posidonia, Lanternarie and Plumas de mar, part of the research project Lights at the bottom of the sea inspired by the creatures that live in the seabed and which thanks to the phenomenon of bioluminescence they appear different between dark and light, it reflects on the duplicity of human nature between interiority and exteriority, the ambiguity between what we show and what we hide, but it is also a representation of the visible and invisible of our being.

And Ilaria Margutti (Modena, 1971) with the triptych Le cose mute, part of the series Esercizi di vastità, entirely hand-embroidered canvases on which the artist has applied a machine-made lace based on a free design that lead to reflect on the practice of slow time embroidery and how much this amplifies the perception of ourselves, bringing us closer to the slow time of nature, to the silence and the beat of life marked by the rhythmic passage of the thread.

Equally interesting are the two choral projects of the Australian artist Virginia Ryan, born in 1956: the first, Female Terremotus (second among the interventions in Italy of the Intransitu project started in 2007), was created in collaboration with the sound designer Steve Feld and with a group of women from the Spanish Quarters in Naples as part of the artist’s research concerning memory, identity and territory and who here gave shape to their perception of the 1980 earthquake.The result is a work consisting of 10 sewn and embroidered pieces completed within 6 months and presented on the anniversary of the date of the earthquake. The second, Nascita project, is an installation subsequently conceived with a group of embroiderers from Foligno who for months, every Friday, met to embroider a strip of fabric 7 meters long and 40 centimeters high like the cloth that until the years’ 50 wrapped babies, a symbol of care for new life and ancestral female occupations; a work that reflects on the meaning of the word nascita (birth) and the meaning that each of them attributed to it at that time.

The installation by Bahar Hamzehpour (Tehran, 1980) Women and war is deeply evocative, 12 elements of over one meter made of Hanji paper, fragile and resistant like a skin, on gauze through which she gives a voice to the women of her country, silent witnesses of the eight years of war between Iran and Iraq, that she sought and whose stories she listened.

Tapestries that become sculptures conquering a totemic three-dimensionality those of Cristina Mariani (Monza 1982): Body of work is an installation conceived during the first lockdown 2020 that investigates the condition of our disintegrated and digitized bodies, excluded from any relationship with each other and relegated to the digital dimension in order to protect them. Each tapestry is a fragment of a body whose pattern refers to electronic circuits and the shapes of insects.

The body is also the inspiration for the work in shantung silk and silk organza by Manuela Toselli (Turin, 1971), Thin skin, a metaphor for that epidermis which, growing back on the lacerations, protects the exposed part. Each wound is a traumatic event that brings with it a change of which the body keeps traces, a map of our physical and spiritual evolution.

Was war, on the other hand, is the installation by Esther Weber (Switzerland 1972) which questions what remains within us of our life – experiences, emotions, feelings – over time and what form these fragments of life take. The work is a collection of works created in recent years that the artist has compacted and compressed into small wooden bowls, each of which is a limit and point, and contains a specific moment of his artistic path connected with the others in a wider space-path always in progress.

Among the particularly interesting projects attributable to the Academies are the works of the students (and former students) nominated by Vanna Romualdi, professor of Decoration at the Biennium Specialized in Decoration for Architecture at the Academy of Fine Arts in Bologna.   Among these, Hybrids, the installation by Elham M.Aghili (Sassuolo, 1989) with the sound intervention by Khorshid Pouyan inspired by the ancient Orto dei Semplici by Ulisse Aldrovandi where new plant hybrids made of woolen thread borrow the shapes from that that ancient floral heritage mixing in combinations that are as visionary as they are realistic in detail and combined with immersive sounds taken from the current botanical garden of Bologna.  A reflection between wild and domesticated that the artist also proposes in a second intervention, Thi(sea)se di(sea)se, whose fulcrum is a seabed inhabited by textile creatures with the same ambiguity. Have in hand by Songy Du evokes the desire for a relationship with the other from oneself: a physical closeness that is as difficult to achieve as the embroidery on the many plaster hands that emerge from the white of the wall. The sense of strangeness and bewilderment is also the theme of Nikola Filipovic‘s The Theory of Youth, a metaphor of confinement that forces one to have a forced relationship with oneself imprisoned in the home.

There are numerous and interesting works by teachers and students of Italian academies who have joined the project Cuttings of the author using textile waste from local companies to create their works.

For example, the work of Mattia Barone (Cantù 1994), Academy of Fine Arts of Carrara, similar to a Xoanon – the primitive ritual idols that were covered with pieces of cloth, ointments and ashes – which seems to emerge from an archaeological excavation. An idol with legs that anchor it to the real world and a body of layers of fabrics and concrete, a contemporary version of an ancient rite forever crystallized in an artistic gesture now devoid of its original meaning.

Or the asphyxiated installation by Flavia Spasari (Chiaravalle Centrale 2000) of the Academy of Carrara, Asphyxia, in which the fabric trapped in the concrete is unable to come into contact with the earth: an impossibility of breathing that lends itself to multiple interpretations. And again the work of Flaminia Cicerchia (Rome 1995) of the Academy of Fine Arts in Rome, who attributes the thermal qualities of cashmere as a material that retains heat, the ability to preserve memory.The artist used the textile fragment to absorb a fragment of a photograph found near a dumpster together with other personal objects of a man, serial number 015146 and modeling an element of the same photograph in clay giving it a physical space, the corner, place marginal yet charged with tension as a point of contact between two walls.A work that is the appropriation of someone else’s memory that becomes a fragment of human experience that can be reshaped, a trace in which an existence that has been and has dissolved is condensed. Also from the Academy of Fine Arts in Rome, Andrea Guerra (Urbino 1993) created an embroidered canvas that reflects on the concept of bridge as a passage, connection, crossing, represented here in a geometric synthesis reflected on the surface of the water with reference to bridges of the devil so perfect as to suggest a non-diabolical intervention.The reflection of the structure in the hypothetical mirror of water creates a circle that is instead a divine symbol but also a threshold, a meeting point between tangible and immaterial reality.

Ornella Rovera (Turin, 1961), professor at the Academy of Fine Arts in Turin, is also looking for points of connection with Sinapsi, capable of stabilizing tensions and differences.

Conversion is instead the fulcrum of Pensum by Lucia Bonomo (Marostica 1989), Brera Academy of Fine Arts, where a structure determined by will is obtained from the shapeless chaos of the raw material through a spinning process.

These are just some of the works that contribute to making this edition of the Biennale Fiber Art in Spoleto an overview of the evolution of this language of contemporary art over a period of time that spans the last decades and that looks to the future through the experimentation of new generations.