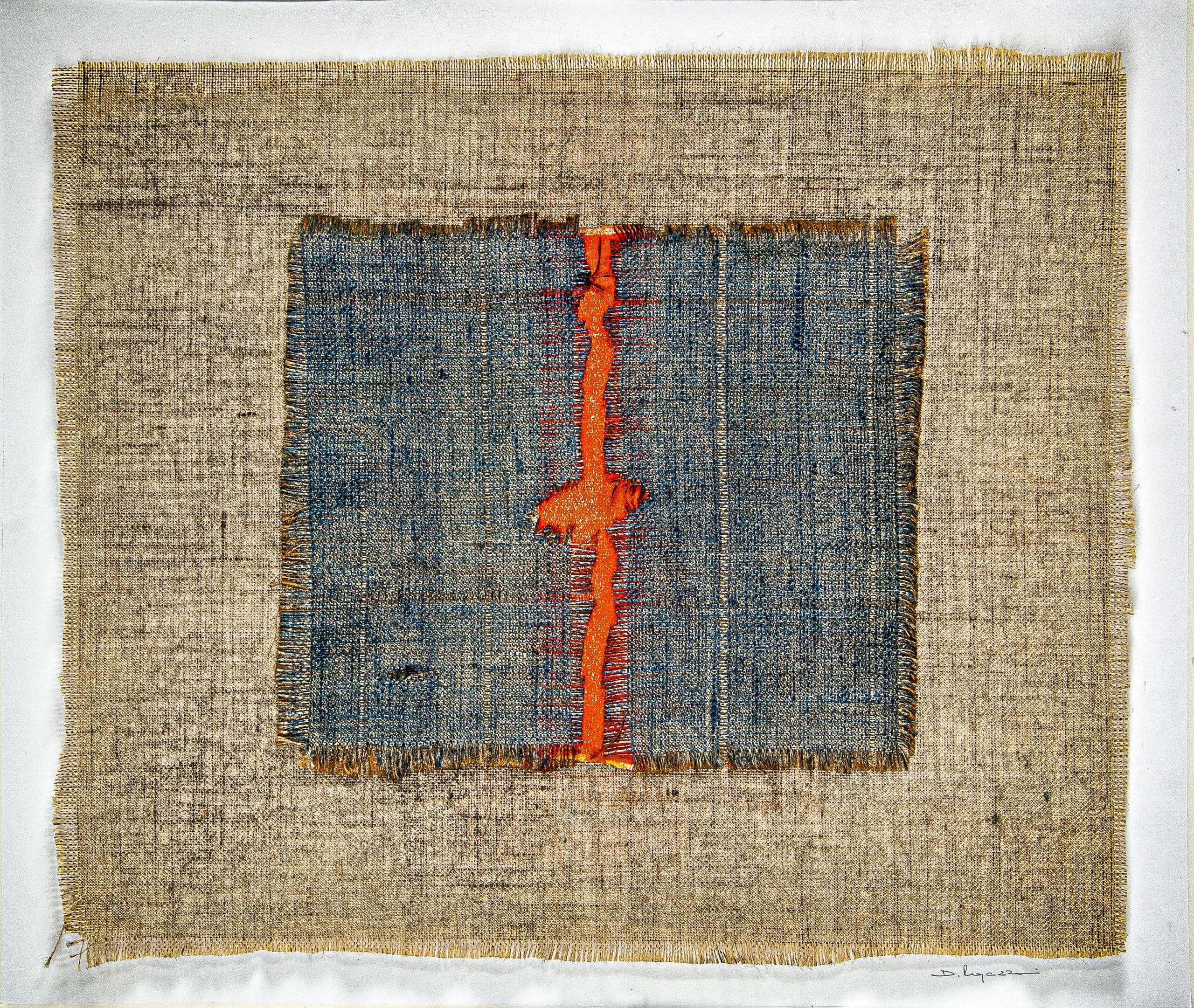 At the first edition of the contemporary art fair Roma Arte in Nuvola, the Milanese gallery Artespressione by Paula Nora Seegy presents a selection of works by Domenica Regazzoni, a multifaceted and multiform Lombard artist who began painting in the early seventies, abandoning the figurative since the nineties in favor of a more abstract and formal setting.

Moved by an interest in the search for the intimate affinities that link color and matter, sound and word (S. Evangelisti, Haiku, Silvana Editoriale, 2021), she expresses herself in different artistic techniques from collage to material painting, from sculpture to engraving, alternating between the use of the hardest and most difficult to the most delicate materials. Coming from  a family tradition that has always had ties with the world of textiles (her grandfather and uncle were tailors, her father, before becoming a famous luthier, was employed as a velvet selector at the Redaelli Vellutificio in Mandello), she was always fascinated by the textures and all kinds of fabrics in which her everyday life seemed to be wrapped:”(…) I remember that as a child, at the baker, at the grocer, everything was kept in those jute bags that reminded me of the one with which Santa Claus transported gifts and I have always kept the impression of a solid and precious wrapping of that material at the same time, how precious the content it held must have been. That rough and tough texture instilled in me a sense of protection”says Domenica.

Regazzoni’s material works are therefore characterized by the use of textile materials such as cotton canvases, jute, gauze which, in some cases, form part of the work itself (such as the series of works inspired by the songs by Lucio Dalla) and, in others, the matrix of precious monotype engravings.

From the point of view of the recovery and “rehabilitation of waste”, the excess material of the production process of the material works is preserved and acquires new dignity becoming, at a later time, the basis for the creation of new compositions.

As in the phase that saw her composing sculptures dedicated to music thanks to the recovery and assembly of violin processing scraps from her father Dante’s workshop, Domenica preserves every shred, every piece of fabric used for her material paintings, placing it at rest waiting for new inspiration that will give back to the “waste” a new dignity as a work of art.

In monoprint engravings for example, in place of the traditional zinc or copper plates engraved with chisel and burin, Domenica Regazzoni realizes the matrices by assembling pieces of fabric, jute, gauze or the same tarlatan with which the plates are cleaned, experimenting and playing with the chalcographic techniques and contradicting their vocation for infinite reproducibility in terms, creating unique pieces that, once released from the press, are further enriched by post-works, sheet by sheet, thanks to the experience gained in the study of the famous Milanese engraver Giorgio Upiglio.

In addition to the engravings, fragments of fabrics are assembled in that series of her works that Gillo Dorfles has defined “… refined polymaterial collages and minute but sensitive interpretations of the ancient Japanese Haiku”, an ancient Japanese literary tradition in the name of the synthesis that Regazzoni herself defines:“A handful of words and colors in which the foundation is not what is said, but what is not said. As in Kintsuji, the ancient Japanese art of repairing “shards”, the short Japanese poems helped me to collect fragments of my works and put them back together into new emotions”

Domenica Regazzoni (Bellano, Lecco, 1953) began painting in the early 1970s. From her interest in the different artistic languages ​​that link gesture and matter, music and poetry, the exhibitions “Colore Incanto”, inspired by the music of Mogol, and “Regazzoni & Dalla”, in collaboration with Lucio Dalla, are born. In 2003 she approaches sculpture with a series of works inspired by violin making, of which her father was a well-known professional, and since 2007 she has dedicated herself to engraving. She exhibits in Italy and abroad (Tokyo, Kyoto, Shanghai). She has made sculptures for the cities of Barzio and Segrate in Italy, and Bucharest abroad, some of her works are kept in various public and private collections.