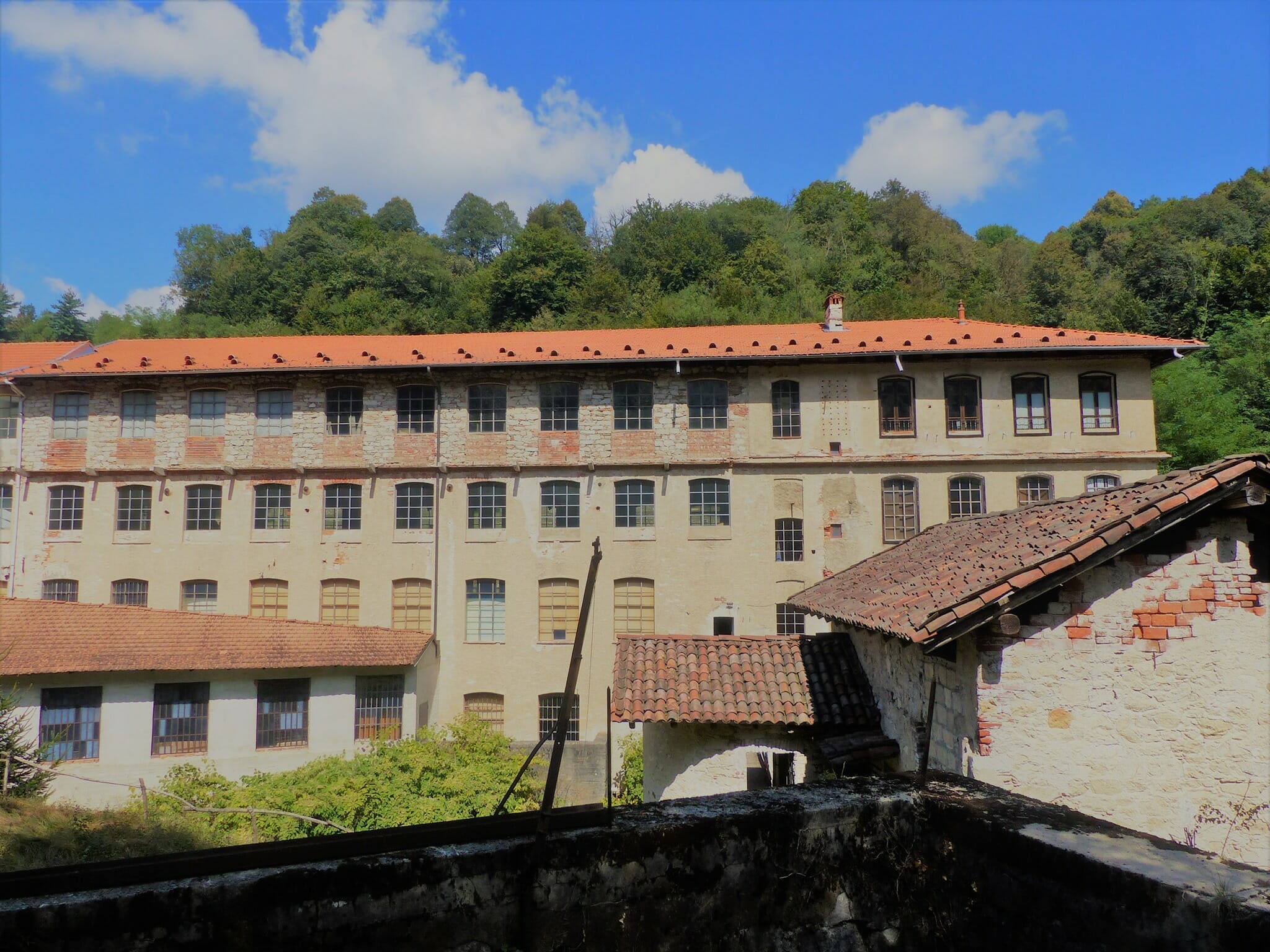 In Piemonte, Biella and its territory, which can be better described as the “woolen region of Biella”, is still one of the greatest centres of the World woollen Industry. It is an old tradition that has its roots at first in the handmade medieval production and, from the XVII century, in workshops, which, during the first industrial period have evolved into factories, transforming Biella into the Italian Manchester for what concerns the quality and the amount of the products. It is an old tradition that has established itself after centuries of hard work, business skills, ability to innovate, research, trade union struggles and – last but not least – around great dynasties, by deeply establishing its roots in the culture and history of this specific borderline area of Piemonte. It is a pre – alpine land low in crops but suitable to sheep breeding and, thanks to the abundance of the creek, suitable to the production of the motive power, the region of Biella has transformed these peculiarities in a brand known all over the world.

The DocBi, the biellese centre of studies, is the keeper of this history and territory, by conserving a conspicuous historical and archaeological industrial heritage, making it available for the consultation of academics, university students and followers, and usable for a wide public and future generations.

“The Wheel Factory“ is a building which has hosted the wool mill Fratelli Zignone since 1878 till its end in 1964. After having been abandoned for decades, the creation of the DocBi (which has taken care of its renovation) and the donation of the previous owner Carlo Beretta, have determined in 1992 its rebirth as a cultural centre. Nowadays, the industrial complex is a container that stores all the traces of the activities that were carried out here and its history as well (including the oil spots on the ceiling which indicated the position of the looms on the top floor) which is part of the “Rete Ecomuseale“ of Biella’s area.

Over time, the Factory has become a dynamic and vital centre with a strong bond with the territory constantly renewed through temporary exhibition projects, conference and school educational visits. Moreover, in the last year, the attention has even been focused on the contemporary Fiber Art, through the establishment of a show, last summer, which took place in its halls and according to a planning (if it will be possible during the current pandemic) of a wider project for 2021.

Apart from the archive, the Factory hosts a permanent museum collection which develops through a path based on two floors (basement and ground floor) where visitors can access to the ancient productive spaces where dozens of workers worked and discover, through old textile machines, the production cycle of wool and a specific transmission system which is based on the production process and the transport of the motive power whose origin is exclusively hydraulic used till the discovery of electricity.

Nowadays, the machines re-establish the mechanical and textile features which represent a fundamental characteristic of the “industrial archaeology“. These machines are mostly mechanisms born to be activated manually and, later on, electrified by the application of an engine.

DocBi – The Studies Centre in Biella and the Politecnico (Turin) have also planned an industrial archaeological tour called “the Wool Path”, focused on the Wheel Factory, which connects the city of Biella and Borgosesia. The path’s objective is let the public discover the architectural manufacturing heritage of Biella’s territory (XIX and XX’s century) through valleys and communities, a path of 50 km of length in order to discover woollen mills and the territorial and social systems linked to them. This experience starts from the tracks through the woods created by the workers to reach their work place, goes on with the hydraulic works produced by creeks in order to bring water to factories and power stations, up to the most modern urban measures as the houses of the workers villages, the boarding schools, the kindergartens, leisure complex, the Zegna centre of Trivero.

Concerning this project, the DocBi has decided that its goal would be to allow the public to access even to the first floor, where in 2019 was located the scale model of the “Wool Manufacture“ of Borgosesia (realized in the Rossi company in Milan, offered to the DocBi by Giulio Zegna Baruffa in 2004). Once completed the technical restoration intervention organized by Bruno Cremona, Alfonso Oitana and Enzo Vercella and the pictorial renewal carried out by Camilla Fracassi, we’re waiting for an opening date, if the restrictions due to the pandemic will allow it.

Scale model of the Wool Manufacture of Borgosesia

The “Wheel Factory“ is located at Pray (Biella) and it is accessible to the public all summer Sundays and for the rest of the year everyday upon reservation for groups. The access for researchers, university students and academics to the Centre of Documentation of the Textile Factory is possible by appointment.