Threads of Consciousness: The Tapestries of Jon Eric Riis 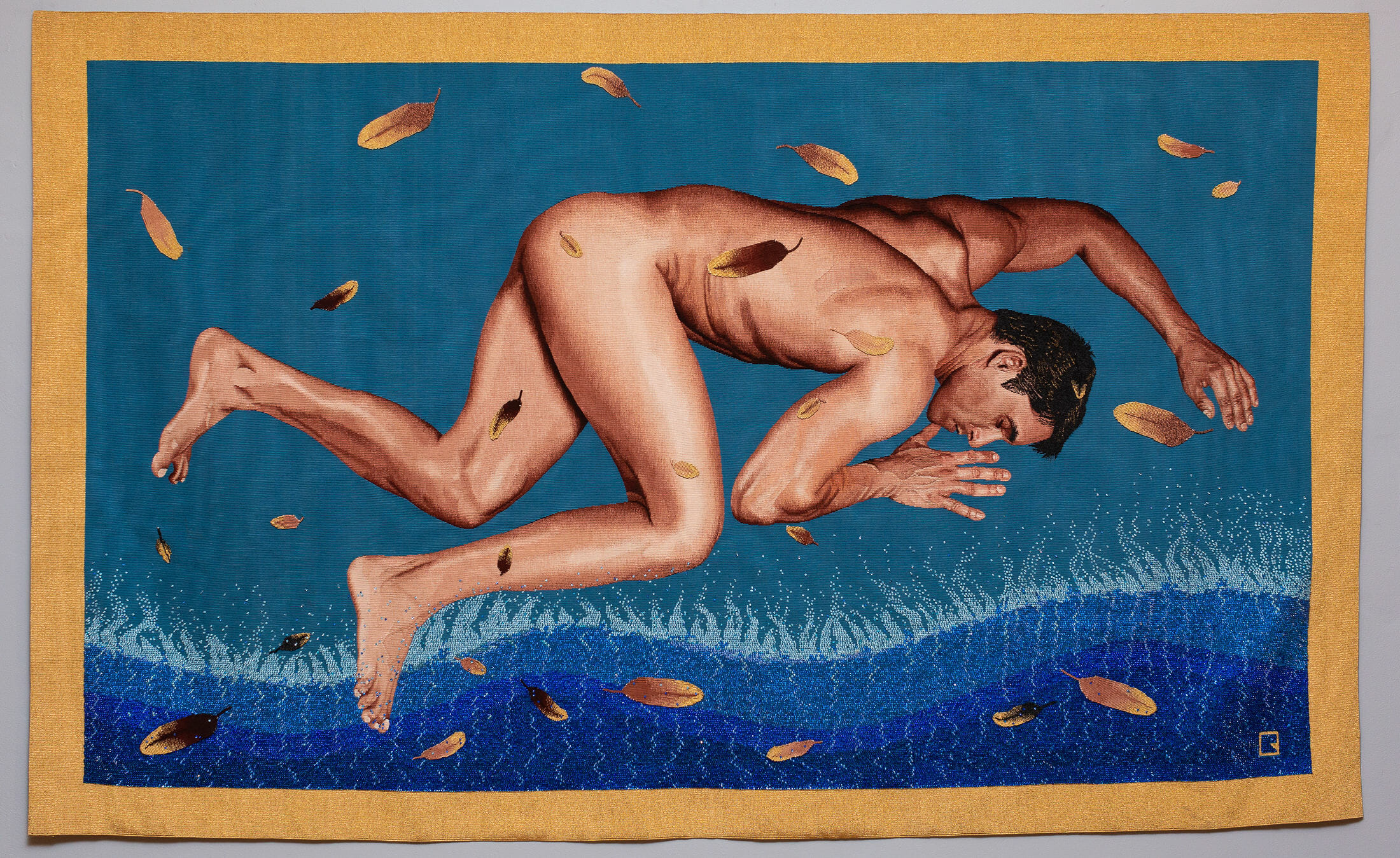 The Morris Museum presents an exhibition of works by contemporary tapestry artist Jon Eric Riis (b. 1945, United States). Active for nearly six decades, Riis is celebrated for his intricately handwoven, representational textiles that strike a balance between social commentary and virtuoso craftsmanship. Art, history, world cultures, and topical issues serve as inspiration to address provocative subjects—such as race, religion, war, beauty, spirituality, humanity—through the medium of woven silk and metallic thread. Often they are embellished with freshwater pearls, gemstone and gilt glass beads, and crystals. Dating from 2000-2020, the 58 works on view include large mythological tapestry panels, Riis’s signature coat and robe archetypal forms, and experimental anatomical tapestry strips, making this the largest presentation of the artist’s work in the U.S. and his first solo museum exhibition in the Northeast.

“Jon Eric Riis turns the age-old art of tapestry on its head, bringing it into the present by exploring contemporary issues and personal narratives”, said Ronald T. Labaco, the Morris Museum’s Chief Curator. “Traditionally, tapestries and other woven luxury textiles were commissioned by the wealthy and powerful, not only as magnificent works of art but also to uphold and communicate their privileged status. They would engage a prominent artist to devise the imagery, which would then be executed by skilled weavers to exact specifications. By contrast, as a contemporary artist Riis conceives of the content, creates the design, and weaves the tapestry entirely himself. These works serve as an extension of his thoughts, values, and internal dialogues—the threads of his consciousness—sublime in concept and execution.”

Riis weaves each piece on customized horizontal looms, ranging from 2 to 10 feet tall, that he has owned since the early 1970s. Depending on the particular tapestry, he may assemble together multiple smaller elements to create a larger composition. Riis first gained recognition for his woven work as a college student in the mid-1960s at the onset of the fiber arts movement. After teaching at the University of Illinois, Champaign-Urbana, he accepted a position as head of the Crafts program at Georgia State University in Atlanta, where he established his studio. Early success came from commissions for public spaces by modernist interior designers and architects from the southeast, such as John C. Portman, Jr., who favored abstractionist weavings. In the early 1990s Riis made a decisive break from abstraction and transitioned to figurative imagery with strong visual references to the real world, celebrating tapestry’s rich tradition of pictorial narrative. These social and cultural investigations distinguish his approach from other practitioners of this genre today. “My more recent tapestries question the issues dealing with the quality of life in the States,” stated Jon Eric Riis. “Especially in the areas of education, racial and religious inequalities, and our declining political standing in the world.”

Born in Park Ridge, Illinois in 1945, Jon Eric Riis is a tapestry artist living and working in Atlanta, GA. He earned his Bachelor of Fine Arts from School of the Art Institute of Chicago, IL in 1967; his Master of Fine Arts from Cranbrook Academy of Art, Bloomfield Hills, MI in 1969; and a Fulbright Grant to study at Viswa Bharati University, Santiniketan, West Bengal, India in 1970. Riis’s work has been widely exhibited in museums and galleries in the U.S., Europe, and Asia. His work is in the permanent collections of Art Institute of Chicago, IL; Cleveland Museum of Art, OH; Columbia Museum of Art, SC; High Museum of Art, Atlanta, GA; Indianapolis Museum of Art, IN; Metropolitan Museum of Art, New York; Minneapolis Institute of Arts, MN; Museum of Arts and Design, New York; Renwick Gallery, Smithsonian American Art Museum, Washington, D.C.; Southwest School of Art and Craft, San Antonio, TX; Yale University Art Gallery, New Haven, CT; and numerous private collections.