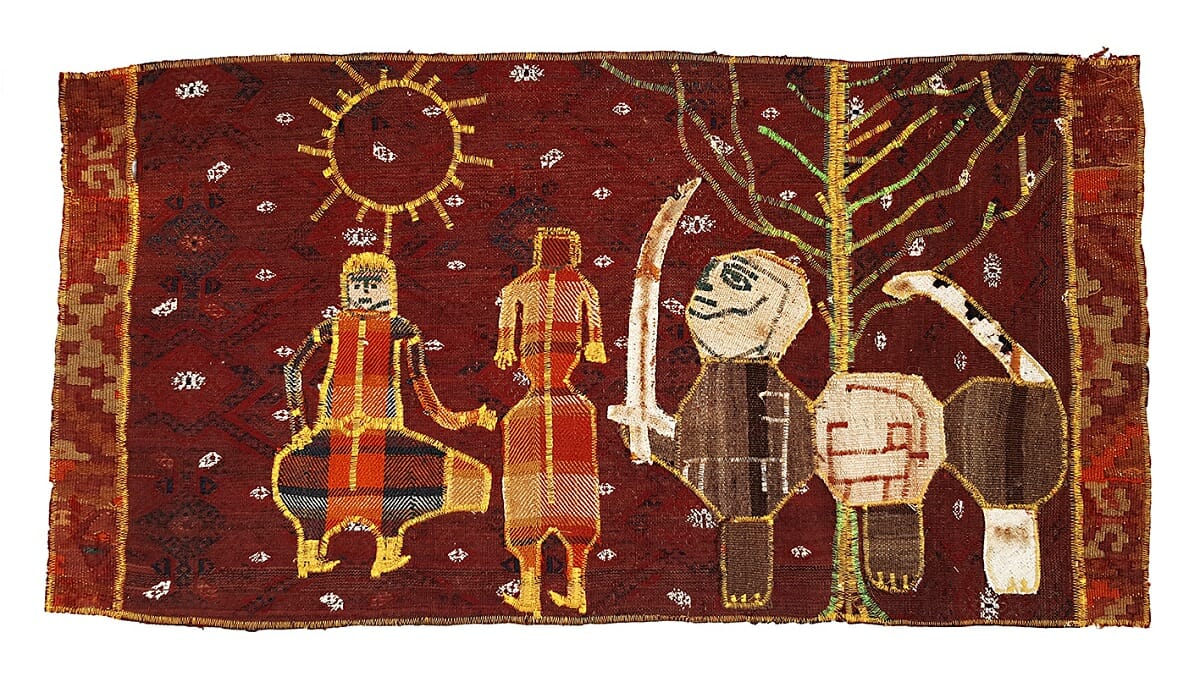 CC, stage name of Alireza Asbahi, was born in 1969 in the district of Emamzadeh Hassan, Tehran, into a rather large family. He attended school until the fifth grade, when his father died leaving him the responsibility of head of the family. Following in the footsteps of his parent who was a tailor, CC becomes a worker in a clothing manufacturing company in the Salsabil / Jumhori district.His passion for textiles and crafts led him to the carpet bazaar in search of original artifacts and kilims that he began to collect and later market at the Jome Bazaar, until in 2019 the latter was closed and forbidden to sellers. In the meantime, however, he had bought a special sewing machine to repair old torn rugs and began to experiment with a technique similar to patchwork. The first results do not satisfy him: the machine does not work as he would like and furthermore, obtaining the fundamental means for his artistic research work is beyond his possibilities. Meanwhile, he begins to work on handiworks that draw on the traditional iconography of the Lion and the Sun, investigating their aesthetics and symbolism intertwined with Iranian history since the pre-Islamic era. These new works, in 2019, come to the attention of Morteza Zahedi, founder of the Outsider Inn Gallery in Tehran, the first and only Iranian gallery specializing in Art Brut which becomes the international reference for the artist’s work thanks also to the collaboration with the New Yorker Cavin Morris Gallery.

CC’s work starts from the search for old carpets and kilims that are no longer usable, torn or damaged after washing or that can no longer be repaired: on these bases he intervenes by cutting and sewing various textile fragments, creating works halfway between outsider art and the reinterpretation of popular and traditional themes of carpets through contemporary aesthetics and conceptual contents. Decorative themes of by now faded and worn semantics acquire in his works a present-day figure that does not exclude the cultural roots on which he feeds but builds a bridge between the present and the future.

In his works, a praise of the transformation that in upcycling from the ethnic to the ethical, from the handicraft to the work of art, opens the reflection on change and on the value of possibility: the possibility of choosing where we go – which does not erase from where we come from – and what we want to become – that does not erase who we are and who we have been. In the creative alchemy of his works, the layering of different fragments of fabric refers to the multiform richness that different experiences confer on each story – individual, collective, universal – and that the ability to ‘sew’ them together (and re-sew them), giving value and space to each of them, can transform into a work of art.