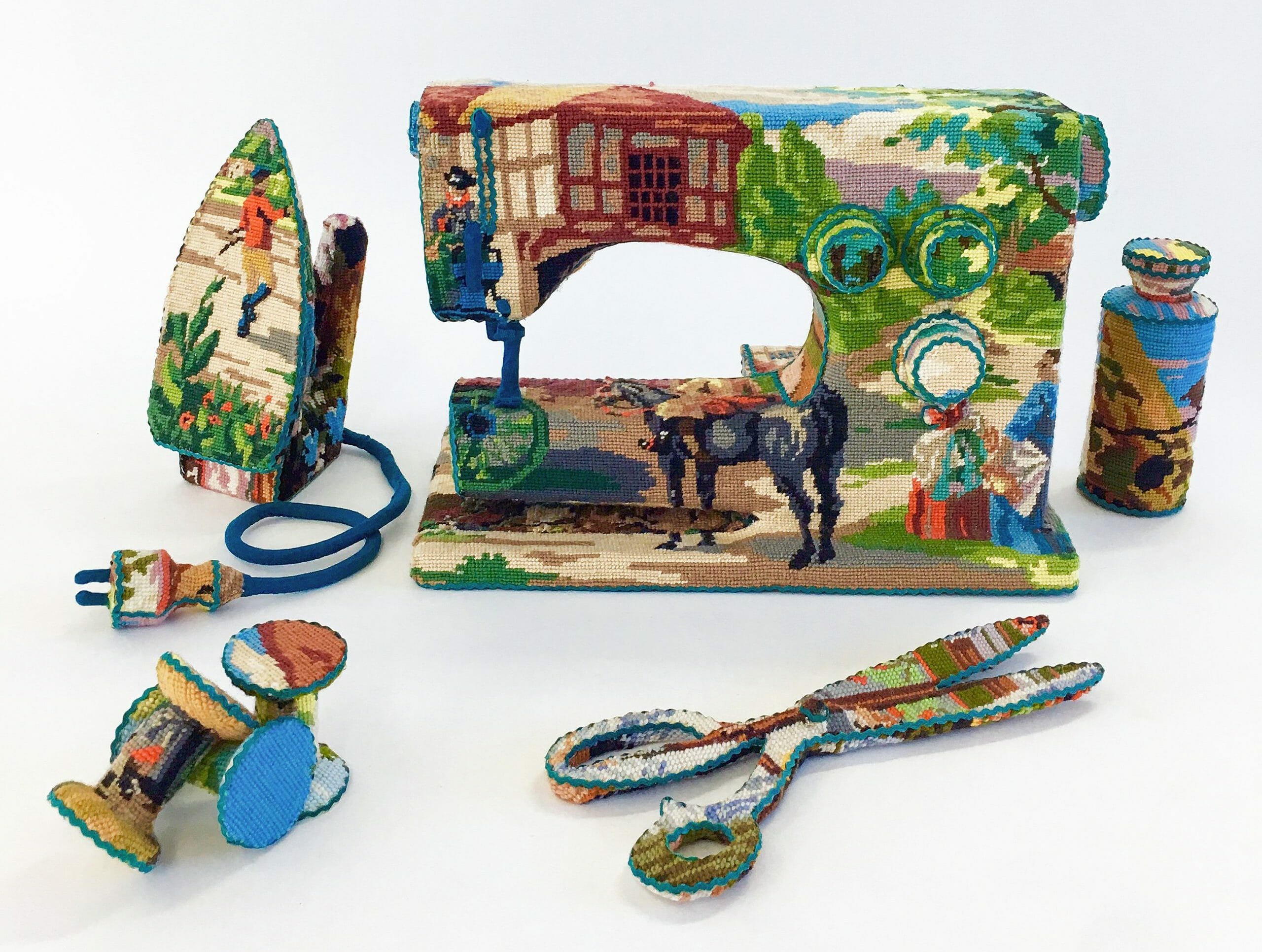 Ulla-Stina Wikander was born in Gothenburg, Sweden, in 1957 and graduated in painting and sculpture at the Högskolan för design och konsthantverk in Gothenburg and later at the Hovedskous Målarskola in the same city.

Using obsolete objects and old embroidery, Wikander creates disconcerting artworks. She surprises the observer, letting him waver between uncertainty about what he is looking at and the familiarity of the shapes and embroideries that cover the objects, creating a dichotomy between the reality we believe in recognising and the one revealed by the artist’s intervention.

Through meticulous work of cutting and stitching, in a game of the absurd that assembles discordant elements, the artist generates an anomaly that raises questions as much as it provokes reflection.

Wikander worked as a stage designer at the Gothenburg Opera House. While visiting flea markets in search of objects for the various performances of the opera, she discovered embroidery and began a collection. About 15 years ago, she ended up with many old cross-stitch embroideries without a clear idea of what to do with them. At first, she covered some mirrors and the seats of a few chairs, although she did not find this an exciting result. Then – finally – her old hoover broke down, and, not wanting to throw it away, she had the idea of trying to ‘dress’ with cross-stitch, something unusual and unexpected, like her hoover.

Since that first experiment, she has never stopped re-interpreting vintage objects through this practice, choosing them from ordinary, everyday items from the 1970s, buying old household items, small appliances, tools and utensils and even sports equipment. She selects the embroideries with care, starting with the ones she prefers and considers the most beautiful or the best match for the object’s shape. The motifs must be meticulously matched, giving the work a harmonious aesthetic coherence. Large installations allow her to place embroideries, or parts of embroideries, that she does not consider excellent in less visible places.

When I ask her which works she is most fond of; she tells me that one of her favourites is “‘The Pastry’, an installation I made a few years ago about women’s unpaid work in the household and the kitchen. It consists of beautiful floral embroidery and pretty objects from the 1970s. Also, “The Swan chair” and “I am Sorry” are among the ones I love the most.”

Concerning her work’s more significant technical challenges, she says: “It is always difficult for me to choose the right embroidery and cut it out. I sometimes doubt whether I have chosen the wrong object for the embroidery I am cutting and therefore have the unpleasant feeling that I am irreparably destroying something beautiful. At the same time, the certainty of its proper placement falters.”

Her work has been shown in national and international solo exhibitions – most recently at Göteborgs Konstförening, Karlskoga Konsthall, Kaleido in Uppsala, Paradigm Gallery + Studio in Philadelphia and Mobilia Gallery in Cambridge, MA, in the USA. She has participated in group exhibitions in galleries and museum spaces in Sydney, New York, Portland, Philadelphia, Basel, Helmond and Gothenburg, to name a few.