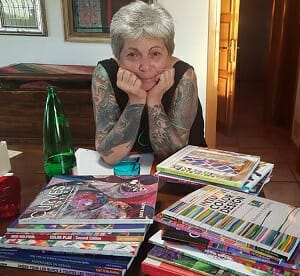 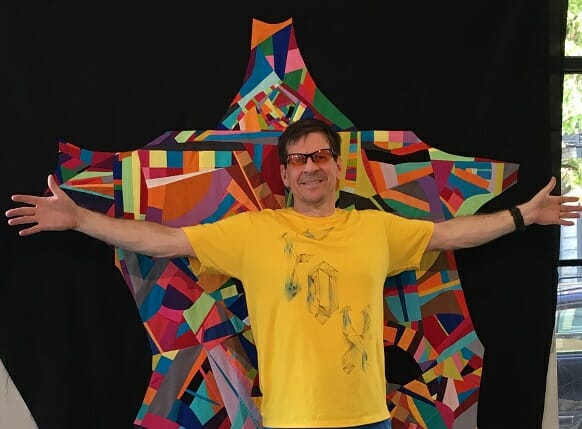 Ken Smith is an American artist who lives in Vermont, a confederate state of the United States located in the New England region, with humid and temperate summers and harsh winters, with intense cold and frequent and abundant snowfalls.

Ken has a multifaceted artistic personality, as evidenced by his varied interests, centered essentially on the creation of improv pieces, realized using mainly plain-colored fabrics and threads, so far almost always completed without assembly and quilting, but which also span the design and the photography, intended as a graphic reworking of photos that often take inspiration from his drawings or improv works.

Following his photos on Instagram (the first dates back to 2014 but starts to post regularly from February 2016) you can catch the fast artistic growth … follow the chronology makes us participate in his journey, the enthusiasm that permeates him when he starts to work on his pieces (“doodle” as he calls the daily productions).

Some pieces grow beyond the wanted … .Ken leaves them on standby and resumes them even after months, especially those that provide more time to be completed.

In him strikes the continuous search for improvement:

day after day he puts himself to the test … and reaches a new goal!

Starting from December 2017, the drawings become real studies of composition with the use of repetition of the blocks through the use of retouching programs such as photoshop.

The pieces that satisfy him the most, which he considers finished, all have a name.

In 2018 enters the full of his creative phase, every day a new piece is added to the previous ones and each one is characterized differently.

He participates several times in the challenges proposed by the magazine Curated Quilts, this time also completing the quilting of his pieces (not necessarily after having stuffed them: sometimes the only top is quilted only to define it better or to add details); some of his pieces were then published by the magazine.

In the course of the year he published several very accurate geometric drawings and digital reworkings of photos: drawings, photos, textile works intersect and are continually influenced … thanks to his generosity of sharing who observes him on instagram can almost grasp the swarm of his creative mind!

In the summer of 2018 he began to dedicate time also to Thread Painting … .and, as usual, he threw himself headlong, reproducing his house (designed in the ’40s by Arthur Keyes); The piece, called “Our House”, measures 16 inches, and was published in the month of January on the Facebook page of Alex Veronelli.

In August 2018, he held his first solo exhibition in Rutland (Vermont) at the Castleton University Art Galleries, where he exhibited a hundred pieces of different sizes (films of the event are visible on his Instagram profile).

Few are the finished pieces. It takes too much time, time is precious … the mind is ready before the hands and then off to a new improv!

The pieces will end, maybe for the next Mercury Retrograde, a period in which you can only complete the works already started.

( Note: choosing photos for the article was a difficult task…with more than 1300 posts on his page Instagram Ken Smith shared day by day his production…the 30 photos of the article give only one idea!)

I asked Ken Smith some questions:

Can you tell us why Ken Smith is “TheKingslacker” and what motivated you to get closer to textile art?

My nickname “TheKingSlacker” is an antiphras I gave to myself.

The nickname also allows people to find me much more easily on the internet because my real name (Ken Smith) is widespread.

I started my artistic career in December 2015 to spend more time with my wife, with whom I have been married for over 20 years, Kelley McCrory.

Kelley is an established textile designer and artist and has a very well organized studio in our large Mid-Century house in Rutland, Vermont. The studio’s layout  gave me  the opportunity to work in a space dedicated to textile art with excellent equipment. And with her skills, Kelley was able to guide me in learning sewing techniques and  thus to facilitate and accelerate my growth quickly.

In December 2015 I started by methodically exploring the themes proposed by Sherri Lynn Wood in his book “Improv Handbook for Modern Quilters”, photographing day after day the progress achieved and from July 2016 I started to use Kona Cotton Solids for my work.

In 2016 I started experimenting with various sewing techniques: half square, prospective studies, making my works evolve following the variations that gradually came to my mind.

How would you describe your being an artist?

I’m constantly driven to create art as a relief from the stress of my very tiring and demanding daily work in the field of Information Technology. For my creations I usually use bright and contrasting colors that do not necessarily follow the “rules” of the color wheel or the theory of color but that I approach freely according to the mood of the moment.

I am an improv artist: every day I choose the colors to work with, I start from an idea, I try, I modify until I am satisfied with the result achieved; I have done studies on the repeated use of some forms; I explore the use of bright and contrasting colors in abstract space using fabric and thread as my tools.

I have thought a lot about the difference between art and craftsmanship. Also how much my time is worth and what are my current goals with my art. For example, I define myself as an artist, a fiber artist but not a quilter because I don’t want to be labelled in a category. I’m not a quilter because I’m not following schemes or using kits.

Actually I’m really proud to say that all my pieces are not functional, they exist purely for their beauty and artistic value.

Why are there so many pieces in your production that are “just” tops?

I started doing just tops because I didn’t feel like quilting too. Also, having a limited time for sewing, doing only tops makes me faster and more rewarding. Often others suggest me to make someone else do the quilting, but the problem is that the quilter has to be paid and, since I do not sell my pieces for now, I can not afford to hire a quilter. I also think that some pieces do not need quilting nor that quilting would add to them artistic value.

Do you follow your own method of working or are you “improv” in this too?

My art is generally created from a basic idea that I have in my head and evolves as it is converted into the physical world. The evolution of a piece is sometimes influenced by what is happening around me, by the news of what is happening in the world or just by how I feel at that moment.

I’m influenced by the artists Wassily Kandinsky, Bridget Riley, Kenneth Noland and Sonia Delaunay. My art is also influenced by modern architecture and the symmetries that occur in nature.

Sometimes I first draw some pieces on paper and only when I am satisfied with the result do I begin to process them with the cloth.

I put some works aside and resume them after months, especially those that require more time to be completed…

I prefer the small pieces that I make in a few evenings, but I do not abandon the complex works … I delay them.

Sometimes I first draw (or paint) what I have in mind and then I make it with fabrics.

Some of my pieces are created by sewing together randomly woven fabrics and letting the piece evolve. I call this process SST (Sewing Stuff Together or ironically: Slapping Sh * t Together).

One of my favorite pieces is called “Love & Loss” and was created using the SST process. This piece took more than 50 hours to complete.

I tend to create small pieces, because larger pieces require a lot of time and energy to create, which can make it difficult to finish them.

Your Instagram profile periodically shows photos of your participation in the “Men’s Quilt Retreat”, what is it about?

. The retreat is great collection of guys with various skills, experiences, and styles of quilting.   I’ve attended 3 of the quilt retreats which has been held at Fullerton Inn in Chester VT.  Having it at the Inn is wonderful as the cost of retreat includes the large open space for us to use but it also includes the rooms and meals.  So, we usually are sewing/quilting from 7 am to 11 pm (or later).

The retreat starts on Thursday runs until noon on Sunday, but most members will arrive a day or two early. There are even a few that will arrive on Monday for a full week of sewing.  Most members have their projects full planned and staged several weeks out before the retreat.  As an improv artist I just show up with my boxes of scrap fabrics and few yards of base fabric and then just let it flow.

It’ such a great time with a group of great guys. However, I haven’t been able to attend the last few retreats due to complications with having older dogs.

Last question: what are your future projects?

In December 2018, I was invited to join the BeeSewcial which is an international improv-only Quilting Bee which consists of 10 members which is by invitation only. The members get assigned a month to create a challenge prompt, then members have 6 weeks to create the improv piece and ship it to the prompt creator. The prompt creator will then assembly the pieces into a finished quilt.

Member are assigned a Month,  for example I have October. So, I’ll Generate the prompt for the month of October.

Several of these finished quilts have won major awards at national quilt shows.

I thought it would be a great way to expand my social network and to push me towards finishing a piece but also to submit it to quilt shows. I also knew the opportunity to join this prestigious group probably wouldn’t come around again. BeeSewcial group has very limited turn over of members where 1 or 2 members might leave the group year to year.

I’m currently working on king size bed quilt with the intention of using it as an actual bed quilt which will be my first.

Working on getting some of my pieces out in the world since we’re running out of space to store all of them. I would also like to get some piece is art shows outside of the community that we live in. Also, to sell a few to help replenish our fabric stash of solid colors.

Thanks Ken for the availability to us. Best wishes for the realization of your projects!