Hangama Amiri “Wandering Amidst the Colors” 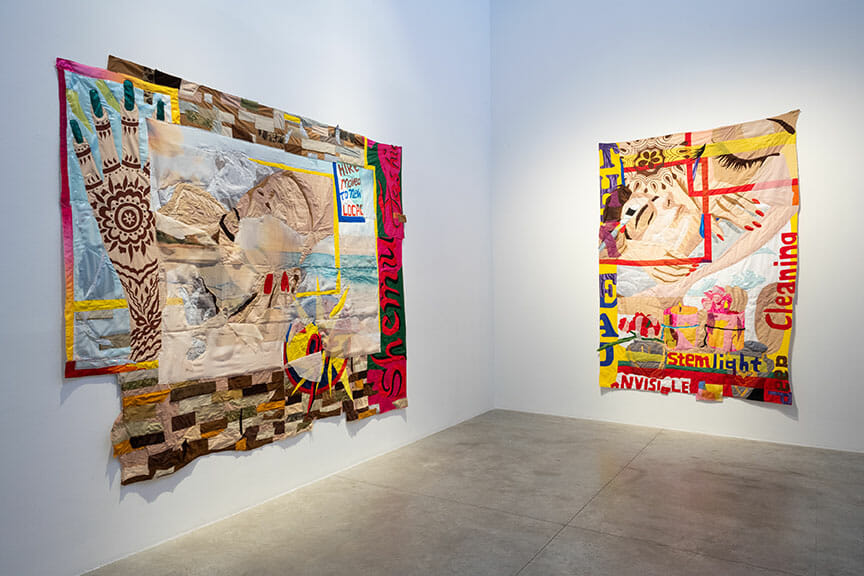 “Wandering Amidst the Colors”, Hangama Amiri’s first solo show in New York, draws viewers into her search for home. On view from April 1 through May 1, 2021, Wandering Amidst the Colors comprises an immersive, autobiographical body of work developed over the course of the past year, emerging from Amiri’s explorations of Afghan immigrant communities throughout New York City.

Splicing and layering myriad fabrics and hand-painted elements into street scenes and interiors, the artist evokes the fragmented nature of memory and hybridizing influence of globalization. The layout of the exhibition traces the artist’s journey through various neighborhoods that anchored her to her youth in Central and South Asia: the Kouchi Supermarket in Flushing, Queens, the beauty salons, shops, and restaurants full of Afghan, Nepalese, Indian, and Pakistani food in Jackson Heights, and an Afghan-owned fabric shop in Chelsea.

In Gulzar, Beauty Salon, Amiri creates a massive interior space that is devoid of figures but loaded with objects and symbols that reflect the backgrounds of the owners and patrons – such as Bollywood glamour shots and advertisements for treatments in Spanish and Pashto. Amiri creates for viewers “a sensorial experience that recalls my feelings of belonging, familiarity, and nostalgia while they are within the artwork.” At the same time, Amiri addresses the “privileged position of the artists when it comes to the politics of representation.” The omission of the figures in the interior scenes is both a way of allowing the viewer to occupy space, as well as manner of conveying privacy and respect for its regular inhabitants.

In other works, such as Rupture and Repair, Amiri introduces fragments of the human form, interspersed with text and abstract patterning. The piece references beauty advertisements seen outside the shops in Jackson Heights, which feature predominantly Caucasian models despite the majority of their staff and clientele being nonwhite. Here, the artist has “flipped the story…the images that I’ve witnessed in these stores depicted white bodies, the Western body, getting treated. I’ve made these figures brown, it’s their time to be treated, to be healed, to be taken care of.”

Hangama Amiri’s [b. 1989, Peshawar, Pakistan. Lives and works in New Haven, CT] practice spans drawing, printmaking, and painting with an emphasis on textiles for the medium’s ability to evoke the fragmentation of childhood memory and the mutability of home, place, and identity. She draws on her memories of pre-Taliban Afghanistan and her experiences as a refugee to examine how gender, social norms, and geopolitical conflict shape the lives of Afghan women.

Amiri received a BFA in 2005 from Olimov College in Dushanbe, Tajikistan. After settling in Canada with her family, she earned a second BFA from Nova Scotia College of Art in 2012 and an MFA from the Yale School of Art, New Haven in 2020. She has received numerous awards, including a grant from the Toronto Arts Council in 2017 and a Canada Fulbright grant in 2015. Her work can be found in the collections of the Art Gallery of Nova Scotia, the Royal Bank of Canada, and the Nova Scotia Art Bank, among others. Recent exhibitions include Spectators of a New Dawn at Towards Gallery, Toronto CA and Bazaar, A Recollection of Home at T293 Gallery in Rome, IT.