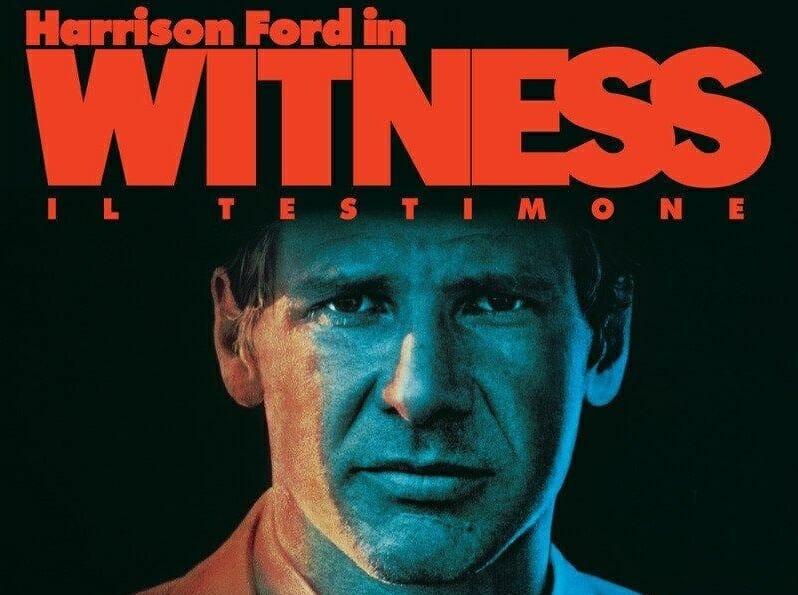 Today’s movie is a truly beautiful movie and I am not the only one saying it:it  won an Oscar for the screenplay and is the first major role for Harrison Ford, together with the child Lukas Haas, true co-star. A great historian of cinema defines it as an entertainment product, I would have given it a few more stars.

After many years, I looked at it  through the big eyes of that child dressed in black, witness of a crime, who discovers that there is also Evil in the world, which is not all peaceful and serene as in the place where he lives, a small village with his widowed mother among the Amish in Pennsylvania.

The director is Peter Weir, who at the time, 35 years ago, was very fascinated by the Amish world so distant, but also by the western genre like that of John Ford that proposed the eternal struggle, between good and evil, good and the villain, with the final triumph …
Beautiful quilts appear in the movie, which are part of the tradition and now known all over the world, they are hung, in fact, in Museums. Men cultivate the land, women create and trade textile works, covered with all sizes to be sold also as panels, embellishments for the home, for tourists who reach those villages on market days.

The word “Amish” brings to mind an image: horses and carriages, candle light and no running water in the house, white bonnets, long skirts and clogs on the feet, men with long beards and dressed in black, a world out of this world , a life without comfort, full of duties and respect for the rules.

A short story: the Amish arrived in America emigrating from Germany and Switzerland in the 1700s and continued to speak Alemannic dialects, while learning to communicate, necessarily, in English. As for their religion they are called Conservative Protestants, and in religious practice they have many points in common with other churches called free churches, like Mennonites and Quakers. The main rule: stay away from the world and other communities, so as to remain separate and away from temptations.

The first quilts were born, as far as we know, not before 1870. We have to get to the end of the 1800s for quilting to spread and become quite common. The first Amish quilts were made in solid colors, brown, blue, rust or black, geometric and simple designs. The colors recalled the products of the earth, the orange of the pumpkin, the dark green of the olive and the dark red of the grape, in deep shades. More basic colors were gradually added. The contacts with the rest of the American quilters did not contaminate their style, but enriched it. Typical of the tradition of the Amish quilts is a large central diamond, of dark fabric, with a single wide border all around.

While in the rest of the USA a new style was born that used fabrics with different patterns, which lead  to a style called “crazy”, the Amish women adopted only some of the basic American blocks. For example: “nine patches”, “trip around the world” and “sunshine” are part of their production. Being isolated has helped them maintain a style. Those women also made large wool or cotton, knitted and crochet blankets, few with silks that were expensive and considered too mundane. The Amish had a winning recipe, the black color as an essential part of the quilt. The play of black together with the colors created a vibrant and unique whole. The use of black also in the American quilt will spread only with the ‘Art quilt” well into the 21st century.

In the quilting, essentially by hand, they had a really great skill and invention: feathers, curves and geometric grids: they were quilts made for daily use, or to be put on display for special occasions. Over time, the Amish learned to use the sewing machine, but for them the ‘beautiful quilt’ has always been the handmade one, and it was an opportunity to gather around the loom and quilt all together. Living as part of the community was and is fundamental to the Amish and those gatherings of women fit perfectly into their way of life. The sense of sharing, respect for the tradition have had a great importance and the demonstration is that still today many people admire and follow and imitate that style.

Changes were only possible with community approval. The guidelines, often unwritten, were very individual. In the 1940s, they began to add other colors, pastel-like and only in rare cases printed fabrics. Many communities allowed more freedom in the design and the ‘appliqué’ style conquered them. A market was born. Americans discovered the Amish art of quilting which, together with the renewed interest in studying the past of this art, increased interest in minorities (for example: natives). Today the Amish style is a perfect and sought after object of commerce.

The story of the film is set in the present day.

A small Amish boy was the eyewitness to a murder, his eyes identify with the point of view of the camera and adds more drama to all the sequences. Detective Harrison protects him and takes a bullet in the leg. The three, because there is also the child’s mother, the beautiful Kelly McGillis, a widow wearing a white cap, must run away. They take refuge in the  Amish village where the wound will be healed and the ties of  the child with his hero will be strengthened

Two scenes from the movie

A love is born between the two adults, inevitable although impossible. The pursuers, who are corrupt policemen, will be defeated with the collaboration of the whole community, in which the hero is now part of, although with his heart in pieces, he  will have to resume its way towards the big,sinful city.

This film is also beautiful for some choices of light and color: the perfect setting contains many sequences that are true ‘impressionist’ images and inspired by Flemish paintings, this gives the cinematic story a unique elegance.

Quilting bee in the movie

But it is not over, I had announced a short surprise-addition always in this area. It is a film from the ‘history of cinema’, a musical:

1954, USA, directed by Stanley Donen with: Howard Keel, Jane Powell and many others, actors and actresses, singers and dancers.

Those young  like me (sic), will remember it well. Film that cannot be proposed today because it is extremely incorrect towards women, but placed in time and space, you can watch it with pleasure.

Oregon 1850. The plot is inspired by “the rape of the Sabine women” of Roman memory, as Plutarch told it. More than sixty years later, the film continues to be a hard to copy show. The acrobatic dance sequences and songs are still happily reproduced, imitated. But the point that interests us is the dress worn by Jane Powell where patchwork blocks are set. With this dress the actress went to the most important evenings to promote the film, including that of the Oscar nominations and was therefore immortalized everywhere.

The costume designer of the film, Walter Plunkett, asked the Salvation Army for help and had old quilts donated, transforming them into period clothes, a genius!

The two films, so far away in time, can also be combined for another detail: the big dance of the 7 brothers and the big meeting in the Amish village were born to celebrate the construction of a large stable, maybe Weir, director of “Witness ”was inspired by that musical.

Two movies that watching again almost moved me, sincerely an invitation to rediscover them, perhaps with different eyes, and attention to details.