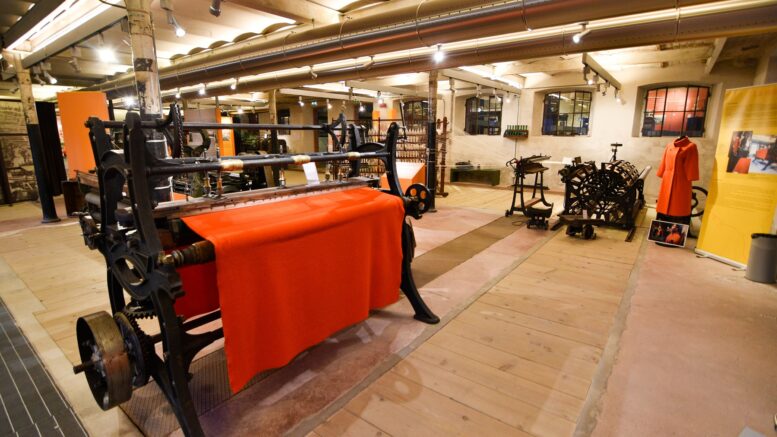 Casentino cloths were traded in Florence since Dante’s time, at the beginning of the fourteenth century. The characteristics of this territory rich in the impetuous waters of the Staggia, the Archiano and the Arno and the abundant forests favored the development of the woolen manufacture which, born to protect itself from the harsh winters of these mountains, became a primary and decisive activity for the social and economic development of ​​the area.  These green valleys provided water for washing wool, purging, dyeing the clothes and for moving the mills for the galls and the fulling machines but also the wood to heat the water in the tanks to dye the fabrics, as well as the pastures to maintain the many flocks that provided the raw material with their wool.  For centuries, until at least the end of the eighteenth century, the wool workers operated from home, in the shops under the arcades of the Borgo Maestro di Stia where they collected, selected and washed wool and after drying it on trellises, they carded it and sent it to external workers that turned it into cloth.

In the nineteenth century the advent of the factory transformed many artisans into salaried workers by transferring production from the shop to the factory where the greater investment of capital also allowed the use of new techniques and cutting-edge technologies and where all the phases of wool processing were concentrated .It was at this time, around the mid-nineteenth century, that Stia became an important center of textile production thanks to enlightened entrepreneurs who made the wool mill an efficient and productive factory but also capable of combining business success with social development.

Therefore, wool production was part of the life and identity of Stia, with time marked by the sound of the bell and the whistle of the siren. Also it guaranteed a higher standard of living than the rest of the Casentino area, at least until the manufacturing crisis of the 1980s that caused the final closure of the wool mill, leaving it in neglect for decades.

Only in 2010, the factory finally reopened its doors as a center for the diffusion of textile culture: here the Luigi and Simonetta Lombard Foundation created the Wool Art Museum with the aim of leaving a memory of the wool tradition and to ensure the wool mill could be used again for the entire Stiana community… and beyond.

touching, smelling, listening, learning, experiencing firsthand the manual skills of some of the gestures of textile processing. Inside the rooms that housed the production cycles, it is possible to retrace the scent of the oils used to lubricate the wool for carding or the intense scents of the yarns and newly dyed fabrics.The multimedia paths allow the public to listen to the deafening noises that filled the halls of the factory, to observe the functioning of the various machinery and to discover processes such as the natural dyeing of wool or, again, the history of the Casentino cloth with the functioning of the “ratinatrice ” a device that created the characteristic curl of this woolen cloth.

The tactile experience is also fundamental, it allows the visitor to fully understand the different processes and qualities of the fabric: in collaboration with the Italian Union of the Blind and Visually Impaired, the Museum has created a path that makes tools, fibers and fabrics accessible through touch, breaking down, on the one hand, perceptive barriers and, on the other, giving everyone the opportunity to discover the tactile dimension.
At the beginning of the museum itinerary there are some containers with the most common textile fibers, so the visitor can try to recognize them by hand according to the sensations perceived.

And furthermore, through the corridor of touch: a dark and narrow tunnel in stone, lined with led lights on the floor, where one can try to identify, only by touching them, the different types of fabrics hung on the walls. After rubbing the fabric in his hands, the visitor can pull it slightly so that the caption that indicates the textile quality and the fibers used to make it lights up.

The educational proposals of the Museum are also based on experimentation aimed at understanding the stages of wool processing: within the workshops, the sheep’s fleece is transformed into fabric through the use of some tools. The schoolchildren card wool with traditional tablets covered with thin needles, learn to twist it with their fingers to obtain the yarn and finally, under the guidance of former weavers, using small looms, they try their hand at creating a fabric.

Among the many collaborations, the Museum also makes use of the competence and organizational capacity of Angela Giordano, a master weaver and a leading figure in the field of Italian weaving, who has been active here since the formation of the first nucleus of the Museum, and has curated over the years both weaving courses, creative sewing workshops and exhibitions, conferences and book presentations. Furthermore, since 2015, it has been promoting the exhibition “Ieri ed oggi, personaggi nella tessitura” (Yesterday and today, characters in weaving), a series of temporary exhibitions dedicated to personalities who work in various capacities in the textile sector. This project was inaugurated with the exhibition on the art of Alice Stransky and continued over time with Dea Leidi, Giuseppe and Fidalma Lisio, Gabriele Grisolini, Gabriella Bottaru and Luigi Golin, Tiziana Gastaldi and, finally, Angela Giordano (on display until June 2021).

The Museum is therefore a living and active place, a space for doing, where you can learn using your hands, create by participating (even having fun) and where the transmission and conservation of memory is reinterpreted and curated in a current and contemporary way, conveying knowledge and values ​​towards the new generations.

Be the first to comment on "WOOL ART MUSEUM IN STIA"