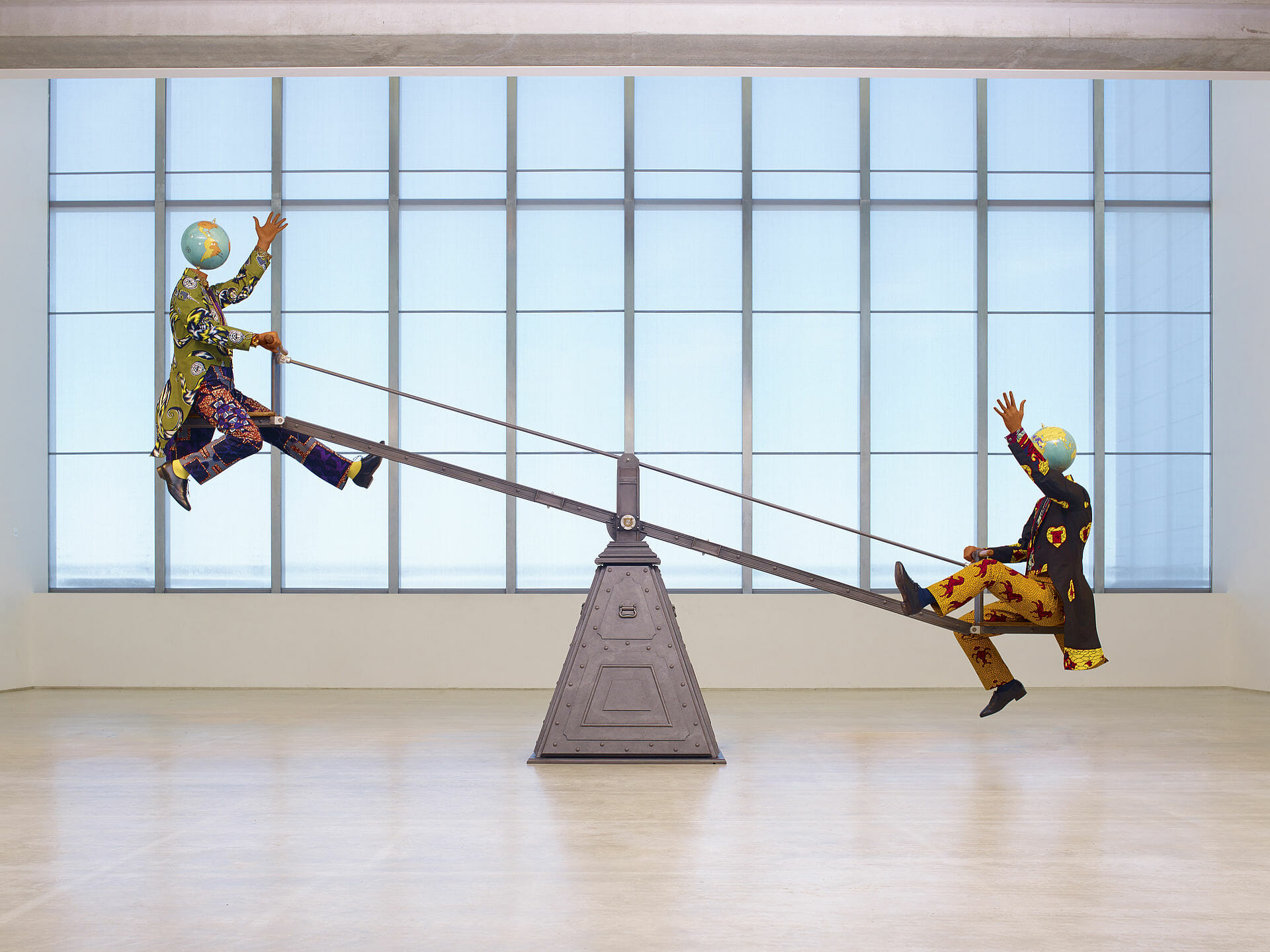 One of the most distinguished and versatile artists working in Great Britain today, Yinka Shonibare CBE RA (London, GB, 1962) has emerged as a prominent voice in the critical engagement with colonialism and postcolonialism in the global context. He has grappled with these questions since the 1990s, studying the legacy of the world-spanning British Empire in light of the interdependencies between Africa and Europe. His works analyze contemporary mindsets and bring phenomena such as racism, xenophobia, and the construction of national and cultural identities into focus. The sprawling solo exhibition at the Museum der Moderne Salzburg celebrates his diverse oeuvre and features around sixty works from the past three decades, including expansive installations, sculptures, photographs, graphic art, and films. Given his multicultural roots, Yinka Shonibare CBE RA thinks of himself as a “postcolonial hybrid.” He was born in London and grew up in his parents’ native Nigeria. At the age of seventeen, he returned to London, where he studied at the Byam Shaw School of Art (1984–1989) and Goldsmiths College (1989–1991) and lives today. In recognition of his merits, Shonibare was made a member of the Order of the British Empire in 2004, followed, in 2019, by his appointment as Commander of the Order of the British Empire.

In 2013, he was elected a member of the Royal Academy of Arts (RA). Shonibare appends the post-nominal letters CBE and, most recently, alsoRA to his name in an ironic-affirmative gesture that signals his commitment to critical intervention and historical reflection. He is the winner of the Whitechapel Gallery’s 2021 Art Icon Award. As a student, Shonibare faced expectations that he would address his “African” background in his creative practice. In the mid-1990s, he came across the colorful Dutch wax batik fabrics that have since served him in a wide variety of ways in works that visualize the findings of his investigations into colonialism and postcolonialism.

Most viewers perceive the fabrics as “authentically African,” but they are actually Indonesian in origin. Shonibare uses fabrics made by the Dutch company Vlisco (est. 1846) that are also known as Wax Hollandais, Super-Wax, or Java. Their evolution is closely bound up with colonial trade routes; the complex history of their reception ties in both with heteronomous attributions of identity and with the African continent’s struggle for self-determination. Shonibare’s works combine the fabrics and their ornamentation with references to historic events and well-known archetypes from Western art history in an effort to point up the colonial entanglements especially of Europe’s elites. Wide audiences took notice of his art when his monumental Gallantry and Criminal Conversation (2002), a parody of the Grand Tour of British noblemen as excessive sexual debauchery, was shown at documenta11. Shonibare dresses life-size headless sculptures in elaborately tailored costumes, preferably in the style of the Victorian era. His films and photographs, too, are opulently designed productions with strong theatrical accents that underscore their stage-like quality and fictional nature. Rather than trying to illustrate history, the artist seeks to prompt a reflection on social and political realities that remain in force today. His art is eminently political, but far from being didactic or browbeating the viewers, it amuses them with theatrical gestures, role-play, and masquerades deployed to parodic effect.

The lingering geopolitical effects of colonial power relations, decadence, and violence are also themes in Shonibare’s first film Un Ballo in Maschera (2004), which he presented in the exhibition of the nominees for the Turner Prize. His well-known Nelson’s Ship in a Bottle (2010–2012), commissioned for the Fourth Plinth on Trafalgar Square, London, exemplifies his engagement with questions of colonial representation in public space. In the photographic series Diary of a Victorian Dandy (1998), which has since become iconic, Shonibare casts himself in the titular role, basking in the limelight of the social scene—as the only Black man among Whites. His take on the Victorian era is ambivalent: personally, he is an aficionado of its characteristic style and the sophisticated luxury and refined taste of its aristocracy, but he is also emphatic about the inhuman flipside of British colonialism. Shonibare reenacts the display of power, wealth, and elegance as an upper-class cultural practice with evident relish and at once undermines it. The use of colorful “African” fabrics turns his Victorians into hybrid models, their attire and skin color transmuting the world of gentlefolk into a stage for subversive and emancipatory narratives.

Another characteristic example of the artist’s preoccupation with the complicity of European elites in colonialism, exploitation, and oppression is End of Empire (2016), from which the exhibition at the Museum der Moderne Salzburg takes its title: two figures face each other across the length of a seesaw, their heads replaced by globes. They embody the enemy parties in he First World War with their respective colonial spheres of influence. The title End of Empire is a reference to the fact that the Great War was the first profound shock to the imperial global order, fueling anti-colonial movements all over the world. Shonibare’s more recent works reflect a strong interest in cartography and the multiplicity of perspectives on history as well as a sustained meditation on mobility and cultural identity. On several occasions, globes serve to document and deconstruct worldviews—and to broaden our angle of view.

The same educational impetus speaks from a series of libraries that the artist has realized since 2014. Each installation consists of several thousand volumes, bound in Shonibare’s signature colorful batik fabrics. The African Library (2018), one of the most spectacular works realized in the last several years, is dedicated to the memory of individuals who played key roles in the African independence movements and made vital contributions to their countries’ nation-building efforts and the formation of a modern African consciousness. The Museum der Moderne Salzburg is honored by the opportunity to show this extensive installation as part of the exhibition Yinka Shonibare CBE. End of Empire.