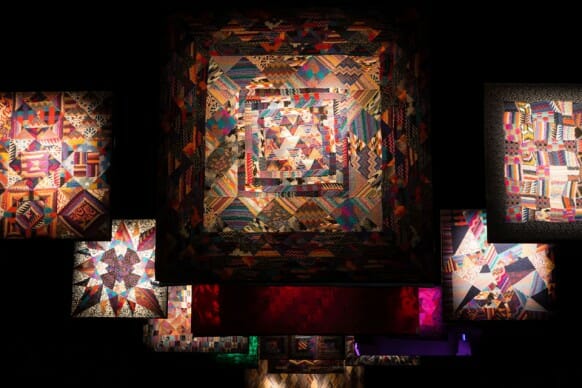 Thursday 11 February 2021 celebrated the centenary of the birth of Ottavio Missoni, stylist and  artist who with his wife Rosita was one of the most important fashion entrepreneurs of the twentieth century and spokesperson for Made in Italy in the world.

For the occasion, the Museum presents the new layout of the “Ottavio Missoni Tapestry Room” in collaboration with the Ottavio and Rosita Missoni Foundation.

The section, which has become a permanent part of the collection, preserves a series of large tapestries made in a patchwork of knitted fabric, set up in a space imagined by his son Luca Missoni and designed by Angelo Jelmini, to underline the value of these particular textile creations by Ottavio Missoni who, starting from the seventies, chose them as an exclusive technique of artistic expression, capable of concentrating in a peculiar way the transversal interests, both in fashion and in art, by matter and color.

“On the occasion of the 100th anniversary of my father’s birth – says Luca Missoni – it seemed natural to us to validate the display of his tapestries in the museum room dedicated to him with a thematic narration of his artistic work. A selection of original studies, always drawn using colored markers on squared paper, made to design his creations and tapestries.  A choice of knitted fabrics, some of which were already exhibited in 1975 at his first exhibition at the Galleria Il Naviglio in Venice. A series of polychrome paintings in acrylic on wood created in an experimental form in the early 1970s. Part of the exhibition presents the brilliant sporting career of Ottavio, athlete of the Gallaratese Gymnastics Society since 1947, culminating in the 1948 London Olympics with the final in the 400 meters hurdles.”

The images are taken from the Missoni Archive website