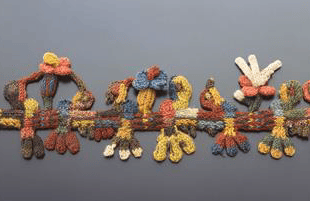 Among the holdings of the Abegg-Stiftung in Riggisberg is a small but impressive collection of textiles from Ancient Peru. The most interesting of these are now presented to the public for the first time in a dedicated exhibition.

The peoples of Ancient Peru were already producing a vast array of finely crafted fabrics and garments over two thousand years ago. That we can marvel at them today is thanks to a combination of climatic and geographical conditions, specifically the dry, salty soils of the desert regions of coastal Peru, in which these precious artefacts were preserved. Protected against both moisture and light, they survived the ravages of time either as offerings to the gods or as grave goods, the burial customs of past civilizations being a crucial factor in the “survival” of countless Peruvian textiles. The “Paracas” culture that existed from the 8th to the 1st century BCE, for example, swathed its dead in up to fifty layers of cloth, including highly ornate tunics, loincloths, headscarves, skirts and coats. In more recent cultures, the deceased were given clay pots stuffed full of exquisite garments. These textiles are haunting testimony to worlds that have long since disappeared and afford us a tantalizing glimpse of a distant past.

What first catches the eye when admiring the garments, fabrics and embroideries on show in the exhibition are their expressive and mysterious figures and their bright colours, stylized animals and abstract patterns. But the exhibits also tell of the early civilizations that existed in Peru before the destruction wrought by the Spanish conquistadors. Pre-Columbian Peru was shaped by various cultures, which for all their differences had one thing in common: the production of extravagantly designed textiles that played an important role in everyday life, in religious ceremonies and in each culture’s death cult. The exhibition showcases some impressive examples of the fascinating textile heritage of those ancient times, starting with the aforementioned Paracas culture and the Nasca culture that succeeded it – popularized by the giant line drawings that it inscribed in the desert – to the Tiahuanaco, Huari, Sicán, Chimú, and Chancay civilizations that are virtually unknown to all but a small group of experts, and finally the famous Incas, who ruled from ca. 1430 until the Spanish arrived in Peru in 1532.

The exhibition is arranged chronologically and begins with some charming embroideries from the late Paracas culture, which transitioned almost seamlessly into Nasca culture. Many of the Paracas-era textiles are remarkable for their linear, often strictly geometrical designs, as is graphically illustrated by some embroideries on a red ground, where just a few straight lines of black and yellow wool are all that is needed to articulate some stylized felines. Only on closer inspection do we see how cleverly these creatures are “nested” one inside the other. The colourful embroideries showing humans or humanoid beings are quite different. Here the figures have natural forms that stand out clearly against the background. Somewhat crudely drawn, they are reminiscent of modern-day comic-book figures. They wear headbands, tunics and loincloths as well as a striking eye mask. They also have trophy heads hanging from their hips. These severed human heads have been found in numerous burial sites and seem to have played an important part in the rituals of both Paracas and Nasca culture. The trophy skulls presumably served as proof of a warrior’s valour and success in battle.

The multi-coloured, three-dimensional border fragments on show in one of the display cases are especially intriguing. While some of these take the form of geometrical ornaments, most are tiny, humming-bird-like creatures with long beaks, sucking nectar from colourful flowers. Although they look as if knitted, the borders in fact a special kind of embroidery, as is explained by a short film showing how these miniature sculptures were made. Such decorative trimmings were often sewn onto cloaks and shawls as a fringe-like ornament.

Another highlight of the show are the tunics that have survived intact and that are displayed on stands tailor- made for this purpose. The tunic, like the skirt and loincloth, was a key element of the costume typically worn by Ancient Peruvian men. It tended to be short and either sleeveless or fitted with only rudimentary sleeves. The sides were usually closed, which is why this kind of garment is called a tunic rather than a poncho. A vertical slit served as neck opening.

Such a garment was assembled out of at least two pieces of cloth sewn together as a rule. The cloth was often woven on a backstrap loom, meaning that one end of the warp was attached to a belt worn round the hips, while the other was suspended from a post. Given how basic such looms were, the artistry of the fabrics woven with them is remarkable. Their colourful patterns consist mainly of sophisticated combinations of geometric shapes and stylized beasts or humanoid figures. The designs and colours of these textiles make many of them look surprisingly modern. A brief video is provided to help visitors decipher one of the patterns: an arrangement of feline heads and wave motifs.

The exhibition ends with two garments, a headdress and a tunic, both of which are densely studded with bird feathers. Both have been dated to the fifteenth or sixteenth century and attributed to the Chimú or Inca culture. According to the desired pattern, the folded quills were hung over a cotton thread and knotted. Then the thread full of feathers was sewn onto the supporting fabric. Most of the feathers come from birds in the tropical regions to the east of the Andes and from the Amazon basin. The tunics exhibited here were perhaps worn at ceremonies that had something to do with water. That would explain the stylized red and green fish shown in front of a shimmering blackish-brown background. Further down there are white boats containing four-legged creatures, each of whom dons an expansive headdress and is sticking out a blue tongue. The feather-work is so fine and intricate that the pupils of the eyes of both the figures in the boats and even the fish can be clearly made out.

TREASURES FROM THE VAULTS

Almost all the early Peruvian textiles in the Abegg-Stiftung come from the private collection of Werner Abegg (1903–1984). He acquired the bulk of them in the early days of his collection, between 1930 and 1933. At the founding of the Abegg-Stiftung in 1961 these South American gems became the property of the foundation. The Pre-Columbian collection has since then been augmented by various donations and acquisitions from private collectors in Switzerland. The textile treasures from Ancient Peru are normally kept in storage at the Abegg-Stiftung. This year’s exhibition at the Abegg-Stiftung is thus a unique opportunity to discover these pre- Columbian garments, weaves and embroideries – all of them as remarkable for their powerful language of forms as for the sophisticated manufacturing techniques used to make them.