The Social Fabric: Black Artistry in Fiber Arts, an exhibition in homage to Viki Craig 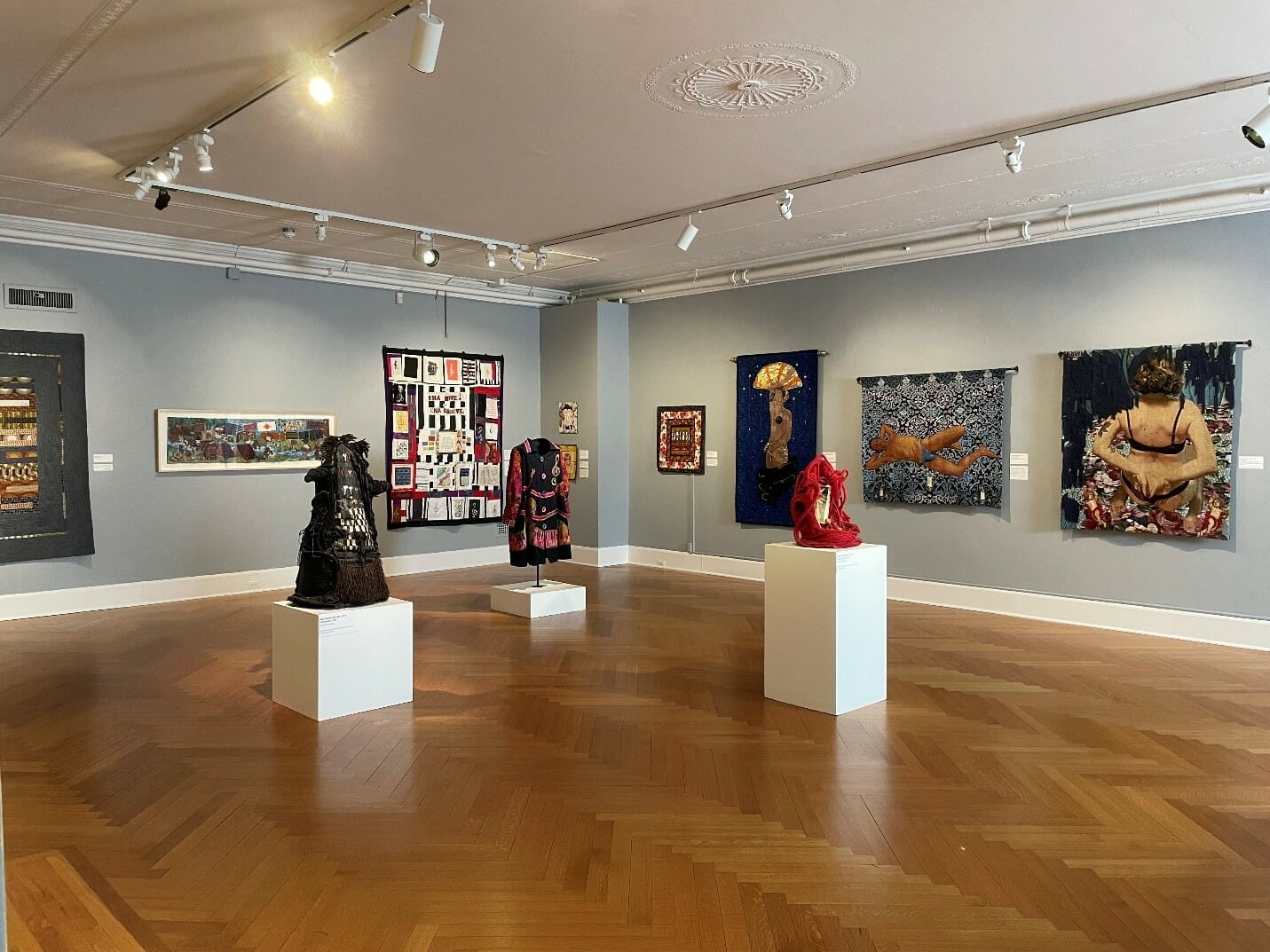 From June 4, 2020 to October 24, 2021, the Morris Museum will present an exhibition of contemporary art exploring the medium of fiber by Black artists whose practice is based in the U.S. The Social Fabric: Black Artistry in Fiber Arts, An Exhibition in Homage to Viki Craig features 62 works by 26 established and emerging artists, and includes quilting, embroidery, tapestry, sculpture, and mixed-media assemblages. This inaugural exhibition announces the joint venture between two Morristown organizations—the Morris Museum and Art in the Atrium, Inc. (ATA)—to present annual exhibitions that investigate the diversity of Black artistry. This year’s theme of fiber arts honors ATA co-founder and avid quilter Viki Craig (1947–2018) with a special installation within the exhibition, titled A Quilted Legacy, showcasing 13 of her quilts.

Today’s fiber arts combine conventional textile skills with art and design practices. In the United States, fiber art by Black practitioners is deeply rooted in African American quilting tradition. As an art form, contemporary quilt making was popularized in the 1970s and 80s, continuing traditional techniques such as appliqué, embroidery, and tatting. Multiple transformative developments opened the field to further experimentation. Black fiber artists began to incorporate printmaking, painting, and collage-like appropriations, as well as design considerations of line, shape, and color. Works became more conceptual and enriched with content, as found in the quilted narratives of Faith Ringgold and Michael Cummings that not only capture storytelling, but also convey societal and cultural statements at the intersection of racial identity and struggle. The addition of such dimensional materials as beads, feathers, raffia, and found objects reflect assemblage art practices, as seen in the works of Bisa Washington, Shervone Neckles, and Katie Commodore. Diverse in scale, concept, and execution, Black fiber art today captures a spirit of individuality, celebration, and pride.

It begins in Bickford Gallery with “New Approaches”. These fiber and textile works range from finely detailed quilts, embroidery, weaving, and tapestries to textile creations that are sculptural in their dimensionality. Some are unapologetically political as they address social issues and injustices. Others delve into the wider realm of fiber arts through various techniques and other media, pushing the envelope by using unexpected materials and manipulations, such as plastic strips cut from shopping bags to create pictorial narratives.

The exhibition continues in Bush-Compton Gallery with “Narrative and Representation”. These quilts and embroideries tell a story, akin to illustration. Some artists work in the tradition of Faith Ringgold’s story quilts, combining painting, quilting, and storytelling. Some elements may be symbolic representations of emotions the artist wishes to convey. They may envision or re-envision historical events, or they may celebrate people important to the artist.

The exhibition resumes in Burger Hallway with “Tradition”. As a historical textile art form, quilting is indelibly linked to the past. Under slavery, Black quilt makers sometimes encrypted messages in their work. They communicated with one another using signs and symbols both ordinary and supernatural. It was a language that community members understood. The patterns include: log cabin (patterns with stripes), flying geese (patterns with triangles), and wedding ring (patterns with circles).

A special focus exhibition on the artwork of ATA co-founder Viki Craig, titled A Quilted Legacy, is featured in Tregenza Gallery. Born Victoria LeBeaux Clark (1947–2018). Viki was taught to sew at age five by her mother and her grandmother, who was a quilter. As a young adult, her affinity for sewing and working with fabric continued, with her first large textile pieces created in the years following her marriage to Charles D. Craig in 1970. From the beginning, Charles, an attorney, and Viki, a teacher, shared a deep passion for community and education, and a pride in their heritage as African Americans. The young couple moved to Morristown in 1978. Soon afterwards Viki became a member of the artist collective Black Women in Visual Perspective in Newark, New Jersey. In 1992, the two built a circle of like-minded friends, colleagues, and art enthusiasts that would become Art in the Atrium. Motherhood and work as a third-grade teacher forced Viki to put her work with fabric on hold. It was not until she retired from teaching in 2013 that she returned to daily quilt making. As a schoolteacher, Viki’s empathy for educating and exciting audiences drew people to her. Her natural interest in textiles forged lifelong relationships with fiber artists. It is to her talent and championship of Black artistry that this exhibition is dedicated. This focus exhibition includes 13 quilts, and will remain on view through January 2022.

Art in the Atrium, Inc. (ATA) is a non-profit tax-exempt volunteer arts organization that was founded by Charles and Viki Craig in Morristown, New Jersey in 1991. Since its inception, ATA has annually exhibited four floors of African American fine art at the Atrium Gallery in Morristown, New Jersey, becoming the largest exhibit of its kind in the state. Past exhibits have featured such artists as David Driskell, Willie Cole, Deborah Willis, Benny Andrews, Elizabeth Catlett, Bisa Butler, Janet Taylor Pickett and Faith Ringgold.

ATA awards scholarships to promising visual arts students, curates satellite art exhibits for corporate and government partners and has hosted “Artists in the Schools” programming. In 2001 and again in 2016, the organization was named “Arts Organization of the Year” by Morris Arts.

In 2020, ATA launched an online gallery format at artintheatrium.org and forged a partnership with the Morris Museum, culminating in a 2021 exhibit.

Founded in 1913, the Morris Museum is an award-winning, multifaceted arts and cultural institution serving the public through its exhibitions and performances which strive to interpret the past and discover the future through art, sound, and motion. The Museum is home to the historic and internationally-significant Murtogh D. Guinness Collection of Mechanical Musical Instruments and Automata. Changing exhibits of contemporary content further illuminate its Permanent Collection. The Museum’s Bickford Theatre is a 312-seat performing-arts facility, offering unique programming in film, jazz, and live performance through its innovative series, Live Arts at the Morris Museum. The Morris Museum has a proud tradition of meaningful educational programs and family events. During the pandemic this summer, the museum turned its Back Parking Deck into NJ’s liveliest performance space, with Jazz, Live Theater and the acclaimed Lot of Strings Festival. Thousands of music lovers experienced world-class musicians like the Orpheus Chamber Orchestra, among others, performing live, in a unique and safely socially-distant environment.

New Jersey’s only Smithsonian Affiliate Museum, Morris Museum is also the first museum in New Jersey to be accredited by the American Alliance of Museums, it has been designated a Major Arts Institution and has received the New Jersey State Council on the Arts’ Citation of Excellence, among other awards.