Threads of Life: A History of the World Through the Eye of a Needle By Clare Hunter 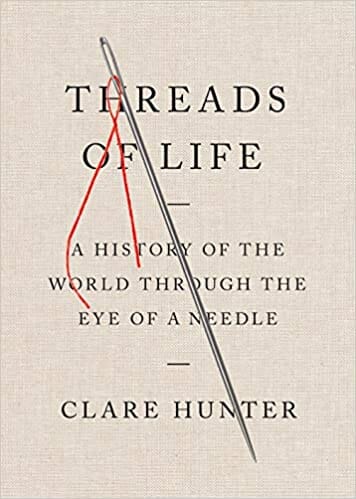 A history of sewing and embroidery, told through the stories of the men and women, over centuries and across continents, who have used the language of sewing to make their voices heard, even in the most desperate of circumstances.
From the political storytelling of the Bayeux tapestry’s anonymous embroiderers and Mary, Queen of Scots’ treasonous stitching, to the sewing of First World War soldiers suffering from PTSD and the banner-makers at Greenham Common, Threads of Life stretches from medieval France to 1980s America, from a Second World War POW camp in Singapore to a family attic in Scotland. It is as much about identity, protest, memory and politics as craft and artistry.
In an eloquent blend of history and memoir with a unique understanding of craft, Clare Hunter’s Threads of Life is an evocative and moving book about the need we all have to tell our story.

Clare Hunter has sewn since she was a child. She has been a banner maker, community textile artist, and textile curator for over 20 years and established the community enterprise NeedleWorks in Glasgow. She was a recipient of a Creative Scotland Award in 2016. She lives near Stirling in Scotland.