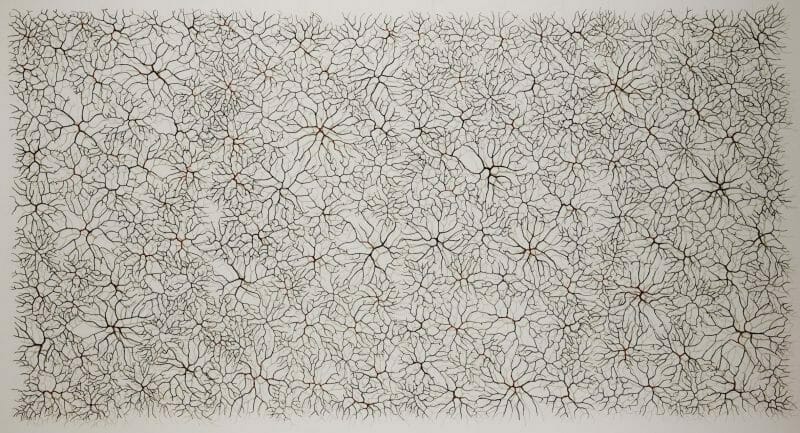 Galerie Maria Wettergren is delighted to announce that the Centre Pompidou, Paris, has acquired Vena Cuprum by Norwegian artist, Gjertrud Hals. Handmade by Hals and inspired by organic and animistic principles, the copper thread sculpture is in the words of the artist “to be considered as a structure or membrane, like a web – an organic network of thought and emotion.”
Vena Cuprum is currently exhibited in ‘Mimèsis. Un design vivant’ at the Centre Pompidou, Metz through 6 February 2023.

Norwegian artist, Gjertrud Hals, is considered as one of the redefining figures of fiber art, liberating the texile from the loom in order to make three-dimensional sculptures. Hals expresses herself through natural fibers, which she transforms through various techniques, including weaving, knitting, casting, spraying and cutting. Born on the northwest coast of Norway on the small island of Finnøya, Hals is deeply influenced by the nature and culture of her region, and Norse mythology is a great source of inspiration for the artist.

Trained in the art of tapestry-weaving in the 1970’s, Gjertrud Hals’ interest in feminism and women’s culture associates her with the new wave of women artists exploring the sculptural potential of textile such as Sheila Hicks et Magdalena Abakanowicz. Hals expresses herself through natural fibres, which she transforms through various techniques, including weaving, knitting, casting, spraying and cutting