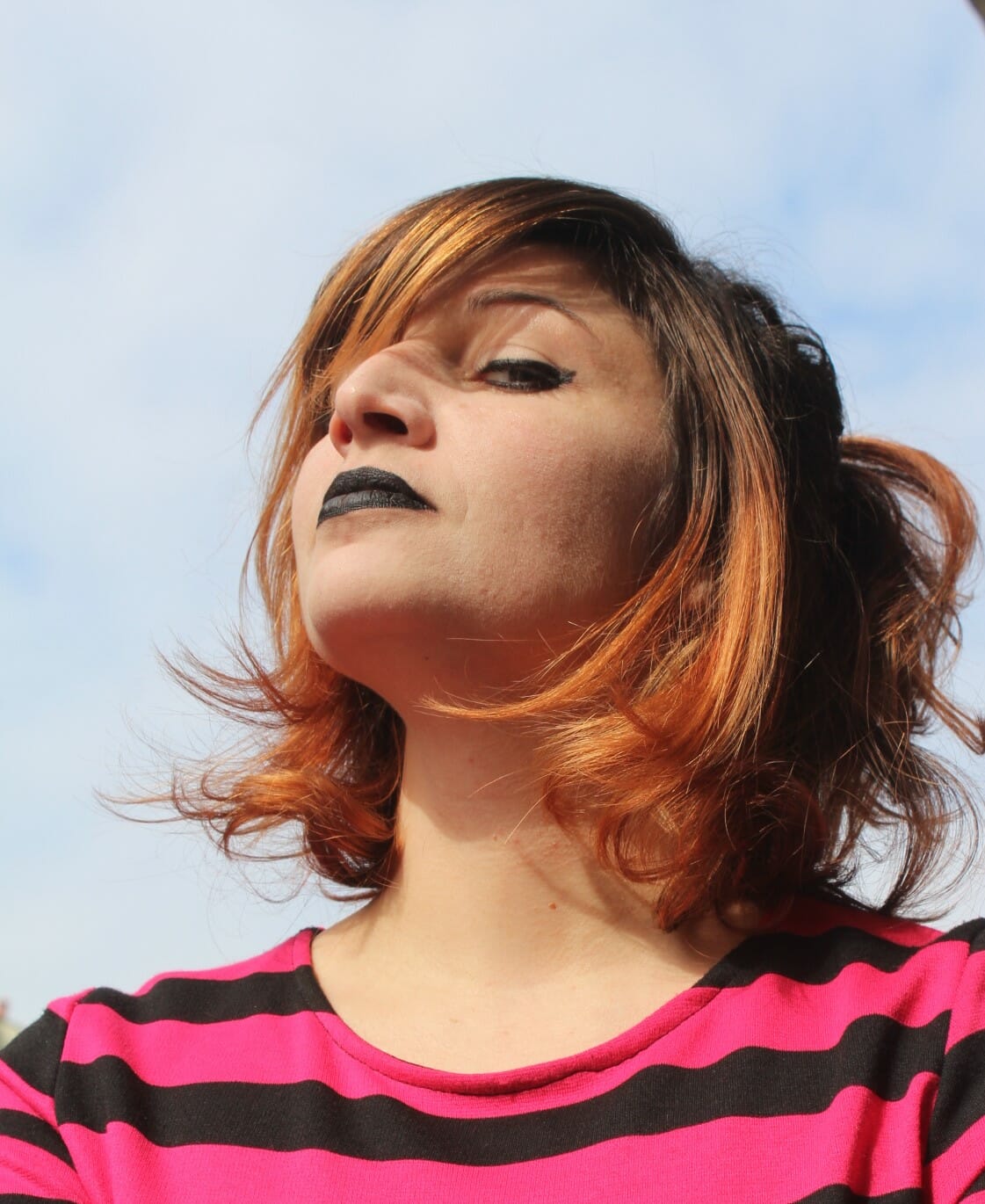 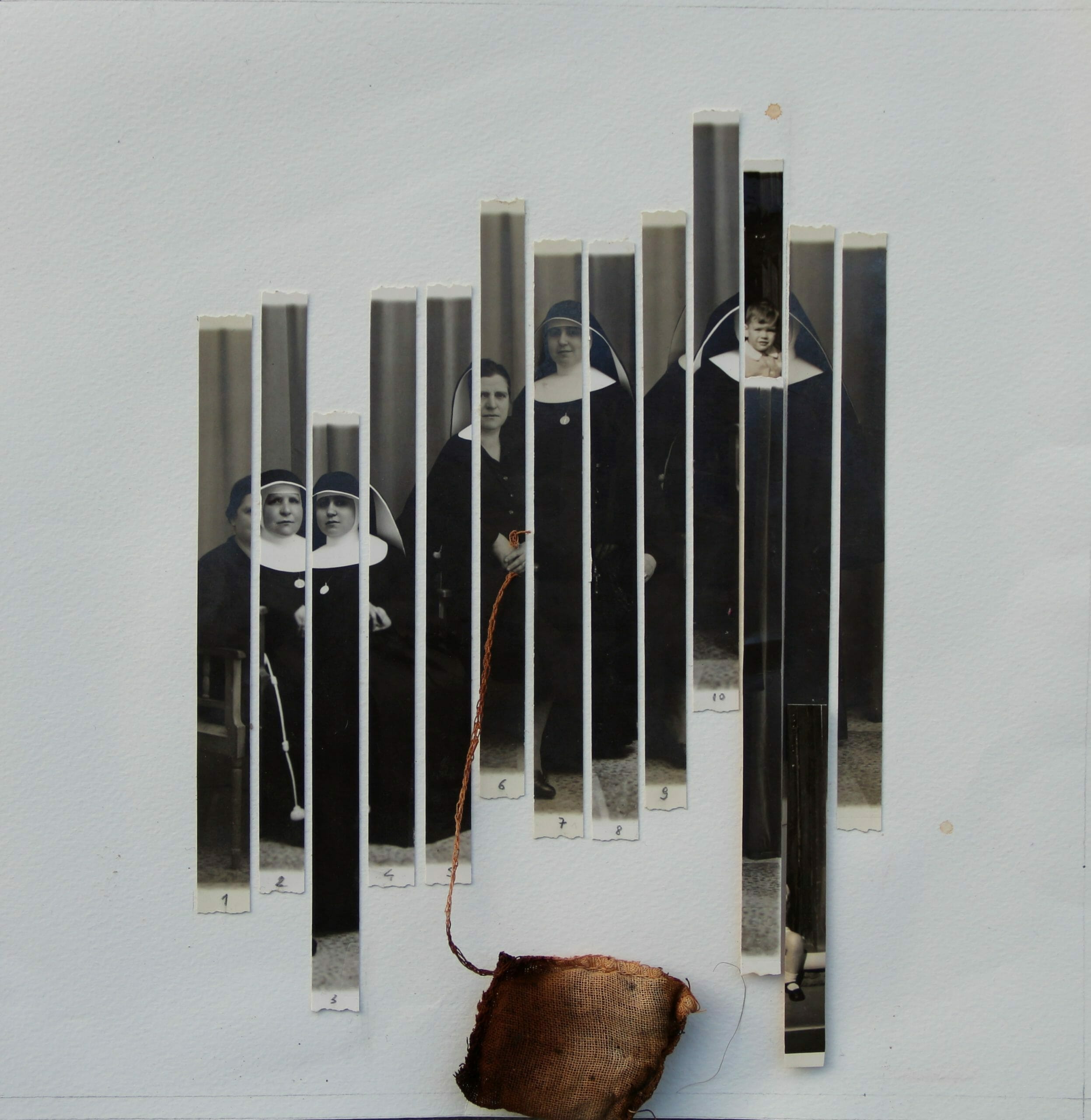 Old photographs, tea bags and red cotton thread are some of the material elements through which the artist Angela Viola investigates the themes of identity, the emotional sphere and human interiority. An artistic research that is divided between small wall works and complex site-specific installations where the textile components find a significant space.Born in Palermo, after graduating in Painting at the Academy of Fine Arts in her hometown, she moved to Cereggio (RE). She has participated in numerous exhibitions and artistic projects and has been a finalist of several Awards including the Exibart Prize 2022.

Within your artistic production, the use of red cotton thread is recurrent. What does this material represent for you and what meaning the red color take on in your works?

The red thread has marked a part of my research since the beginning of my work, in 2004, to reach its progressive exhaustion a few years ago. It has a meaning that ties to “letting flow” inside a vital energy that constituted for me a moment of passage and overcoming of a trauma: I was able to sublimate an experience through that thread, in which I crossed pain and forgiveness. And it is precisely from a quote by Louise Bourgeoise that I found the authentic truth of my action (from drawing to embroidery): “Needles have always fascinated me. The needle is used to mend the tears. It is a request for forgiveness.”

Often, through your works you analyze the definition of identity in relation to the family unit and one’s origins. In some cases, old black and white photographs, in some parts, are torn and stitched up through the act of embroidery. Tell us about this artistic process and how it was born.

The action of mending is connected to the Bourgeoise quote: also in the Happy Family series (started in 2010) it was born from the need to put pieces back together , especially linked to our inner experience, which have accumulated or fragmented in the first form of relationship we have lived: that with the family.Over the years I have studied and have gone through experiences that have made me understand how each of us, at some point, tries to put order to the disorder of our identities, generated and derived from the family environment: bonds and traumas that navigate between uncontrolled memories and actions that often define who we are.Through the use of photographs (recovered and saved from being abandoned in the markets or from the hands of those who did not know how to keep them) I tried to save and imprint in the memory the information that these images carried with them. Imagining (or visually listening to) its history has given rise to numerous works which, at times, saw the involvement of different photographs and stories, torn and stitched up, as if to build a new story or to define a new ending.

Red is a color often associated with violence against women and femicide. You created a complex site-specific installation entitled con (FINE) in which the red thread defined some ruined areas of the walls as a metaphor for the physical and psychological wounds left on the victims. What did this experience represent for you? Do you think that art can be a means to raise awareness against gender discrimination and fight against violent acts?

The site specific installation con(FINE), was designed in 2021 for a specific place: the Campanini court of the Castelnovo ne ‘Monti (RE) library, with the intention that it was clearly visible to visitors to the court and that it was a shared work.The realization of the work saw the involvement of four female and one male student from the Liceo Marconi in Parma who with me, created the sculpture of a uterus, placed in the center of the court, took part in a recorded video action (in which we tightened dozens of knots by reciting the names of the victims of femicides in 2020, as a continuous mantra) and realized the production of the wounds on the wall. Each of us had chosen a space, used his own voice, got his hands red and shifted for a week his silent thought, in every moment and in every action, debated or expressed, reflections, clashes and 7 days long smiles.Finally, on the day of the inauguration, the public could leave a mark in an area dedicated to witnessing a violence or abuse suffered. An experience of comparison and sharing, of exchange of experiences and testimonies between young women, myself and a young man in relationship with the public.I believe that, beyond their choices and actions, having allowed the “construction” of a work full of meaning has imprinted on their consciences the form of a new thought, greater awareness and emotional preparation on the subject.

The red thread is also present in the Ma (ta) sse series. In this case, a female figure is placed side by side with a textile tangle. What does the latter represent?

The ball represents both a skein and a mass: synonyms of accumulation and sedimentation, tangle and disorder that in their abstraction and formlessness take their own shape. The female figures are linked to an emotional state, strictly personal, in which I have transferred and sublimated a trauma of abuse suffered. Drawings that have multiplied and that have been acquired by numerous collectors: what looked like only stickers on scattered sheets turned out to be more than I expected.

Your wall installations are organized within wooden boxes that appear to be a sort of protective container for the scenes that are represented inside them. What is their function and where does this choice come from?

The almost inexplicable passion for boxes and containers characterizes me: I use them as small scenographic stages in which to stage fragments of images, sometimes incomplete, which can suggest to the observer (and not necessarily tell in a didactic way) to imagine the missing parts of the story so that they can make room for theirs.It is also a reliquary custody, a form of conservation of images and fragile aspects of our existence: at times they are surreal, at times metaphorical, at times explicit, which aim to emotionally involve those who observe them, to arouse doubts or to create annoyance.A kind invitation, or maybe not, but which must always be cared for, elegant in shape and aesthetics so that it can impress on the observer, or at least I try. I think you can communicate something unwelcome, true or authentic by keeping beauty and kindness alive.

What do you think of contemporary art? Are there any female artists or artists you are inspired by in your work?

I observe a lot the work of the artists who are contemporary to me: I am always in search of that beauty and that kindness, of amazement and authenticity, of dedication (almost maniacal and devoted) to their work.I appreciate this in the contemporary world, that is, not having lost attention and seriousness in one’s work as an artist: whether the topics dealt with are related to the technology of materials, through denunciation or irony, it doesn’t matter.The important thing is not to forget to lead the viewer into amazement and that immersive silence that leads you to another dimension. There are too many discount products, too many works considered indispensable but not necessary: ​​art can also be an end in itself but not completed in a short time.

Do you prefer to work alone in your studio on small-sized works or in the midst of the multitude when you create site-specific works for outdoor environments?

It is not the physical space that counts: if I can access the channel of my dimension, the space around it no longer exists and making a box or a two-meter sculpture does not change… I know I am in the place where I would like to be.

What direction is your artistic research taking and what are you working on now?

It is a moment of profound crisis, dictated by the confrontation with what surrounds me and by what I often let invade that “space”. I am in a moment in which I am definitively closing some chapters, dictated by choices and experiences that are no longer tailored to me.I am working and researching on the stratification of matter, in its infinite forms and on how to restore even more order to chaos. At the age of 41, I want to start again, to let go of many aspects of my old research to keep a few necessary things, so that I can achieve my only purpose and my only need, to be an artist until the end of my days.