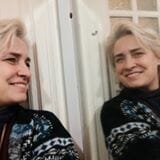 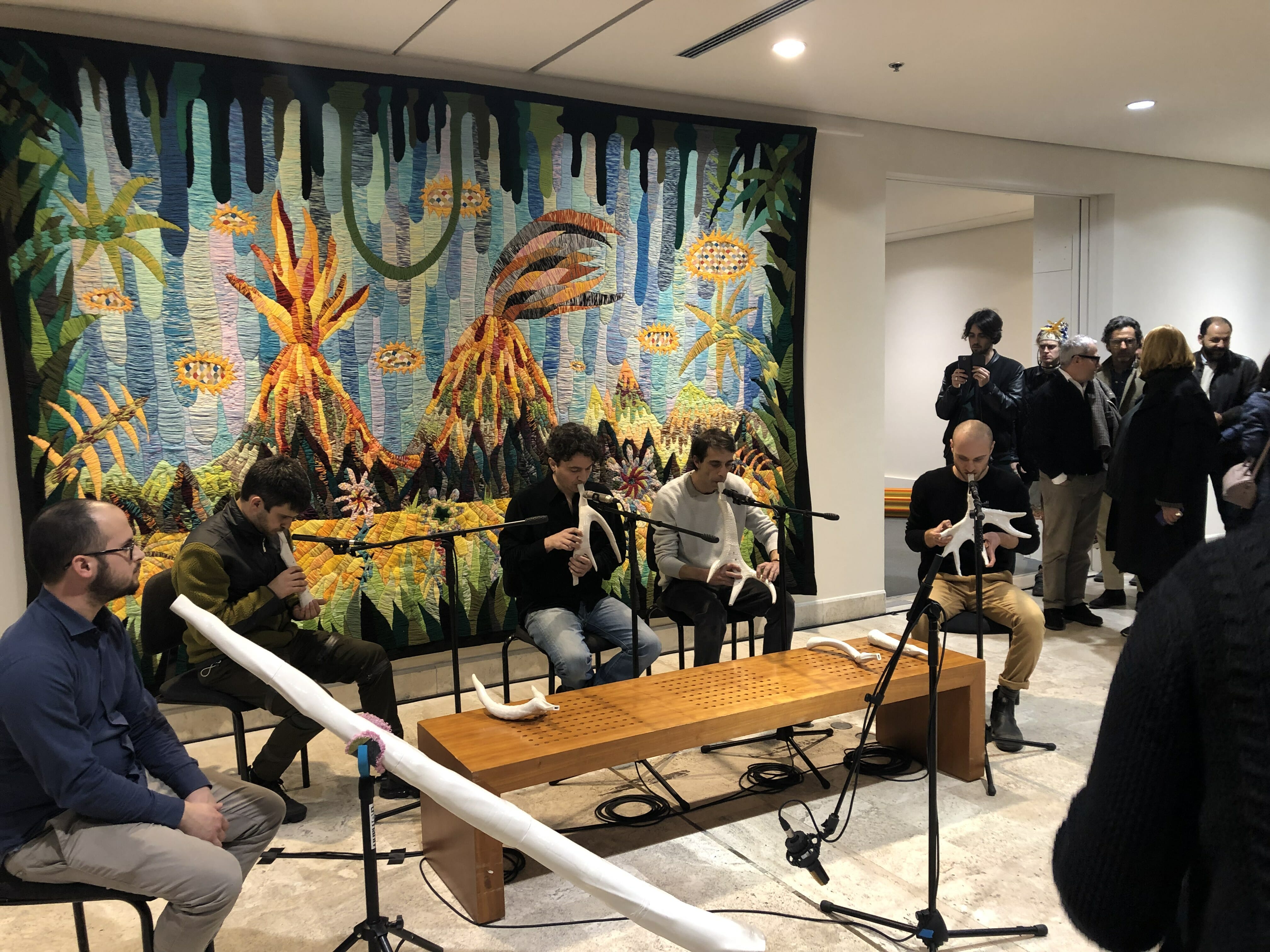 From notes to colors. From contrabass to sculptures and then to tapestries. From musical harmonies to embroidered harmonies. Matteo Nasini’s didactic journey is particular, he is a true versatile artist. When he was a child he liked to draw but also to play the flute. He observes the glare of the light through windows but sings in a choir. He doesn’t pursue drawing but music. It becomes a passion and he graduates in contrabass, at first at the Conservatorioin Latina, then in Rome. A great career starts, culminating when he enters Riccardo Muti’s orchestra, the one he founded once he left the Scala. With Muti he plays music around the world for about three years. But Matteo keeps drawing, with recurrent themes, even though everything remains suspended inside of him. Then the crisis, when he is around 30, and the desire to give himself completely to art and to stop in Rome. He decides to resign from the orchestra. “How can you play with Muti and leave everything behind?” Very few people understand. One of these people is Mr. Muti himself: “Go and come back whenever you want!”. A good omen, if to say so is one of the great conductors of the world. An omen that brings good luck to Matteo: ten years later his artworks travel the world. He stopped in Rome and had a daughter.

One of Matteo Nasini’s textile art works that travels the most is “Principio Selvatico, SplendoreNeolitico” (Neolithic Sunshine), a great tapestry that measures four by three meters. Until November it was exhibited in France at the Mrac, in Occitania, in the exhibition Chemins du Sud, which puts together artists of different eras that have in common the ideological distance from the megalopolis and the industrial coldness. Artists-artisans that put man in the center, its roots, and a reflection about time.

In the artwork “Principio Selvatico, SplendoreNeolitico” ‘roots’ and time, very distant, are evident. The landscape is ancestral, nature is primordial, with its volcanoes, colorful flowers and lots of green. The tapestry is all embroidered by hand, in a studio that, by chance, due to a fault in the electrical system, had no power. Matteo worked with another person. They started in front of a large window. It was winter, they started around 8 am, with the light of the day and ended around 4 pm, when dark arrived, as it happened a century ago. “I couldn’t send an email, I did not have a fridge, but I could embroider”, he tells me. It took me months to finish. At last the light came back, but the best time, he recalls, was the ‘pre-industrial’ one.

“My Neolithic work was a long one but also a reflection on the origins of sound” he explains, “I had to rebuild primordial instruments. Thanks to the museum of Natural History of Verona, I could scan in 3-D, and rebuild through modern technologies the bones of extinct animals dating back to 30 thousand years ago. Once rebuilt I could listen to their sound and create a harmony for the public”. Matteo lets me listen to the sound of these strange instruments… “Neolithic Sunshine”.

Let’s get back to embroidered fabric. Matteo starts from a drawing. From simple images with their recurrent theme, coming from his fantasies.

His first artwork was “Piango Rosa”. The image of this patchwork horse who cries pink threads has been with him for months, until he decided to embroider it. “I started by thinking that I wanted to cover the drawing” he tells me. Matteo remembered his grandmother, embroiderer and seamstress for the Sorelle Fontana, a well-known fashion house in the 50s and 60s. But Matteo had never embroidered. Self-taught, but having unwittingly absorbed from his family, he took acrylic wool and started to cover the picture. One thread after the other, as though they were overlapping strokes giving more and more volume. Adding fabric scraps and then coloring and embroidering with thread. “It took me a long time” he says “I worked at it everywhere. I took the frame and the quilt I was embroidering with me everywhere”. He stresses: “yes, it really did take me a long time. I’ve learned now, and the execution is faster”.

From the first to the last tapestry

Here is the frame that he works with,by blocking, thanks to tacks, the fabric on which he transposed his recurrent theme. Behind the frame you can see another tapestry, Untitled, one of his last works dating 2018. I took this picture in his studio. The first one.hanging on the wall.is the drawing.

This is “Patchwork Ball – Le cose non crescono al buio” (Things don’t grow in the dark). This special punching bag, or pungiball, is a whole different story. “I created it because I was tired of wall hangings” Matteo says. Why this title? “Things don’t grow in the dark means that to reach a goal you have to sweat and work a lot”. True! Just like embroidering, which is a repetitive and slow gesture, made by hand and carefully. Matteo liked the idea of the pungiball because he wanted to create an object to punch but also to hug when in difficulty. The idea materialized as an explosion of greens, pinks, blues, yellows, brown and ochre. What came up is a very vivid work.

This tapestry is set in a very distant world: it is inspired by the vision of San Francis on the Verna mount, in 1224. The work “La Verna” has been exhibited up to November in the former Cistercian  Monastery of Fontfroibe Abbey, in South France, and has now been acquired by Mrac, the Museum of Contemporary Regional Art of Occitania (France).

Legend has it that on the mountain where the sanctuary of La Verna now stands in the province of Arezzo, St. Francis received the stigmata two years before he died. He had a vision of God in the form of a crucified Angel Seraphim who imprints the signs of Jesus’ passion “A terrifyingvision. Because the Seraphim has flaming wings. When he meets God St. Francis sees fire, sees hell”. Matteo recreated the observation point of St. Francis, excluding his figure from the image. There is a spiral mountain, there are lightning giving movement. And then there is firein the background, although protagonist as well. I also inserted gold threads that give an iridescent tone, reflecting light”.

The artist’s journey also includes very geometric, architectonic artworks, such as the colorful installations disseminated among trees in the Botanic Garden of Palermo

This is a soft, sweet artwork. Both to the touch and to the vision. It’s called Sleepy Night. It comes from “a somewhat funny dream” the artist explains “I dreamed of a caravan in the middle of the desert, at night. It passes me by but I don’t follow it. I touch the ground and feel the stones soft. A person passes by and explains that stones are like thatat night! I then woke up with the image of “NotteAddormentata, Sleepy Night”, and I created a sort of sky that falls asleep on the mountain. There are planets, stars, suns”. The result is a large, six-meter work made of foam on the inside, hand-embroidered on the outside.

As the years go by, 10 since he left Riccardo Muti’s orchestra, Matteo Nasini explored various ways of expression with fabric and music. In some cases, he put them together as in the “Neolithic Sunshine” concert and as in the concert organized at the Galleria d’ArteModerna in Rome in 2017 and that is still staged: Sparkling Matter.

“I created a software that transforms brain activity data into audio signals. Then I connected the encephalogram to a sleeping person. 16 electrodes become 16 audio signals which, depending on the phase of sleep, create different harmonies. At certain moments they are very dilated sounds. In others more energetic. The Sleep Concert starts with a person who falls asleep and is followed by others. The first to sleep – Matteo explains – is “a professional sleeper. The others can stay and listen to the harmonies created by the sleep of the sleeper in real time and propagated through speakers”. Each speaker is associated with a different electrode in the encephalogram

Here is an example of the audio that can come out of it:

And that’s not it. The connected brainwaves have also become sculptures. Andon that occasion in order to connect the fabric, Matteo created covers with fabrics digitally printed from his drawings and then woven on fleece. The Sparkling Matter project received the 2016 Talent Price, and was also presented at Palazzo Fortuny during the Venice Biennale in 2017.